Dauphin Island vs. The Hurricanes 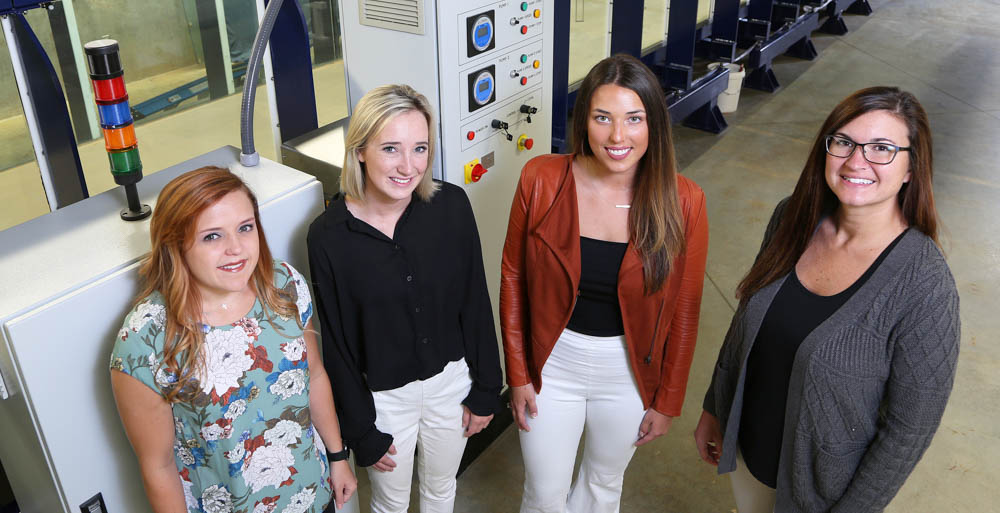 University of South Alabama engineering students Brittany McMillan, Peyton Posey and Evan Mazur are researching storm surge impacts on barrier islands with Dr. Stephanie Smallegan, assistant professor of civil, coastal and environmental engineering. Behind them is the College of Engineering's wave flume, which can be filled with water and manipulated to simulate various wave actions found in landfalling hurricanes.

There’s a hurricane in the Gulf and it’s going to make landfall at Dauphin Island. Trouble? You bet. But just how much trouble could depend on what faculty and student researchers at the University of South Alabama are learning this summer about hurricane impacts.

Dr. Stephanie Smallegan is an assistant professor of civil, coastal and environmental engineering. She and two of her students are using computer models to simulate hurricane impacts on barrier islands such as Dauphin Island, and then analyzing the results.

Smallegan previously developed computer modeling of Hurricane Sandy’s impact in 2012 on New Jersey barrier islands. “We learned with Sandy just how detrimental elevated water levels on the bay side of a barrier island can be in terms of damage, the benefit of large dunes and a wide beach, and that coastal infrastructure can play a major role in increasing or decreasing damage as the island becomes inundated,” she said.

“Although these things may not sound profound when you think about it from a common-sense point of view, it is impressive when you realize that we used a computer model to obtain quantitative estimates of each of those points.”

Smallegan is now applying a similar approach to the Gulf Coast region, specifically Dauphin Island, to determine the extent to which hurricane conditions might affect it, and possible efforts to mitigate the damage now and in the future as sea levels continue to rise.

Fresh data is critical when developing computer models on hurricane impacts. That’s why Smallegan was one of the first researchers on site just days after Hurricane Harvey devastated coastal Texas last year. She was there to get data.

“We collected sediment samples, conducted shear strain and penetrometer tests,” Smallegan said. “We focused on beach erosion, impacts (due to forces other than wind) to coastal infrastructure and scour around bridge piles.” She surveyed geotechnical, or subsurface, damage in a broad coastal area from Corpus Christi to Galveston.

Smallegan was asked to be there by the Geotechnical Extreme Event Reconnaissance association, an organization funded by the National Science Foundation that sends researchers and practitioners rapidly to the field to collect perishable data following natural hazard events.

“We use data collected prior to a storm's landfall to force our model,” Smallegan explained. “We simulate hydrodynamics (waves, water levels, currents, etc.) and morphological change (erosion, deposition), then compare the model results to data collected just after the storm. This is a really powerful tool because it not only validates the model itself, but it also allows us to analyze specific processes that are either impossible or nearly impossible to directly measure during a storm.”

Graduate student Brittany McMillan and junior Evan Mazur are working with Smallegan as they develop their own research projects with the use of computer models and Smallegan’s first-hand research experiences.

McMillan’s thesis will analyze whether a beach nourishment project on the west end of Dauphin Island would decrease the impact that a hurricane would have on the island.

Using a numerical computer model called XBeach, Mazur created a synthetic storm in order to develop a broader understanding of the research process. The model’s flexibility is a huge plus.

“Essentially infinite amounts of data can be created for the model and, in turn, used as a predictive measure for future storms,” Mazur said. “The method developed and resources used in my project have the ability to take data from storms past, or synthetic ‘made up’ storms, and apply its storm forces to a specific location. Through looking at numerous storms with varying storm parameters, we can have a better understanding of the quantitative damage done by these high-impact storms.”

A third engineering student, junior Peyton Posey, is going in a different direction. She is researching the site characteristics of barrier islands hit last year by three Gulf of Mexico hurricanes; Harvey, Irma and Nate. She has observed that beach and barrier island damage is typically much greater near beach access roads that transect dune fields.

“Because of those observations, it is hypothesized that beach access points increase the vulnerability of beaches and barrier islands to damage during hurricanes,” Posey said. She is studying select coastal communities in Texas, Florida and Alabama to assess characteristics such as beach widths, dune heights, vegetation coverage and density, and surrounding civil infrastructure such as beach access roadways.

One of the common threads throughout these different research projects is Dauphin Island, which presents itself as an ideal case study for Smallegan and her students.

“From a geotechnical damage perspective, the damage to Dauphin Island actually exceeded the damage I observed in Texas after Hurricane Harvey and what some of my other colleagues experienced in Florida after Hurricane Irma,” Smallegan added. “As many of our locals know, the west end was closed for several months while clean-up crews pushed sand from the roadway back onto the beach. That overwash is a common response of sandy barrier islands to hurricane waves and storm surge.”

Smallegan is hopeful that a common response to their research results is even greater engagement of Dauphin Island stakeholders, such as property owners, businesses, governments and tourists. The findings may lead to real-world solutions for governments and citizens to consider as they balance their wants and needs with an environment that is subject to dramatic, and costly, changes.

“Collectively, we are all trying to increase the resiliency of our coastal communities and we're looking at a lot of different ways to do that,” Smallegan concluded. “It is very important for anyone living in a coastal area, especially somewhere like Dauphin Island, to remember that any decision they make on their own does not just affect them. Sandy beaches in particular are very sensitive to any changes, even small ones, so always - always - question your decisions before executing. Otherwise, there really could be detrimental consequences to the beach.” 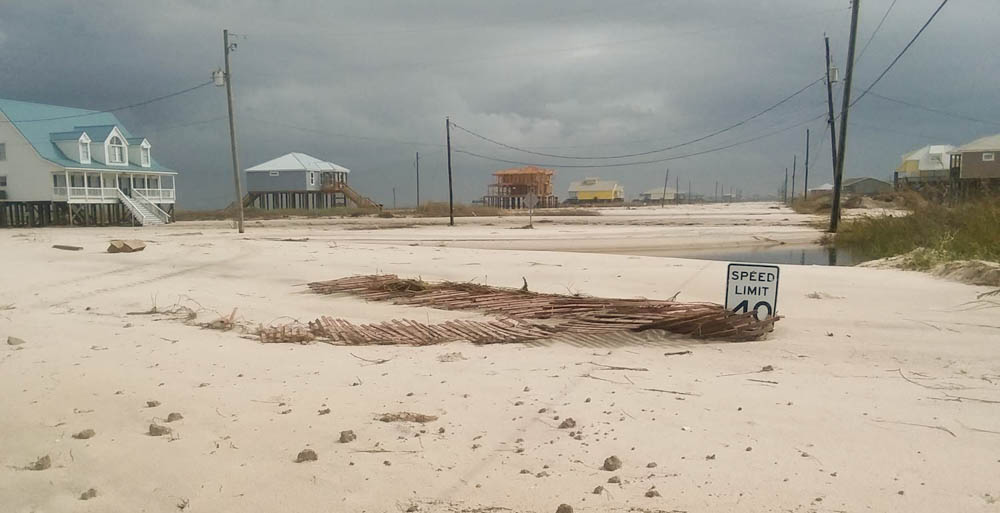 Somewhere under all that sand is Bienville Boulevard on Dauphin Island. The 40 mph speed limit was in no danger of being exceeded after Hurricane Nate relocated tons of sand onto the barrier island's major thoroughfare. Photo courtesy of Dr. Stephanie Smallegan