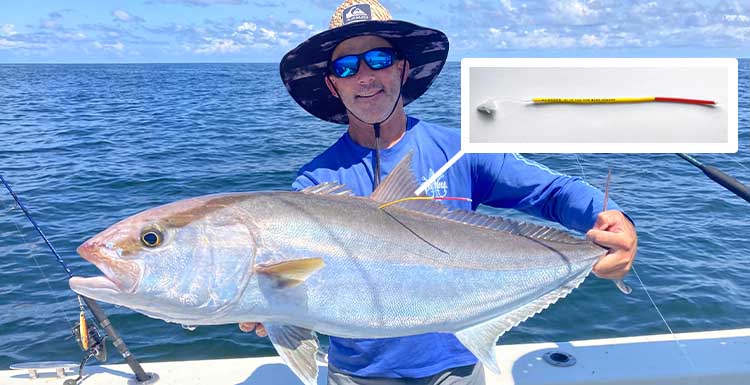 Captain Brett Falterman of Fish Research Support displays a conventionally tagged greater amberjack before releasing the fish off the coast of Louisiana. Photo insert: Each of the small, colorful conventional tags will display a unique five-digit number and a telephone number to call to claim a $250 reward. (Photos courtesy of Dr. Michael Dance, Louisiana State University and Dr. Marcus Drymon, Mississippi State University.)

Dr. Sean Powers of the University of South Alabama is leading a team of researchers in an $11.7 million study of the greater amberjack species. Similar to the Great Red Snapper Count, the Greater Amberjack Count’s overarching goal is to estimate the number of greater amberjack in the U.S. South Atlantic and Gulf of Mexico, though additional objectives focus on understanding movement patterns and collecting biological information.

Funded by the National Sea Grant College Program and National Oceanic and Atmospheric Administration Fisheries, the project could have significant implications for commercial and recreational fishing and coastal economies supported by those industries.

According to NOAA Fisheries, greater amberjack in the U.S. Gulf of Mexico are overfished despite a decades-long rebuilding effort. In contrast, the U.S. South Atlantic stock is not overfished. Understanding how these two separately managed stocks are connected is vital for enacting proper management guidelines.

Recognizing a lack of biological and ecological information about greater amberjack, Congress appropriated $5 million to NOAA Fisheries and $5 million to Sea Grant for the amberjack study. Matching funds from institutions bring the total budget to $11.7 million. A team of 18 scientists from 13 institutions are working on the Greater Amberjack Count. These include Auburn University, Texas A&M University, Louisiana State University and the University of South Florida. Also involved are Sea Grant programs from several states ranging from North Carolina to Texas.

Some greater amberjack will be fitted with acoustic tags – electronic transmitters surgically implanted inside a fish’s body cavity. These tags emit signals unique to each fish, and the signals are recorded by an array of strategically placed underwater acoustic receivers or “listening stations.” A total of 450 acoustic tags – one per greater amberjack – will be deployed throughout the U.S. South Atlantic and Gulf of Mexico from North Carolina to Texas.

The conventional tags used for this project are designed for high visibility, with yellow coating at the base (closest to the fish’s body) and red coating at the end. One side of the tag contains the tag number (“AJ” followed by five digits) and instructions to clip the tag for a $250 reward. The other side contains a phone number and reprinted tag number. The conventional tags will be placed on each fish’s back beneath its second dorsal fin. If a fish is double-tagged, there will be one tag on each side of the fish.

The success of the conventional tagging study critically depends on participation from fishers of all sectors. Upon catching a conventionally tagged greater amberjack, fishers should call the phone number printed on the tag(s) to report the recapture to the Greater Amberjack Count project team. In addition to the tag number(s), fishers will be asked to provide other information, including the fishing sector, date the fish was caught, fish’s length and weight, and latitude and longitude where the fish was caught. Each tagged greater amberjack, regardless if it has one or two tags, will carry a reward of $250.

Fishers who catch a conventionally tagged greater amberjack, report their recapture information and return the conventional tag(s) to the research team will receive a $250 reward. The physical tag must be mailed in to claim the reward, so fishermen should clip off and save the tag(s), even if they plan to release the fish. If a fish is double-tagged, fishermen will need to clip, report and return both tags to receive the reward.

Data from the conventional tag returns and other components of the Greater Amberjack Count will ultimately be used by scientists to estimate the number of greater amberjack in the U.S. Gulf of Mexico.