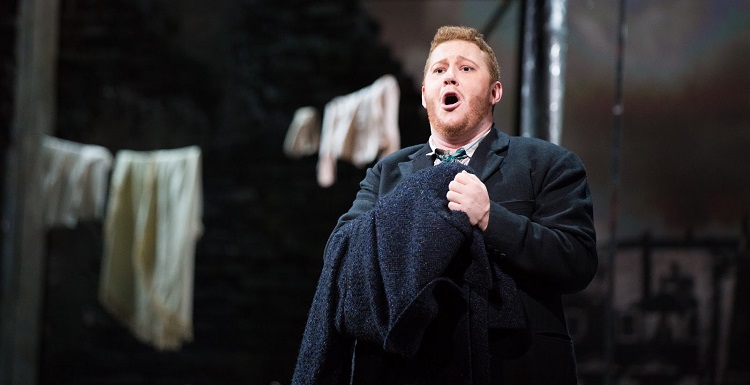 University of South Alabama graduate Nicholas Brownlee was one of two American singers to make the finals at the 35th International Hans Gabor Belvedere Singing Competition, and the only bass-baritone in the final round.

The win gave Brownlee, a 2012 alumnus, more than $7,748 as the top performer, and he was offered contracts with two international opera companies.

“Winning this competition is one of the closest things to being an Olympian I will ever have,” Brownlee said. “The pride I am feeling is like no other.”

He was one of two American singers to make the finals, and the only bass-baritone in the final round. He competed with 853 singers worldwide and was one of 16 finalists competing in the semi-finals and finals round.

“I was instantly filled with emotion and adrenaline,” he said of winning. “Because of the structure of the competition, I had to sing after being announced I was the winner. In my mind I was saying, ‘I have to sing again, like now?’ It was a unique and amazing experience.”

Brownlee will make his Metropolitan Opera debut on Dec. 5 in the production of Richard Strauss's “Salome.” In 2015, Brownlee won the Metropolitan Opera National Council Auditions, one the highest achievements for an opera singer and the pinnacle of opera competitions in the United States.

While studying at South, Brownlee was a voice student of Dr. Thomas L. Rowell, area coordinator of vocal studies and director of the USA Opera Theatre.

“It’s always a thrill to see your graduates do well in their careers,” Rowell said. “But, watching Nick’s success has taken that to an entirely different level for me. I have been very fortunate to have taught many outstanding singers during my career at USA, and Nick is definitely one of the best.”

Rowell watched Brownlee’s performance via online streaming. He said it was a tough competition since there were other world-class singers competing with Brownlee. Rowell said Brownlee represented the United States, Alabama and the University beautifully.

“It was a proud moment for me to watch how he accepted the win with the class and gracious humility he has always displayed in such moments,” Rowell said. “One of the most satisfying aspects of watching Nick perform and win was to hear him sing “Come dal ciel precipita” from Verdi’s Macbeth, which was one of the arias I assigned him when he was an undergraduate at USA for his first national competition at the Metropolitan Opera National Council Auditions.”

Rowell said Brownlee is representative of the talent South’s department of music has been able to recruit and nurture during the past decade.

Brownlee said this summer is one of competitions for him. He will now prepare to compete in Guadalajara, Mexico, for Placido Domingo’s Operalia competition. He will then return to Los Angeles to begin his final year in the Domingo-Colburn-Stein Young Artist Program at the Los Angeles Opera.

Brownlee graduated from Theodore High School in 2007, where he was active in the choral program under the direction of Karen Combs, and he began his studies at South with the intent of becoming a high school choral director. With the support and direction of Rowell, Brownlee changed his focus to pursue a career as an opera singer.

“Without the South Alabama opera program and their fearless leader Dr. Thomas Rowell, I would never have discovered opera,” he said. “He truly goes over and beyond with each one of his students. I also owe a lot to Dr. Greg Gruner, chair of the department of music, and Dr. Laura Moore, associate professor of music.”

During his final years at USA, as well as his time at Rice University as a graduate student of Dr. Stephen King, Brownlee was accepted into major prestigious operatic apprentice summer programs, including programs in China, Italy, Israel, the Wolf Trap Opera Program and the Santa Fe Opera.