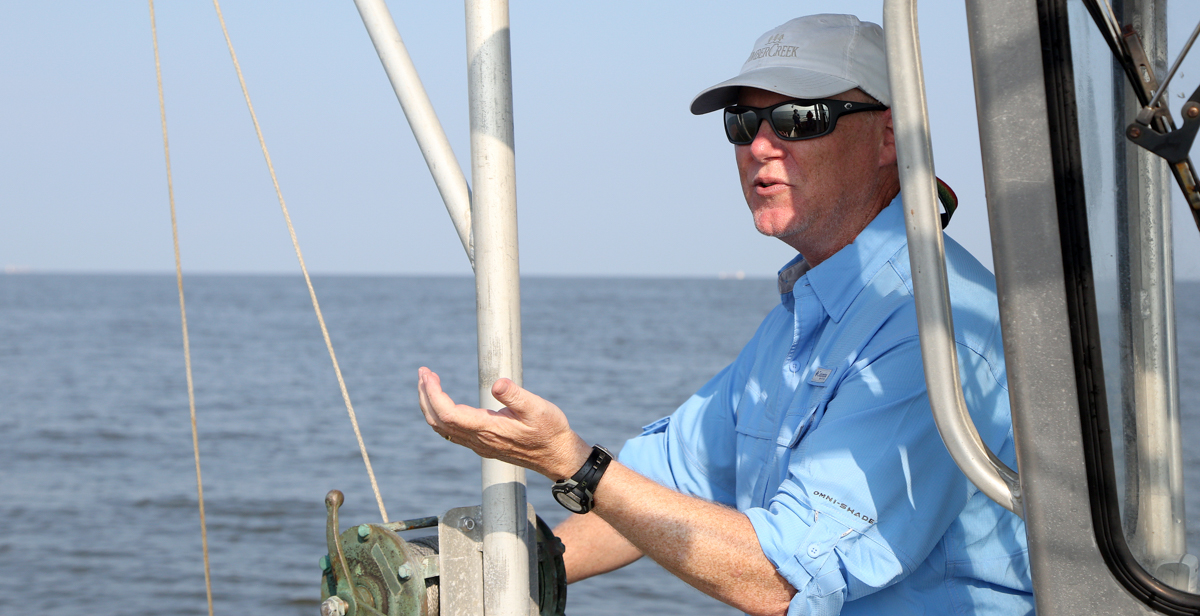 Professor of Marine Sciences Dr. John Lehrter, on a vessel off the Alabama coast in 2021, is leading a study to arrive at a baseline for water and sediment quality in the area. “At a really fundamental level, this project is about going out, very frequently, and trying to get the pulse of state water quality. Where are the places we have to worry about, and what are the places that have good quality?”

Dr. John Lehrter and the University of South Alabama School of Marine and Environmental Sciences will play a lead role in a $3.1 million project to study water and sediment quality along the Alabama Gulf Coast.

The three-year program will be funded by the Alabama Gulf Coast Recovery Council with money from the BP oil spill settlement. After federal approval from the Gulf Coast Ecosystem Restoration Council, water and sediment testing should begin in 2023.

“We don’t have a good quantitative baseline for where we are,” said Lehrter, professor of marine sciences. “Without that baseline, we don’t have a good way to tell the story, 20 years from now, after we spend hundreds of millions of dollars on projects that are improving water quality.

“At a really fundamental level, this project is about going out, very frequently, and trying to get the pulse of state water quality. Where are the places we have to worry about, and what are the places that have good quality?”

Dr. Sean Powers, director of the School of Marine and Environmental Sciences, noted that the project will offer public information on water quality websites for everyone from fishers to environmentalists and homeowners.

“Every time people click on that information,” he said, “they will be reminded of the important work done by USA researchers.”

Contributing to the Alabama Gulf Coast Recovery Council project will be marine scientists from Auburn and North Carolina State University. There also will be researchers and graduate students from the Dauphin Island Sea Lab.

“I’m hoping that this program will become a platform,” Lehrter said, “for students and post-docs to do their own projects.”

The research plan for the next three years includes emerging concerns such as testing for algae blooms and red tide outbreaks. These blooms often kill fish and leave noxious fumes, while toxins accumulate in sediment along the Gulf of Mexico.

“That’s something that hasn’t been quantified, at least in Alabama,” Lehrter said. “In the fall, we have red tide that migrates up the coast from Florida, and we begin to see it in September and October. It’s kind of a tourism issue.”

The Alabama Department of Environmental Management monitors water quality throughout the state, but much of that work is focused on larger bodies of water such as Mobile Bay. The Recovery Council program hopes to cover the rest of the coast.

“One of the goals of this work is to focus on smaller water systems where human activity poses the most problems,” Lehrter said. “We’re talking about water systems such as Bayou Sara, Three Mile Creek and Dog River.”

In 2016, Lehrter joined the faculty at South. He had spent 13 years working for the Environmental Protection Agency at a lab in Gulf Breeze, Florida, near Pensacola. He wanted to do less administration and more research.

Lehrter is also the lead primary investigator on a multimillion-dollar RESTORE grant from the National Oceanic and Atmospheric Administration. South is completing work on a $2.1 million grant from GOMESA — the Gulf Of Mexico Energy Security Act — that will improve research facilities at the new home for the School of Marine and Environmental Sciences.

Equipment includes mass spectrometers, along with controlled-environment clean rooms and lab spaces that allow for low levels of contaminants in research procedures. Some equipment is being moved from the Dauphin Island Sea Lab to the main South campus.

“That’ll be a huge benefit,” Lehrter said. “Every time we have a tropical storm, it’s a concern on Dauphin Island.”