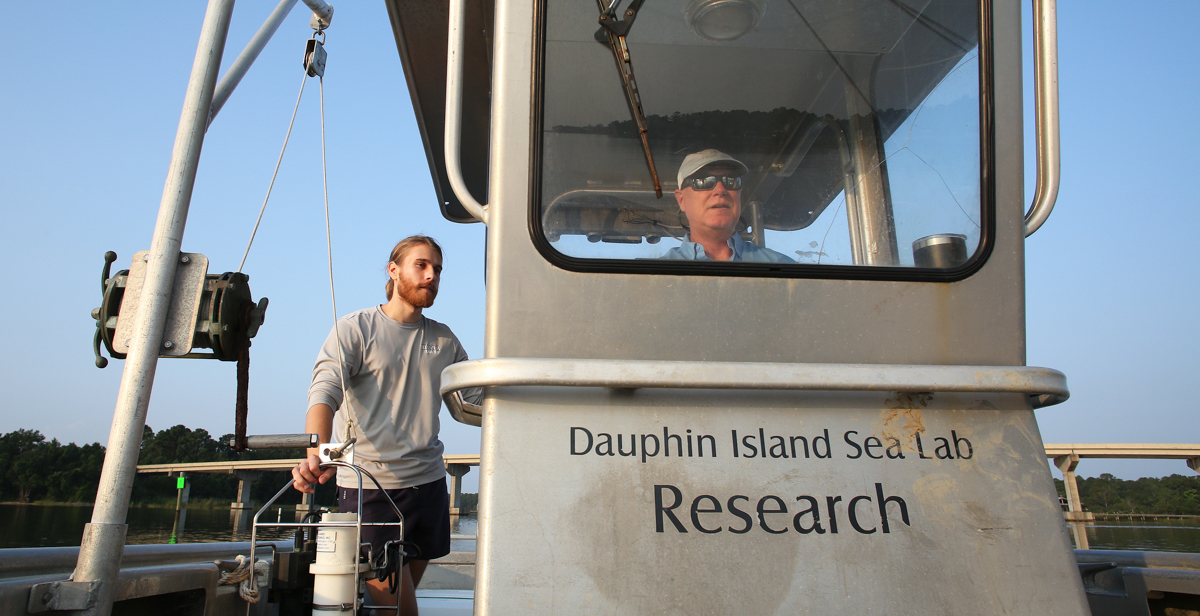 Dr. John Lehrter, associate professor of marine science, pilots a boat through Mobile Bay, where he and graduate Chris Mikolaitis took water samples to measure the health of its marine ecosystem.

Each month, Dr. John Lehrter and his South graduate students collect water samples throughout Mobile Bay. They test for temperature, pH, salinity and oxygen levels. They look for changes or patterns that might indicate environmental stresses such as hypoxia, acidification and global warming.

“We’ve had lots of rainfall this year,” said Lehrter, a professor in the School of Marine and Environmental Sciences, during a July survey. “We hypothesize that this will lead to a greater area of hypoxia, low oxygen levels in the bay, but we haven’t seen it yet.”

Even at 7 a.m., it feels hot when he and a graduate assistant head out in a 24-foot aluminum work boat from Dauphin Island Sea Lab. There’s little wind, so the bay is calm and flat. That means they can hit speeds of 40 knots as they crisscross the bay.

In just two days, they collect bottom and surface water samples from 30 different sites. At those locations, and another 30 sites, they lower a submersible instrument that measures temperature, oxygen and salinity at different depths. They stop for just a few minutes to record data, then head to the next spot 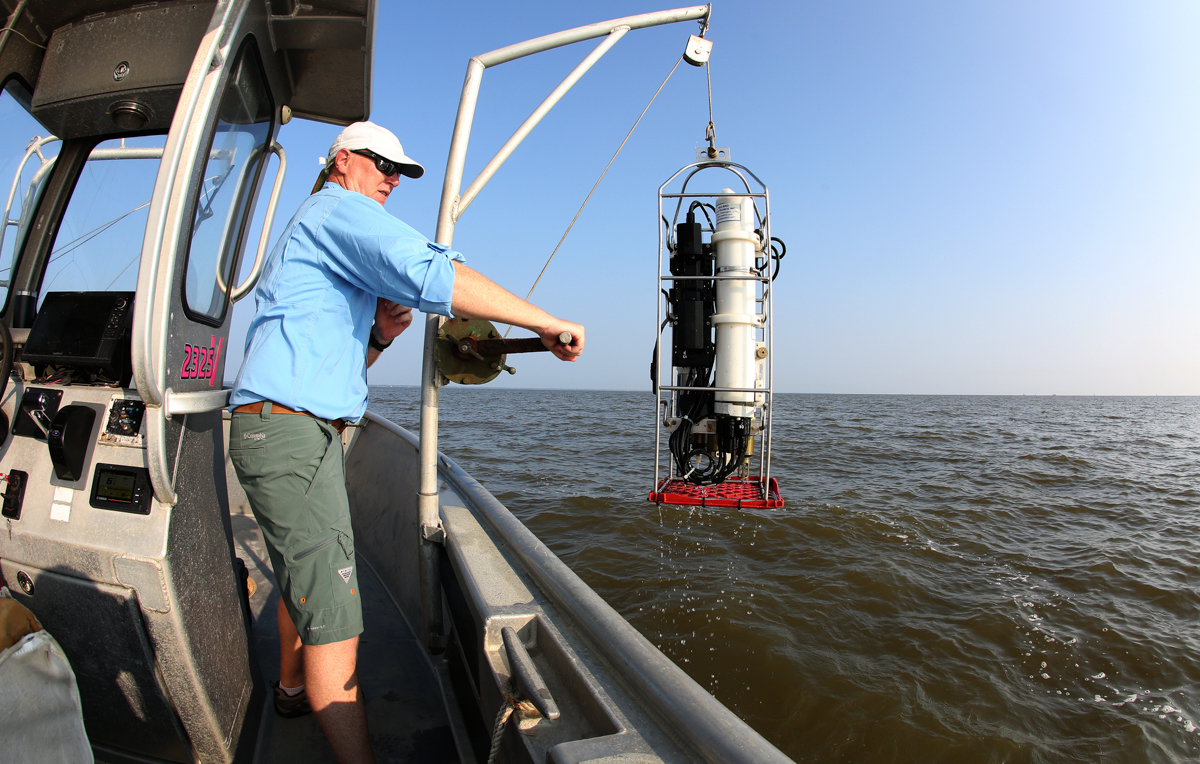 Mobile Bay is huge – more than 400 square miles – and their test sites range from the Tensaw River near Blakeley State Park all the way down the Eastern Shore and across to the Mississippi Sound.

Surveying the bay is part of a five-year, $2.8 million research program funded by the National Oceanic and Atmospheric Administration. Researchers from the University of South Alabama are joined by scientists from several other universities. Partners include the Mobile Bay National Estuary Program and the Alabama Department of Conservation and Natural Resources.

“We know that the oyster population of the bay has really suffered,” Lehrter said. “We’re almost at historical lows, and there’s probably a number of reasons for that. Partially, it’s overfishing, but there have also been changes to their habitat and water quality. That’s something that’s not specific to Mobile Bay. That’s something we’re seeing across the Gulf of Mexico.”

The water quality of Mobile Bay is better now than it was during the mid-20th century, when there were huge paper mills and aluminum plants near the Port of Mobile. Local issues for the 21st century include water quality and rapid development along the Eastern Shore. More serious threats include global trends related to climate change.

“I worry about the delta,” Lehrter said. “It’s a freshwater, sometimes salty system, and the plants up there don’t tolerate salt very well. If sea level rise continues to occur, there’s more introduction of salt into those environments, and things like cypress and tupelo gum, the tree species that underlay the delta and maintain it, those are going to change, those are going to die off and transition to other environments. Going forward, we don’t have a lot of information about that.”

In 2016, Lehrter joined the faculty at South. He had spent 13 years working for the Environmental Protection Agency at a lab in Gulf Breeze, Fla., near Pensacola. He wanted to do less administration and more research.

Most of the Mobile Bay is shallow, just 10 feet deep, but dredging of the main shipping channel creates depths of 50 feet. Most of the water is murky, with visibility measured in inches.

“A lot of people here locally think it’s a dirty system, because it’s not real clear water, like we have over in Orange Beach or Pensacola Beach, but that brown water is what I study, so to me it’s just a big, beautiful bay,” Lehrter said. “The delta is a unique transition from the freshwater to the ocean, with that big swamp and backwater area. We’re doing more and more work up in that northern part of the bay.” 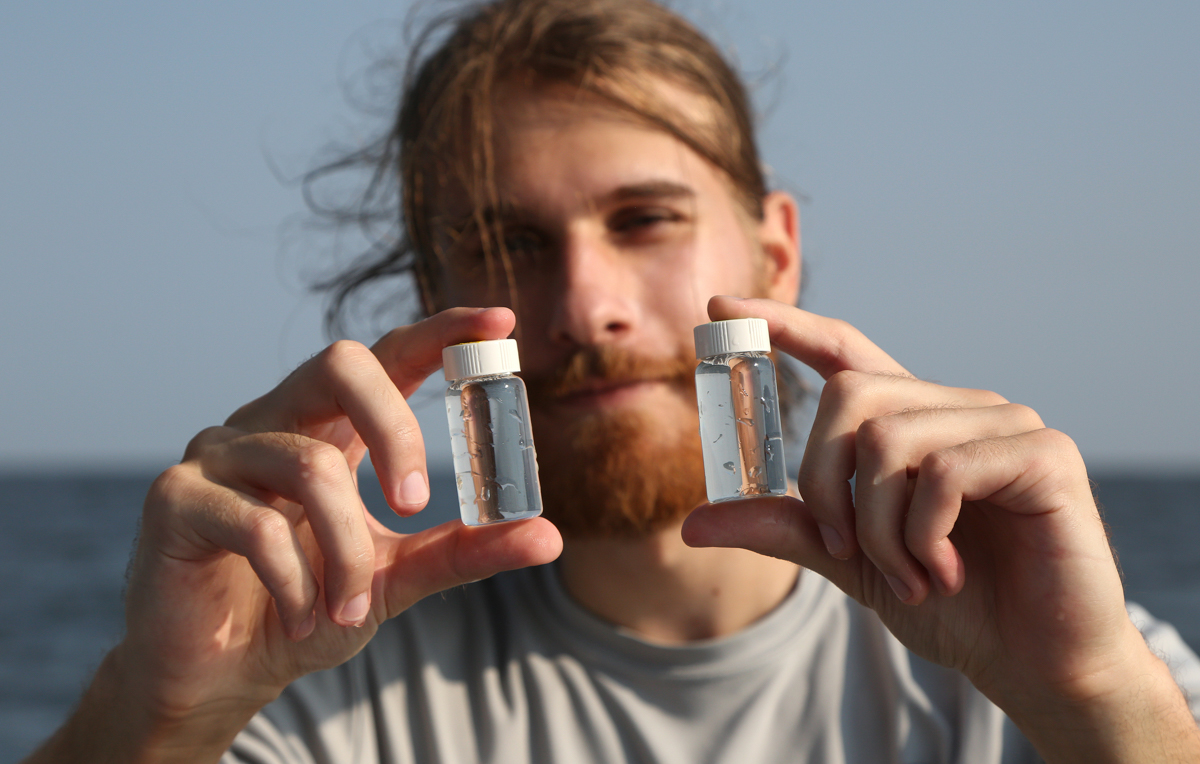 Graduate student Chris Mikolaitis holds water samples collected from Mobile Bay. “No matter where you go in marine science, you’re always looking at a profile of temperature, salinity, pH and oxygen,” he said.

Chris Mikolaitis, a graduate student at South, grew up sailing off Long Island, N.Y. That led him to a shellfish restoration project and a bachelor’s degree in marine science. For graduate school, he heard about Dauphin Island Sea Lab, and headed to Mobile.

“The bay is a lot bigger than where I’ve worked before,” he said. “It’s not normal for me to look across and not see the other shore.”

Mikolaitis has begun work on his master’s thesis, which will study the effects on sea life of cadmium, a heavy metal pollutant, at different levels of salinity. He enjoys field work, including monthly water sampling on Mobile Bay.

“It’s awesome that I get to work with this data,” Mikolaitis said. “No matter where you go in marine science, you’re always looking at a profile of temperature, salinity, pH and oxygen.”

On their boat in Mobile Bay, the South researchers pass small shrimp boats and huge container ships, along with historic sites such as the Middle Bay Lighthouse, which began operation in 1885.

On the Eastern Shore, local history includes jubilees, which are the rare days when fish flee low-oxygen water and people can scoop them up near shore.

Mapping low-oxygen areas will help scientists learn more about Mobile Bay and how to manage its fisheries.

“During the summer months, when it gets really hot, we also have widespread low oxygen throughout the bay,” Lehrter said. “So critters like oysters, which can’t move, they’re just exposed to low oxygen. For fin fish and crabs, those animals can move, but the low oxygen becomes so widespread it literally becomes what’s called a dead zone. We’re trying to get a better understanding of what drives that phenomenon.”