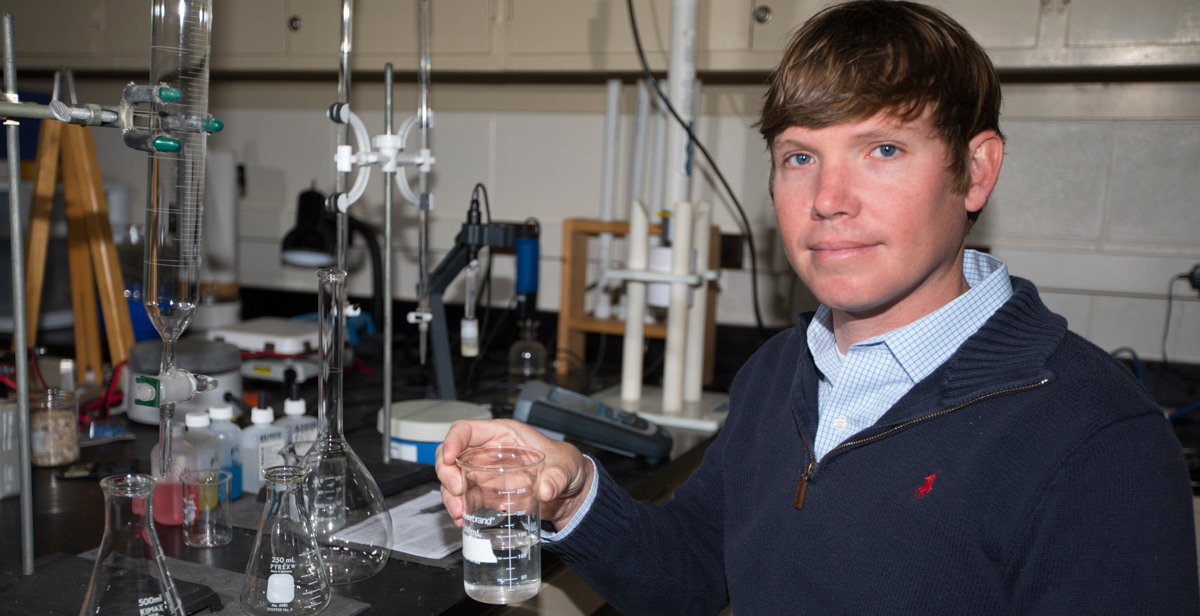 Dr. Alex Beebe, an associate professor in the department of earth sciences, said an adult requires a minimum of about three liters of water each day to survive. The average U.S. citizen uses more than 200 liters every day.

Mention natural resources, and water is likely lower on the list, despite being the most important.

However; a report released this week by the World Resources Institute reveals that there are 17 countries, home to one-quarter of the world’s population, that currently face extremely high water stress. Just last year, residents of Cape Town, South Africa barely averted the water supply depletion deadline known as “Day Zero” through a combination of emergency water restriction efforts and timely summer rains. Just as Cape Town began to recover, a new water crisis emerged in Chennai, India’s sixth-largest city which has almost no water left in the reservoirs.

“Google ‘the importance of water’ and the results list everything from the search for extraterrestrial life to natural disasters around the globe,” said hydrogeologist and environmental geologist Dr. Alex Beebe, whose research focus is all things water. “The existence of every living thing on Earth depends on our water supplies and how well we protect them, and that’s why what’s happening world-wide should interest all of us.”

Beebe’s six reasons to conserve water, even in the rainiest metropolitan area in the nation:

1. Water is without a doubt the most important natural resource

As far as we know, life cannot exist without water. Our bodies use water to dissolve vitamins and nutrients, flush toxins and control body temperature, among other things. About 60 percent of our bodies are made of water, and we cannot survive more than a few days without water. Beyond just humans, biologists have yet to discover any life form that does not require water. In fact, we have spent billions of dollars exploring our solar system and beyond searching for water because it gives the best chance of finding extraterrestrial life.

2. Water is used in about every aspect of life

Depending on climate, an adult requires a bare minimum of about three liters of water each day to survive. We use much more than that though; the average U.S. citizen will consume more than 200 liters every day. Why do we use so much? Almost every aspect of our modern lives requires water. For example, a single toilet flush consumes about six liters of water, so you could say that we are casually flushing our water resources down the drain. Although residential and commercial withdrawals are important consumptive uses, only about 12 percent of water withdrawals are used for public supply. Crop irrigation and thermoelectric power production consume more than 77 percent of the water that we withdraw each year.

3. Although the Earth is covered with water, most of it is unusable or inaccessible

From space, the beautiful arrangement of Earth can be attributed to the presence or lack of water. Vast blue oceans cover 70 percent of Earth’s surface, lush green landscapes rich with life surround moist land areas, drab desert landscapes note the absence of water, and brilliant white ice sheets line the poles. Even though most of the Earth is covered with water, only a small fraction is readily available for our consumption. The oceans contain 97.5 percent of all water on Earth but, unfortunately, there is no easy way to remove salt from seawater. Seawater is unfit for drinking, irrigation or really consumption of any kind. Of the remaining 2.5 percent of water on Earth not contained within the oceans, 1.7 percent belongs to ice caps and glaciers which are also inaccessible for the time being. Fresh groundwater is the largest source of consumable water, containing slightly less than 0.8 percent of global water. Surface water bodies, including Big Creek Lake (from which USA receives its drinking water), contain less than 0.02 percent of global water. As Samuel Taylor Coleridge penned in his famous 1798 poem “The Rime of the Ancient Mariner,” about a sailor lost at sea, “Water, water everywhere, nor any drop to drink.”

The past decade has been plagued by a number of severe and exceptional droughts capturing the headlines. California recently recovered from a historic five-year drought that forced a number of water restrictions. Atlanta faced an exceptional drought in 2007-2008 that took local reservoirs down to record low levels. Climatologists predict that shifting climate patterns associated with global climate change will make droughts more frequent and longer in duration. More immediate, though, is the fact that human consumption and withdrawal has been identified as a major contributor to droughts. For instance, the 2007-2008 exceptional drought in Atlanta was actually no worse than several other droughts in the last century; however, the effects were much more severe because of recent population growth and accompanying water consumption.

5. Too little water is a problem in many regions, but too much water can be just as bad

While droughts threaten water resources in certain regions, too much water can induce a host of dangerous problems. In Mobile, we receive more than five feet of rainfall per year on average. While we are blessed to have almost unlimited water resources, torrential rainfall prompted by slow moving fronts and tropical cyclones can cause deadly flash flooding and severe erosion, including bridge washouts. Hurricane Harvey, which struck the Houston region of Texas in August two years ago, is now tied with Hurricane Katrina as the costliest tropical cyclone on record, inflicting at least $125 billion in damage and causing 108 confirmed deaths. The source of the destruction behind Harvey was not the intense winds, but the 30 inches of rainfall dumped on the Gulf Coast over a 48-hour period.

In light of recent water emergencies, scientists and regulators are working hard to develop innovative strategies to prepare for natural disasters like droughts and flooding. In the last two decades, a number of municipalities in drought-prone regions like California have begun implementing water reclamation systems that use treated wastewater for beneficial use, such as crop irrigation and livestock watering. In areas where persistent flash flooding is a concern, low-impact development practices including permeable pavement and rain gardens are being used to capture the pulse stormwater following heavy precipitation. Many of these low-impact development practices have been implemented here at the main campus of USA. The key to any disaster prevention is to continue to remain proactive.

Dr. Alex Beebe is an associate professor in the department of Earth sciences, where he teaches and studies hydrology. Beebe received his B.S. in geology and biology from the University of South Alabama and went on to complete his Ph.D. at Clemson University. Since returning to USA, he has focused on investigating the complex interactions between surface and groundwater in coastal estuaries like Mobile Bay.