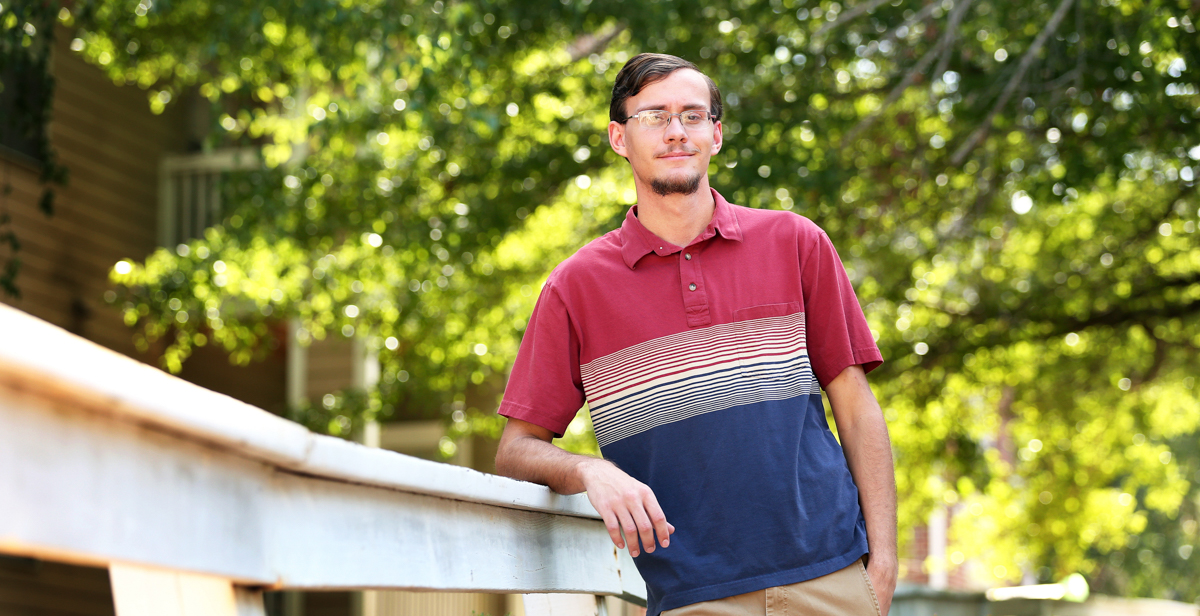 Clayton Suell, an engineering senior at the University of South Alabama, was recognized with an Alabama Space Grant Consortium Award.

In the IMPACT Lab at the University of South Alabama, Clayton Suell studies artificial intelligence networks that allow systems to become aware of what work people are doing, what tools they’re using and what help they might need.

One of the applications of this work could be with NASA, which helps explain how Suell won an Alabama Space Grant Consortium Award this summer.

“To be honest, when I got started, I wasn’t sure where it would go,” said the 21-year-old senior from Troy, Ala. “I came in with little or no background in this. It started out fairly basic and the project grew and it continues to grow. We’re also getting new undergraduate students to work on new areas.”

Suell works with Dr. Jinhui Wang, an associate professor of electrical and computer engineering, who arrived at South in 2018. Suell was his first research assistant. Wang jokes that this makes him co-founder of the IMPACT Lab.

“He’s special, very special,” the professor said. “In my class, he always had the answer to questions, even when they were outside the textbook. In research, he can follow his own ideas, which is very important.”

An explanation of their work might start with a few acronyms.

IMPACT stands for Intelligent Multi-Level Power-Aware Circuits and sysTems. The South lab works with what is called the Internet of Things, or IoT, which are systems of digital machines that share data over a network without human-to-human or human-to-computer interaction.

In “smart homes,” one of the popular uses of IoT technology, wireless sensors and embedded systems allow for the control of thermostats, lighting fixtures and home security systems. With NASA, one application would be to make crews on deep space missions more independent in both routine activities and unexpected events.

As an electrical and computer engineering student, Suell applies himself to practical problems. As a longtime fan of NASA, he allows himself to dream of what once seemed like science-fiction applications of work with artificial intelligence. A manned mission to Mars would be a dramatic next step to the rest of the solar system.

“The night sky is still one of the most beautiful things I’ve ever seen,” he said. “The idea that one day we might go out and explore space is astonishing.”

At South, Suell is a member of the Honors College. He keeps busy with engineering classes and IoT research. There’s no space for part-time jobs.

He makes time, though, to play the mellophone in the Jaguar Marching Band.

“When you’ve been something like that as long as I have, you don’t know life without it,” he said. “I’ve been doing marching band since the 7th grade. This’ll be my 10th marching season. It’s made a big impact on my life. It’s helped me find my work ethic in different things over the years.”

Suell grew up in Troy, south of Montgomery, and often visited Mobile with his family. Scholarship money and the Jaguar Marching Band helped him choose South for college. The Space Grant award adds another $1,500 a year.

The Alabama Space Grant Consortium, which works with seven state universities, is a participant in the National Space Grants College and Fellowship Program. It encourages undergraduate research and attracts students to the College of Engineering.

Suell has spent a great deal of his undergraduate career in the IMPACT Lab on the third floor of Shelby Hall. During some semesters, there are a half-dozen students working there. His responsibilities in the lab have increased over the last few semesters.

“He’s been accepted into the Accelerated Bachelor's to Master's Program and will begin this program in the fall,” Wang said. “He’s almost an expert. Very proficient in this area.”

When Suell sees new engineering students, he remembers getting his own start just a few years ago. He can guide them. They can help him in return.

“They’ll give you different perspectives on a problem you’re working on,” he said, “and that can sometimes lead to a solution, or a better implementation of something.”