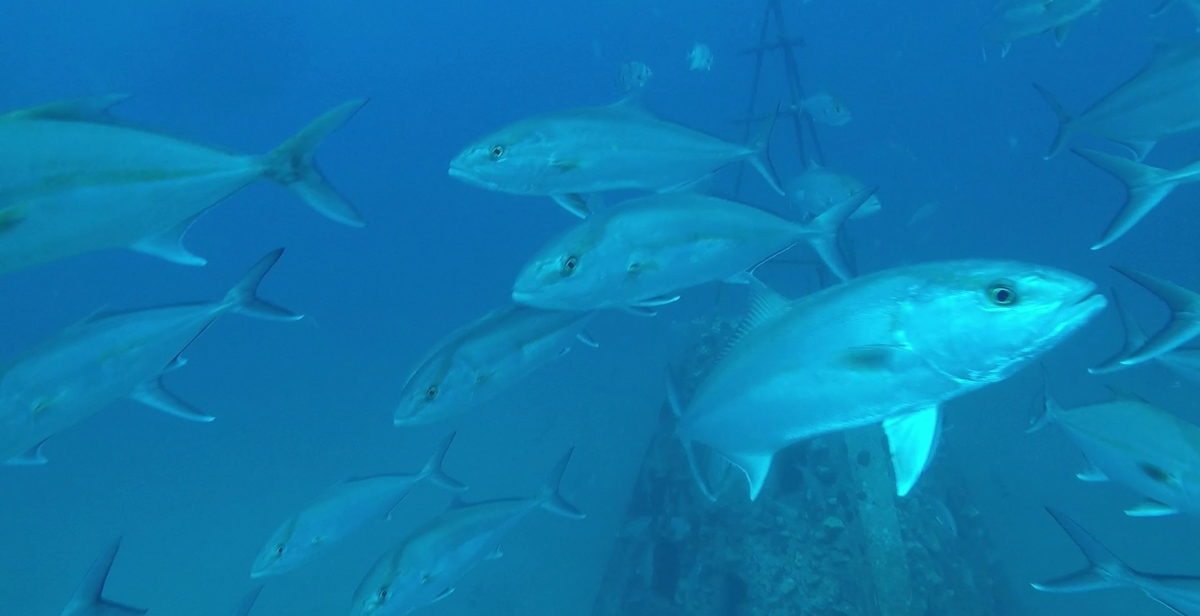 An underwater camera on a remote operated vehicle in the Gulf of Mexico captured this school of greater amberjack near a pyramid deployed by the State of Alabama to provide fish habitat. The University of South Alabama is leading an $11.7 million study in tracking and counting greater amberjack to ensure sustainable fisheries.

Less than a year after work on the Great Red Snapper Count, which changed the way scientists estimate fish populations in the Gulf of Mexico, Dr. Sean Powers of the University of South Alabama is leading a “Dream Team” of researchers in an $11.7 million study of the greater amberjack species.

The Greater Amberjack Research Project, funded by the National Sea Grant College Program and National Marine Fisheries Service, could have significant implications for commercial and recreational fishing and coastal economies supported by those industries.

This study is the first major grant for South’s new School of Marine and Environmental Sciences. The project will use some of the latest video and acoustical equipment, along with methods developed at South, to count fish in the Gulf and South Atlantic.

“The technology of underwater cameras, the resolution and our ability to measure fish, is much better now,” said Powers, chair of marine sciences at South and a senior marine scientist at the Dauphin Island Sea Lab.  “Remotely operated vehicles have gotten more accessible to researchers and allow amazing imagery to be collected. The hydroacoustics, the same instruments that give you a bottom image with a fish finder, have gotten much easier to use and afford. All of that has required a lot of development, not only of the technology, but the software to process that technology.”

The amberjack project will rely on sampling and observational work — actually counting fish — rather than previous estimates that relied on catch data from the fishery, along with complicated mathematical models.

“It’s not an easy thing to do,” said Powers, “but that’s what we did for the red snapper count, and that’s what we think we can do with the greater amberjack count.” 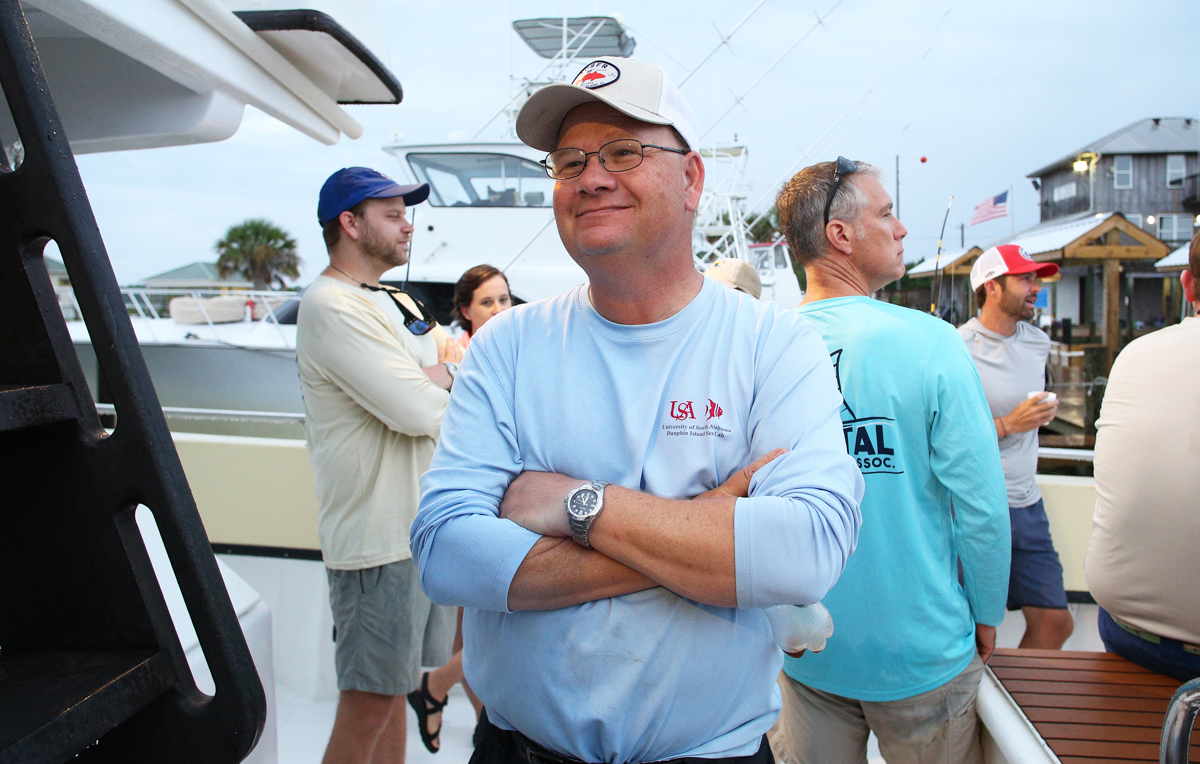 Dr. Sean Powers, chair of marine sciences at the University of South Alabama, aboard a vessel on a recent research trip in the Gulf of Mexico, said the project to count greater amberjack will use some of the latest video and acoustical equipment.

Researchers from a dozen different universities will work on the Greater Amberjack Research Program. These include Auburn University, Texas A&M, Louisiana State University and the University of Florida. Also involved are Sea Grant programs from nine states ranging from North Carolina to Florida and Georgia to Texas.

“It’s kind of a dream team of fishery ecologists,” Powers said. “We have everybody from geneticists to modelers to statisticians to oceanographers. We probably have a good 300 years of collective experience doing this.”

The goal of the program is to improve agency estimates of fish populations by developing additional data sources, assessment approaches and knowledge of fisheries.

“The Greater Amberjack abundance study in the South Atlantic and Gulf of Mexico is one way Sea Grant is helping to ensure a safe and sustainable supply of seafood products for current and future generations,” said National Sea Grant College Program Director Jonathan Pennock. “This project will provide valuable information for the management of Greater Amberjack as well as insight useful to future fisheries research and engagement.”

In 2020, Congress appropriated $5 million to the Fisheries Service and $5 million to Sea Grant for the amberjack program. Matching funds from institutions bring the total budget to $11.7 million.

“I am pleased that the University of South Alabama and Auburn University have been selected as institutions awarded grant funding for the Greater Amberjack Abundance Study,” said U.S. Senator Richard Shelby (R-Ala.), vice chairman of the Senate Committee on Appropriations. “This is great news for anglers along the Gulf Coast. The research grant will help resolve discrepancies in regard to Greater Amberjack stock assessments and inform researchers of the best ways to monitor these populations moving forward. Alabama scientists and researchers are leaders when it comes to reef fish management, and I am confident that this project will be successful as a result of their involvement.”

Dr. Steven Scyphers, who earned his Ph.D at South, is now an assistant professor of marine science at Northeastern University in Boston. He is one of the many scientists working with Powers on the greater amberjack study.

“This is an enormous project,” Scyphers said. “There are nearly 20 investigators at the highest level.”

He and his team of graduate researchers will be interviewing Gulf fisherman about what they’ve witnessed in fishing for greater amberjack. Joining them in this task will be Dr. Marcus Drymon, an assistant professor at Mississippi State University, who also worked at South and Sea Lab.

The University’s investment in marine science resulted in grants for the greater amberjack study. It remains a leader in Gulf research and the instruction of young marine scientists.

“It was perfect training for a career in fisheries and coastal management,” said Scyphers. “I’m a tremendous fan of South Alabama.”

Management of reef fish has been highly contentious in the southeastern United States, with fishermen arguing that species have been undercounted, resulting in too-short fishing seasons. The Great Red Snapper Count offered an estimate of 110 million fish, three times larger than previous estimates, which could result in more days of fishing.

Congressional support has been key for this type of research endeavor because the scale of the projects requires more funding than a typical grant competition would give. Congress is interested in resolving the apparent discrepancy between what their constituents are seeing on the water and what the formal stock assessments are showing.

The annual season for greater amberjack is 60 days. There are two periods, one in May-April and one in August-September.

The Greater Amberjack Research Project will take two or three years to complete. This summer, scientists will begin creating a comprehensive habitat map of the South Atlantic and Gulf of Mexico.

The greater amberjack, or Seriola dumerili, will be more difficult to count than the red snapper.

“Red snapper are a very well-studied species, but the greater amberjack is not,” Powers said. “We don’t know a lot about its migration and movements.”

“The underwater video works great from Alabama through Florida,” Powers said. “From Louisiana to Texas, the bottom 10 meters, you often can’t see anything, but the acoustics can penetrate that. You have to pair these technologies.

“There are also brand new technologies like eDNA — environmental DNA. Fish essentially defecate in the water, and they also get eaten, and these things leave traces in the water. So you can sample the water and figure out if a species has been there. That’s been done for a while with endangered species like sturgeon. What we’re trying to do is correlate the amount of eDNA with a density of fish.”

Research will help scientists decide which technologies are most promising for years to come. The end goal is maintaining a healthy and prosperous fishery for everyone, including those who make their living from the seafood industry along the Gulf Coast.

“What the fishermen want is increased catch levels and more days at sea,” Powers said. “That means more charter boat trips, more hotel stays, more gas, more bait. In coastal Alabama, as well as Louisiana and Florida, offshore fishing has a tremendous economic impact. It really makes or breaks some of these local economies.”