Andy Scott hadn’t even graduated from the University of South Alabama when he started his first graphic design business. Identity Signs. He worked from the back of his dad’s car lot in Mobile.

Even then, doing computer-generated signs and banners, he admired the old-fashioned craft of lettering by hand.

“It’s not perfect, you know?” said Scott, a 39-year-old artist, father and surfer. “You can tell it was done by a human being.”

After earning his fine arts degree from South in 2007, he worked at local sign companies. He became a print salesman. On weekends, he started doing custom sign painting.

Scott remembers going to the Spring Hill Barbershop and asking the owner if he could freshen up her signs.

“I had so much fun doing it – and I got paid for it,” he said. “I kept finding jobs that I wanted to do anyway. Greer’s Market was like that.” 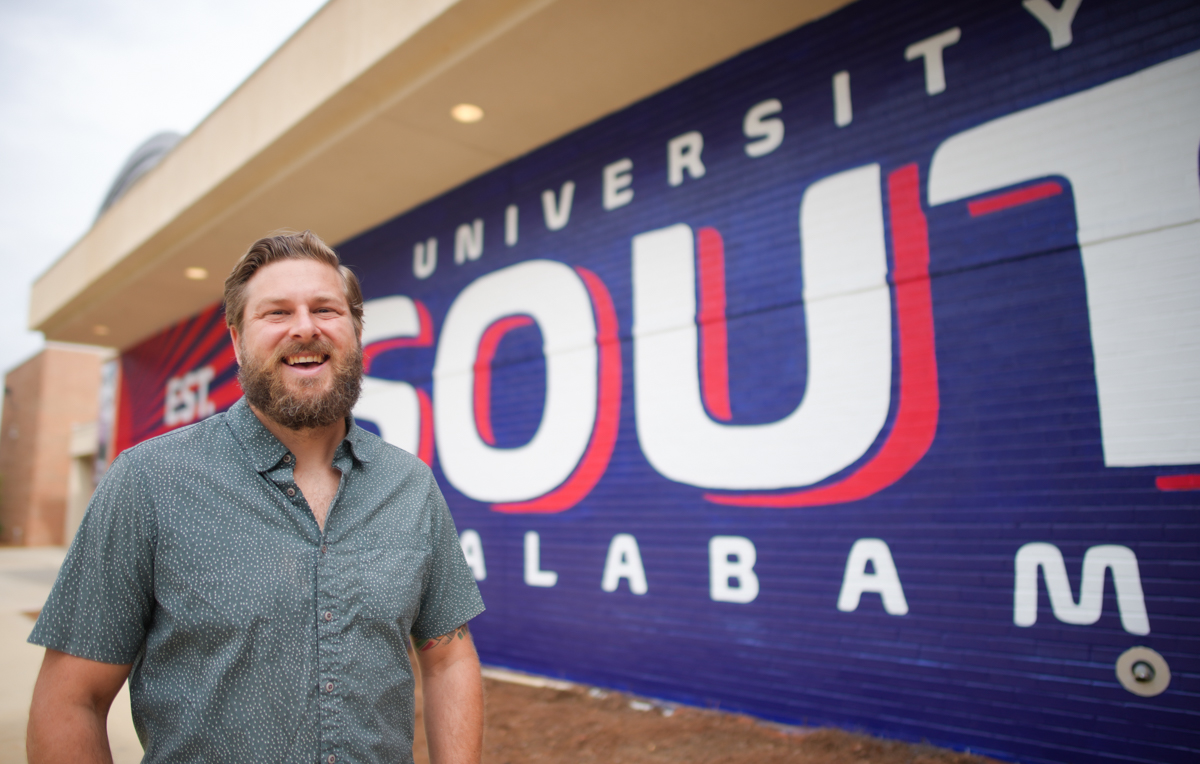 Muralist and University of South Alabama graduate Andy Scott's latest work is on the side of the USA Student Center — a bright mural in Pantone 281 and 193.

Three years ago, Scott started New Hand Signs. He opened a downtown workshop and wound up doing designs for neighbors such as Wheeler Lofts, the Innovation Portal and the Braided River Brewing Company. At the Old Familiar Tattoo Company, he traded custom signs for the colorful art on his arms.

On Dauphin Street, he does signs for restaurants and coffee shops. For the City of Mobile, he restores fading historical markers. For the Mobile Arts Council and Downtown Mobile Alliance, he did a four-story mural on the rear wall of the Athelstan Club.

Scott’s company has been featured in local newspapers and magazines. Business is brisk. He’s had to hire an assistant.

He recently returned to South with a commission for a mural outside the Student Center. It takes about a week to paint a wall that is 69 feet wide and 12 feet tall. The red-and-blue design features the Moulton Bell Tower and a bold rendering of “SOUTH.”

Diane Gibbs, an associate professor of art, isn’t surprised that Scott came back to campus as a Mobile muralist. She was his teacher and adviser. She remembers him as a quiet student, inventive artist and budding entrepreneur.

“It was hard to get him out of his shell, but he worked hard, started his own business, and he was always in a band,” Gibbs said. “He always loved signs and working with people. He always pushed himself, too.”

In January, for the Mobile Arts Council and Downtown Mobile Alliance, he did a four-story mural on the rear wall of the Athelstan Club. The design features giant ants and a drawing of E.O. Wilson, the legendary biologist and naturalist who spent some of his childhood in the countryside around Mobile. The whole thing took three weeks to complete.

“I’d never painted anything that big,” Scott said. “It was like, well, you caught the big fish, now you have to reel it in.”

“We started seeing his signs downtown and it was so different from the mass-produced stuff,” Stevens. “He’s so talented and he’s so great with people. He does what he says he’s going to do and he does it well.”

Art and Music in Mobile

Scott grew up in West Mobile. Art was his favorite subject at Murphy High School. He loved music.

His mother and grandmother were classic rock-and-roll fans. His great uncle was Ray Sawyer, lead singer for Dr. Hook, who sang lead on the band’s biggest hit, “The Cover of Rolling Stone.”

Scott played the drums for several punk rock bands in Mobile. He surfed whenever he could. He skateboarded to class and enjoyed his time in college.

Scott started dating his wife, Laura, at South. They have two children. She teaches art at Mary B. Austin Elementary School.

Most of the graphic artists in Mobile seem to know one another. They had the same classes and professors. They did the same jobs at the same companies.

“It’s a nice community,” Scott said. “A lot of the people went to South and I still work with them.”

His downtown studio is an old auto garage with a big ceiling fan to help beat the heat. There’s air-conditioning in the old Airstream-style trailer that serves as his office. The shop walls are lined with surfboards and old signs that say things like “Shrimp Boats A-Comin’ Here.”

One of his signs was autographed by Henry Nunn Jr., a sign painter from Mobile in the late 20th century. He tagged all of his work as “Dunn By Nunn.” Scott met his daughter, who gave him a picture of the man who had signs all over town.

The latest Mobile sign man studied vintage books to practice some of the basic techniques and finer points of sign painting by hand. One day an old man with a cigar stopped by his shop.

Most of his work is in Mobile, though he’s done signs in Pensacola, Florida, and Jackson, Mississippi. He’s got a restaurant job coming up in Tuscaloosa, Alabama.

There’s money to be made in custom designs and downtown murals, but Scott isn’t interested in becoming the sign king of the Gulf Coast.

“I’d need a team of people to do that kind of thing,” he said. “I’m very happy with the jobs I’m doing and the money I’m making. If I can keep that rolling, I’ll be happy.”

The print company Scott started as a student, Identity Signs, has been sold several times during the last 20 years. Yet it remains open for business. The latest owners have a store in Daphne on the Eastern Shore.

“That’s kind of crazy,” he said. “It’s still around, with the original logo.”

In coming years, when his signs fade and murals peel, Scott hopes he’ll be around to repaint them.