Are Plastics Getting Into Your Oysters?

Doctoral student Caitlin Wessel came to the University of South Alabama to study seagrass, but her life changed one day as she gathered seagrass samples along a beach in the Chandeleur Islands.

The remote and pristine barrier islands, part of the Breton National Wildlife Refuge, lie 50 miles east of New Orleans and 35 miles south of Gulfport, Miss., in the Gulf of Mexico. The federally protected islands, marshlands and waters are a paradise for fishermen and environmentalists.

Reachable only by boat, the Chandeleurs are also a classroom for University of South Alabama students like Wessel who study at the Dauphin Island Sea Lab, located on Dauphin Island, a populated barrier island near the entrance to Mobile Bay and 45 minutes from the University’s  main campus. 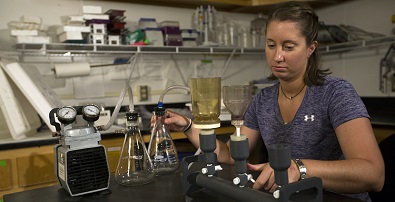 Caitlin Wessel, a South doctoral student, is studying how microplastics affect an oyster's growth rate, along with its respiration, feeding and filtration.

On that memorable day, Wessel and a fellow graduate student used specialized tools to punch into the sand, retrieving cores of seagrass for sample analysis. Repeatedly, both grew frustrated as plastic trash caught in their samples, slowing their task and sticking in Wessel’s mind. Why was so much trash in one of America’s most protected wildlife areas?

“It got me interested in whether or not these pristine locations that we think are unimpacted by humans are really unimpacted. So, I started doing a little background research on marine debris and these pristine locations,” Wessel said. “One thing led to another, and I stumbled upon microplastics, and fell in love with studying marine debris and went and told my advisor that I didn’t want to study seagrass.” With that decision, she became the only student in the University’s department of marine sciences to study the impact of microplastics.

In 2014, Wessel led what is believed to be the only study of microplastics ever done in the northern Gulf of Mexico. The result was “Abundance and Characteristics of Microplastics in Beach Sediments: Insights into Microplastic Accumulation in Northern Gulf of Mexico Estuaries,” published with Grant Lockridge, DISL marine biologist, who designed a system to separate microplastics from sediment samples; Dr. David Battiste, USA assistant professor of chemistry; and Dr. Just Cebrian, USA professor of marine sciences, who is Wessel’s advisor. The paper became available in the “Marine Pollution Bulletin” in June.

Using seven locations around Mobile Bay, Wessel broke each one into smaller areas, then collected samples from an area to the north, impacted by fresh water flowing from the Mobile-Tensaw Delta, and three others located near Dauphin Island, the Fort Morgan peninsula and the Eastern Shore, all impacted by the Gulf of Mexico’s tides and currents. The samples showed that the greatest concentration of microplastics was three to four times greater along the saltwater shorelines than in the freshwater areas.

But, what exactly are microplastics and where do they originate?

“Most of the microplastics that we have in the Gulf of Mexico, at least in our area, which I’ve found so far, are something called secondary microplastics, which occur when larger plastic items break down,” Wessel explained. “If you leave a plastic bottle on the beach, and it washes out into the water, the wave action from the currents and the wind, then the ultraviolet light from the sun are going to break that plastic bottle down into smaller and smaller pieces, and those pieces eventually become microplastics, which is a piece of plastic smaller than five millimeters.”

Wessel said plastics enter the water because some people are careless about leaving their beach trash and because fishermen often lose plastic equipment accidentally.

“Different types of fishermen, both commercial and recreational, use a lot of different kinds of plastic as their gear so you have fishing line, you have fishing nets, you have floats, lures, buoys, cages and nets. All these different products are frequently made out of plastic because plastic is very durable, and it’s also very cheap,” Wessel said. “If you’ve ever been fishing, you know when you cast your line out, if you get it caught on something, and you pull and pull and pull, hopefully, it comes loose, but if it doesn’t come loose, then it breaks and you leave whatever broke off there.”

Imagine you’re fishing in Mobile Bay and, despite your best efforts, you lose the lid to your plastic cooler, then watch it float out of sight. Wessel says because of water currents, your lid is most likely headed to the Gulf of Mexico where it gets washed south along the Florida coastline, eventually entering the Atlantic Ocean. From there, the Gulf Stream grabs your plastic lid, shuttling it northward along the East Coast. All this time, that lid has broken into smaller and smaller pieces. Eventually those pieces end up in the North Atlantic Ocean. From there, odds are pretty good, the kajillion pieces of microplastics from your cooler lid may ride ocean currents back south to an East Coast beach, or maybe even back into the Gulf of Mexico.

According to Wessel, that’s exactly why her recent study showed greater microplastic concentrations along saltwater shorelines.

Walk along any shoreline in the world, and you’re likely to see microplastics with the naked eye, but Wessel said besides what you can see, there are growing concerns about the microplastics that are so small, they are getting into the food chain.

“Organisms that are filtering large volumes of water when they eat – oysters, mussels and clams – also get microplastics. Once the microplastics get inside them, they can either get excreted through their normal digestive processes, or they can end up in the digestive system somewhere, and in a couple of cases, they’ve even found where the smallest microplastics have moved into the bloodstream,” Wessel explained. “Then, when larger predators come along and feed on them, they have the chance to work their way up the food chain to larger items like fish, tuna and sharks.”

So, what does that mean for the seafood consumer?

The consumption of microplastics by oysters is the focus of Wessel’s current research project.

“We have a bunch of different aquariums set up with oysters in them, and we have these machines that feed the oysters every hour, so as we’re feeding them we mix microplastics at different concentrations and different types of plastic in with their food so that every hour when they eat their food, they’re also consuming microplastics,” Wessel explained. “We’ll be tracking that through the end of this year just to see how the microplastics that they are ingesting are affecting their growth rate, their respiration and their feeding and filtration.”

Recently, the United States instituted a ban on microplastics that come from personal care products. Beginning in 2018, companies will no longer be able to put microscopic microplastic beads into toothpaste or other products, such as facial scrubs.

So far, Wessel has completed her oral and written comps for her doctorate. In September, she will collect more research samples aboard a National Marine Fisheries vessel along the Gulf of Mexico shelf, the offshore area where water is less than 1,000 feet deep.

“I’ll be sampling both surface waters and then deeper water to look for microplastics and get an idea of the lines of concentration we’re looking at out in the open water of the Gulf,” she said.

After Wessel completes her dissertation in about a year, she hopes to teach and to continue her research into the impact of microplastics on the Gulf, its seafood industry and the people who depend on it for their food and livelihood.

The Pennsylvania native admits she “got really lucky” coming to the University of South Alabama to study because it fulfilled a childhood dream that began during family vacations at Sea World of Ohio, where she first saw dolphins.

“That helped to launch me into the world of marine science, which is really a small world,” Wessel said. “I got really lucky coming to the University of South Alabama because my professors have been really supportive, both the professors I have actually taken classes with and also professors in other departments, especially the chemistry department,” she said. “Also, one of the greatest things about the marine science department at South is their collaboration with the DISL, and because of this collaboration, I’m able to live on Dauphin Island and to do most of my work on Dauphin Island. I wake up in the morning, and I watch the sun rise over the eastern end of the island, and I watch the sun set over the western end of the island. I’m very fortunate to be at such a beautiful location to do my work.”