North Alabama Freshman Selected as USA Board of Trustees Scholar 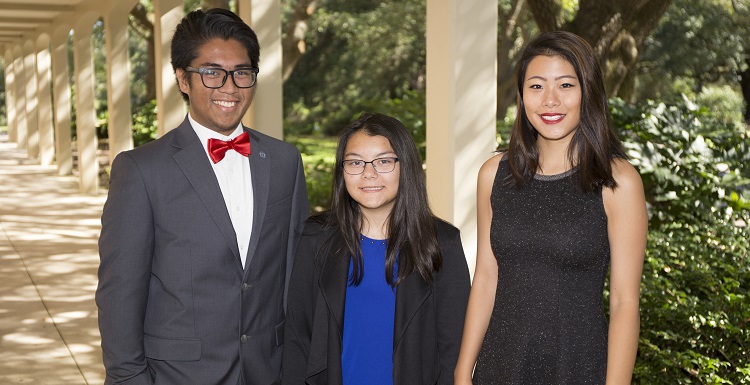 This year's University of South Alabama Board of Trustees Scholar, Ada Chaeli van der Zijp-Tan of Madison, Ala., is flanked by 2016 recipient Christian Manganti of Gulfport, Miss., and 2015 awardee Shirley Zhang of Vestavia Hills, Ala. The USA Board of Trustees Scholarship program recognizes the most academically talented student in each incoming freshman class.

University of South Alabama freshman Ada Chaeli van der Zijp-Tan, who graduated from high school with a 5.16 weighted GPA, has been named the USA Board of Trustees Scholar for the 2017-2018 academic year.  The announcement was made at the University’s board of trustees meeting on Sept. 8.

A graduate of Bob Jones High School in Madison, Ala., van der Zijp-Tan – who goes by Ada – registered a 34 composite ACT score, which is in the top one percent of all ACT test takers. She is majoring in biomedical sciences with an eye on becoming a physician.

“I was very impressed with USA when I visited the campus in 2013 in my freshman high school year. I also knew that I wanted to become a physician since I was in middle school and that I wanted to attend an in-state university,” van der Zijp-Tan said.  “I chose USA from among other colleges because USA offers a quality medical graduate school program as well as a variety of undergrad programs.”

Among the programs she is in are the USA College of Medicine Early Acceptance Program, the Freshman Leadership Scholars and the Honors College. “USA offered many opportunities to me with all three programs, lots of scholarships and a very nurturing learning community,” van der Zijp-Tan said. “When I received the news that I was chosen to receive this scholarship, I was overjoyed. I feel very honored to be recognized for my hard work as this year's recipient of the USA Board of Trustees scholarship.”

In high school, van der Zijp-Tan (Zijp sounds like “Zipe”) was active with HOSA (the former Health Occupations Students of America), the Mu Alpha Theta Math Honor Society and the National Honor Society.  At USA, in addition to the Board of Trustees Scholarship, she has received a Presidential Scholarship, Freshman Leadership Scholarship and Crampton Harris Trust Scholarship.

Regarding her distinctive last name, van der Zijp-Tan’s parents are both first-generation immigrants, now living in Madison. Her father is from the Netherlands and her mother is Chinese from the Philippines. “In Dutch, ‘van der’ means ‘of the,’ so therefore my last name means that I am of the ‘Zijp’ and ‘Tan’ families,” she explained.