On Track For Success 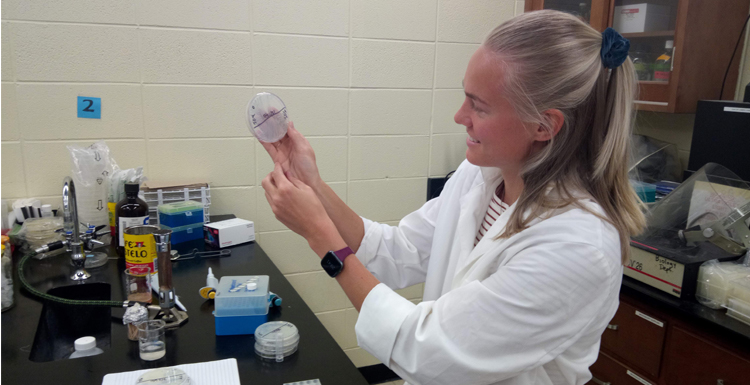 Emilie Berge, in her lab at South, has received one of just 12 Zymo Research Impact Initiative grants awarded annually for scientific innovation and potential social impact. Berge received her master's degree in environmental toxicology in May will use the $4000 award to perform transcriptomic analysis of the polyaromatic hydrocarbon degrading bacteria she described in her thesis.

The first time Emilie Berge heard of the University of South Alabama, was when she received a Facebook text message out of the blue from an assistant track coach inviting her to apply to the University and join the team. Berge was an accomplished track and field athlete in Norway and after numerous conversations over several weeks with Jags head coach Paul Brueske, she accepted the offer.

“Initially I was very scared. I did not know anybody, and I struggled with speaking English, Berge said. “But as time went by, I fell in love with the school and the track program and felt as I had found a second home.”

She enjoyed an outstanding athletic career at South and holds the school and Sun Belt Conference records in the heptathlon, a competition consisting of seven separate track and field events. Berge also excelled in the classroom, receiving her bachelor’s degree in biology. In May, she completed her master's degree in environmental toxicology, a field of science that studies the effects of biological, physical, and chemical hazards on living organisms.

In August, she received just one of 12 Zymo Research Impact Initiative grants given annually for scientific innovation and potential social impact. The $4,000 award will allow Berge to perform analysis of the hydrocarbon degrading bacteria she described in her master’s thesis.

Berge credits her athletic background with acquiring the necessary discipline to handle the rigors of academia.

“I learned that success is not given but something that needs to be earned,” she said. “Being a student-athlete also taught me how to manage my time efficiently.”

Berge credits her mentor, Dr. Sinead Ni Chadhain for guiding her through the rigorous process of completing her thesis.

“She's smart and curious and coupled that to a fantastic work ethic and attention to detail,” said Ni Chadhain, an associate professor of biology. “She had several setbacks during her thesis, but she never got discouraged. She just sat down with her data each time and figured out a solution.”

“I think a big reason why I was able to adjust and find my place was thanks to the track and field team at the University of South Alabama,” she said. “It gave me friends for life not to mention the man of my dreams. While I have moved, I will forever be a grateful and loyal Jaguar supporter.”