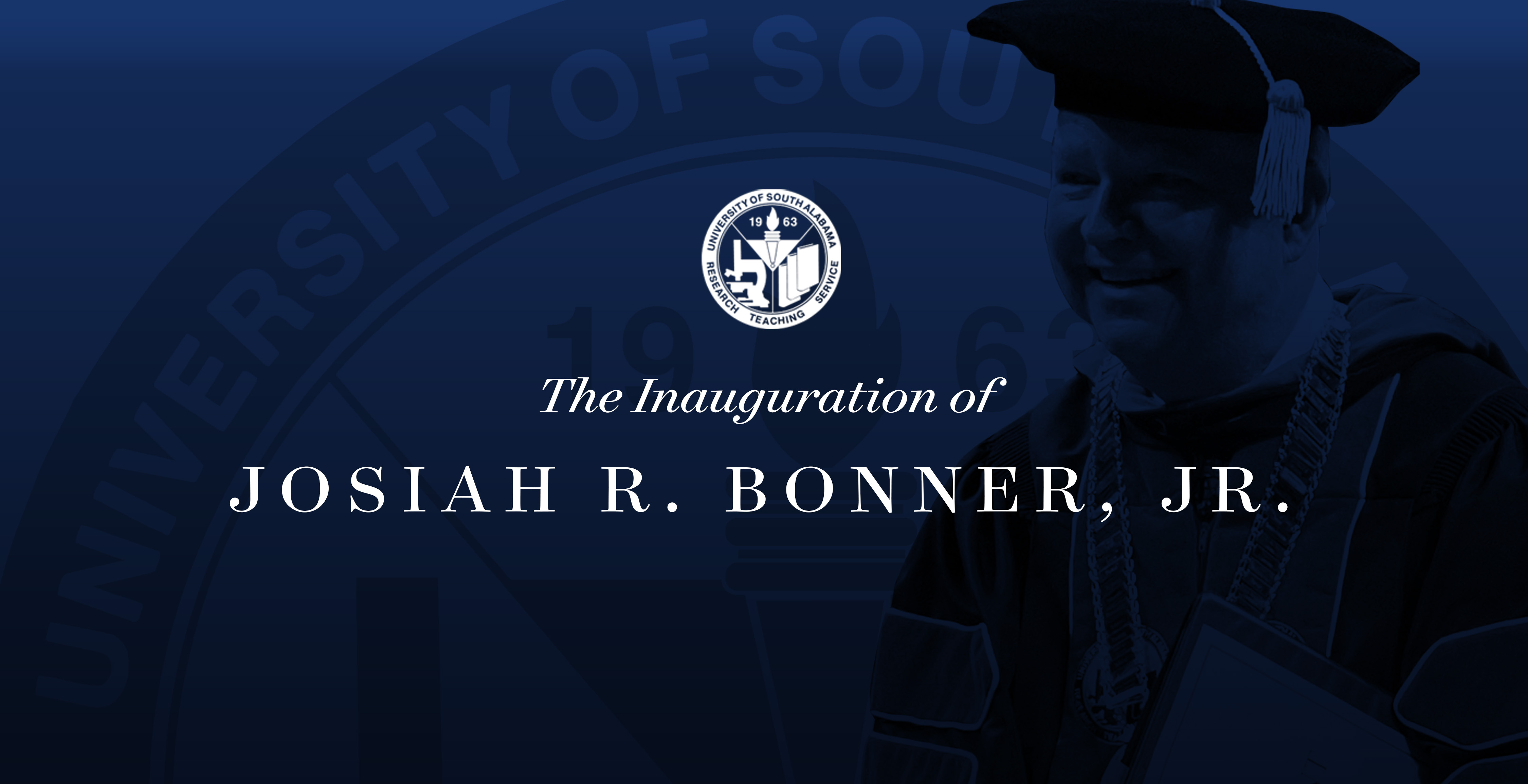 President Jo Bonner will be inaugurated as the University of South Alabama’s fourth president on Friday, Sept. 23, at the USA Mitchell Center. The public is invited to the 3 p.m. ceremony, which will be followed by an opportunity to meet with the president and his family on the arena floor.

“This is an exciting time for our institution, as we celebrate our achievements and look forward to what we can accomplish. There is truly no better time to be part of the South Alabama family,” said Dr. Andi Kent, provost and executive vice president, and co-chair of the Presidential Inauguration Committee. “We invite the University community and friends to join us for this historic occasion.”

During the inauguration week, there will be events including food drives, beautification efforts, a student showcase and social, an employee and retiree picnic, and Java with Jo with employees at designated USA Health locations.

On Thursday, Sept. 22, the University will host the Silver Endowed Presidential Lectureship at the Mitchell Center featuring Captain D. Michael Abrashoff, author of the New York Times best seller “It’s Your Ship.” The event is free and open to the public; tickets can be reserved online.

The installation website contains details regarding the dates and times of the events listed above, and will continue to be updated. 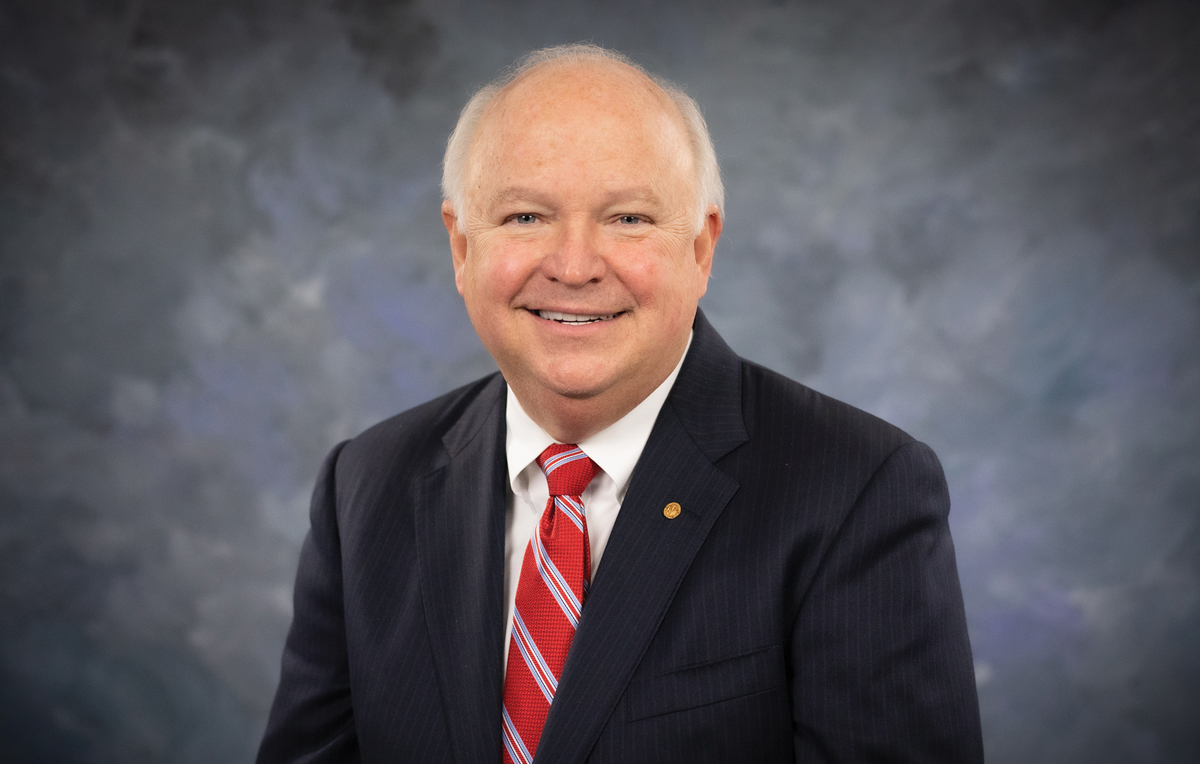 Jo Bonner, the fourth president of the University of South Alabama, will be inaugurated Sept. 23 at the USA Mitchell Center.

Jo Bonner is the fourth president of the University of South Alabama.

Previously, he served as chief of staff to Alabama Governor Kay Ivey. He joined the Ivey Administration in December 2018, as the governor’s senior advisor. Before joining the governor's office, he served as vice chancellor for economic development at the University of Alabama System from 2013 to 2018. During his final year at the UA System, he was an executive on loan, serving as interim executive director of the Tuscaloosa County Industrial Development Authority.

For more than a decade, he represented Alabama’s First District in the U.S. House of Representatives. He was first elected to the 108th Congress in November 2002 and was reelected to five additional terms. As a student at the University of Alabama, he worked on Capitol Hill as an intern for Congressman Jack Edwards. After graduation, he returned to Washington as press secretary and later chief of staff to Congressman Sonny Callahan.

In Congress, he earned a reputation as a respected and influential voice of reason in both Alabama and Washington. He was a member of the House Appropriations Committee, where he served on three key subcommittees, as well as the House Ethics Committee. Widely respected on both sides of the aisle, he was selected by House Speaker John Boehner to serve as chairman of Ethics during the 112th Congress. His crowning Congressional accomplishment came in 2012 when Airbus announced plans to build their first U.S. Final Assembly Line in Mobile. Over the years, Congressman Bonner developed friendships and strategic partnerships with the top corporate leaders at Airbus, one of the world’s largest aerospace and defense companies. The Airbus project has resulted in more than $1 billion being invested in Alabama, creating thousands of new jobs in the aerospace industry and putting Mobile on track to become the fourth largest commercial aviation city in the world.

President Bonner has received numerous awards and honors, including a 2020 induction into the Alabama Academy of Honor; the Academy is the state’s premiere recognition of 100 living Alabamians for their outstanding accomplishments and service. In 2016, the Business Council of Alabama created the inaugural “Congressman Jo Bonner Spirit of Leadership Award” and honored Bonner as its first recipient. In 2013, he received the Distinguished Public Service Award, the highest honor the U.S. Navy bestows on a civilian. He also received the 2012 “Governor Bob Riley Building a Better Alabama Award” by the BCA.

Bonner earned a B.A. degree in Journalism from The University of Alabama in 1982. He is married to the former Janée Lambert, of Mobile; they are the parents of a daughter, Lee, and a son, Robins.