University Board of Trustees Scholar Named 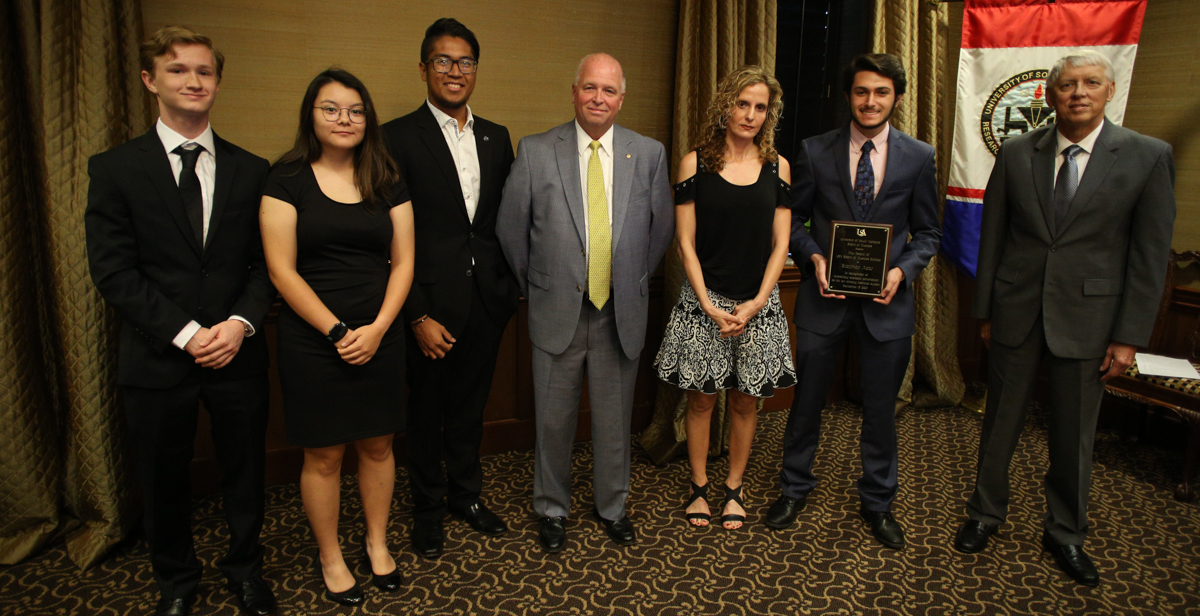 Stephen Azar, second from right, is the University of South Alabama Board of Trustees Scholar for the 2019-2020 academic year. Azar is a freshman from St. Patrick High School in Biloxi, Miss. The scholarship is awarded annually to the most academically talented student in each incoming freshman class at USA. Joining Azar at the USA Board of Trustees meeting are, from left, 2018 scholar Cody Dunlap of Mobile, 2017 recipient Ada Chaeli van der Zijp-Tan of Madison, Ala., 2016 recipient Christian Manganti of Gulfport, Miss., Board of Trustees chair pro tempore Jimmy Shumock; Rana Azar, Stephen Azar's mother; Azar, and University President Tony Waldrop.

Stephen Azar’s dad is a doctor. Stephen’s oldest brother is in medical school. Stephen wants to be a doctor, too. His first stop on the way to his medical degree will be at the University of South Alabama.

Azar today was named the USA Board of Trustees Scholar for the 2019-2020 academic year. The scholarship is awarded each fall to the most academically talented student in each incoming freshman class, based on ACT/SAT score and, if needed, GPA, followed by rigor of high school coursework.

Azar scored a perfect 36 on his ACT composite, an accomplishment reached by only 0.2 percent of the nearly two million high school students who take the national exam. He also achieved a 4.3 weighted grade-point average at St. Patrick Catholic High School in Biloxi, Miss.

He’ll major in biology at South. “I selected biology as my major primarily because my oldest brother, who is currently a second-year medical student, majored in biology as an undergraduate,” Azar said. “He told me that doing so prepared him well for the foundational courses in medical school. I also hope to matriculate into medical school and become a physician.” At the moment, he is interested in entering the field of neurology or neurosurgery.

With his academic credentials, Azar had many attractive options for launching his college education, but South offered a strong foundation. “I chose South Alabama because it offers a fantastic preparatory route to medical school. Additionally, acceptance into the EAP program served as a compelling reason.”

A member of the National Honor Society at St. Patrick, Azar was active in numerous clubs and organizations, including the Key Club, Mock Trial team, Student Council, Quiz Bowl team, Interact Club, swim team and as a St. Patrick Ambassador.

“Participating in those extracurricular activities helped me to improve various skills, such as effective cooperation and public speaking,” he said. “I do plan to participate in organizations such as AED (Alpha Epsilon Delta, a national health pre-professional honor society) and Circle K during my time at the University.”