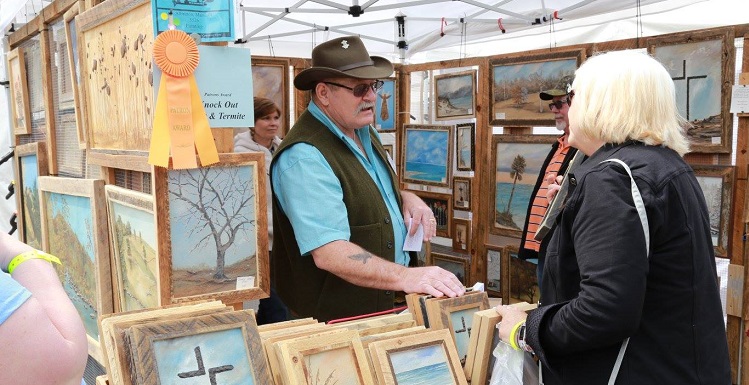 A Mitchell College of Business survey showed more than half of the people attending the Fairhope Arts and Crafts Festival patronized local businesses. Photo courtesy of the Eastern Shore Chamber of Commerce.

A business study of the Fairhope Arts and Crafts Festival – researched by a University of South Alabama professor, students and community volunteers – found that almost one-third of this year’s visitors came from outside Alabama.

The study also showed 69 percent of the attendees were from outside Fairhope, according to Dr. David Turnipseed, Mitchell College of Business professor of management, who supervised the research. He, students and volunteers from the Eastern Shore Chamber of Commerce, surveyed festival attendees for the study, which was done on behalf of the chamber.

“This event provides an upscale cultural experience, brings many new visitors to the area and pumps significant dollars to Fairhope, south Baldwin County and the region,” Turnipseed said. “For these areas, it brings new money, which is spent on hotels and other lodging, food, entertainment, fuel, arts and crafts, and general retail purchases. Plus, it adds to city, county and state tax coffers, which benefit the entire area.”

To gain information for the survey, Turnipseed and other participants approached individual attendees, concentrating primarily on the festival’s parking areas and food court.

Since the festival began in 1954, it has steadily grown to become one of the longest and best-known tourist attractions of its type in the Southeast. Next year’s festival is scheduled for March 17-19. The juried arts and craft show attracts more than 200 vendors from around the nation to display their wares in booths along downtown streets. Additionally, food and drink vendors round out the offerings.

Survey results showed 69 percent of attendees had attended the festival in prior years, and 96 percent of those surveyed said they plan to attend the next festival. Turnipseed said the survey also showed more than half of attendees this year said they patronized local restaurants as well as antique shops, book stores, local beaches and golf courses.

“Satisfied attendees are particularly valuable to this event because the survey revealed that 57 percent of all attendees and 46 percent of non-local attendees heard about it from family, friends, or word-of-mouth,” Turnipseed explained. “It’s likely attendees who are highly satisfied with the festival will encourage their family and friends to attend it in subsequent years, or to make the Fairhope area a vacation destination independent of this festival.”