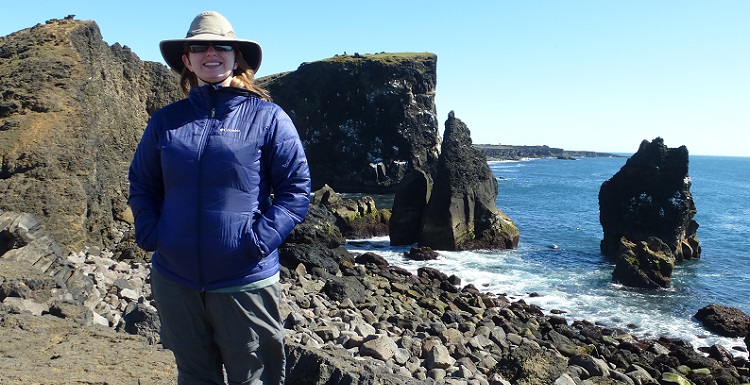 Dr. Carol Sawyer’s expertise is the study of land forms, specifically their processes and how they were formed. Recently, her research led to Iceland, a country geologically and volcanically active.

In July, Sawyer spent 10 days traveling across the Nordic island country, one of Europe’s most sparsely populated, obtaining a variety of geological information with specific attention on Iceland’s development and use of geothermalogy. She was one of 23 teachers and professors selected for the National Council for Geographic Education’s GeoCamp Iceland Institute, a short course in geographic inquiry and field methods.

“As part of my research agenda, I’m investigating the distribution and occurrence of cold environment landforms on a volcanically active island,” Sawyer said. “All the materials created from the Institute will be available through a database to share with teachers worldwide, but especially in Iceland and the United States.”

Located in the northern Atlantic Ocean, Iceland sits on the Mid-Atlantic Ridge, which is a divergent tectonic plate, or constructive plate boundary, located along the ocean floor. It is part of the longest mountain range in the world, and it moves as much as .92 inches per year. Most Americans became aware of how active Icelandic volcanoes are in 2012 when ash from an eruption shut down airports across Europe.

For Sawyer, an associate professor of earth sciences, the trip provided initial research into a multi-year project examining various aspects of cold environment land forms, including how their inhabitants live. Inside her South Alabama classroom, she teaches about natural hazards, the geography of Europe, introduction to atmospheric processes, landscape processes and national parks and conservation.

Traveling from the capital city of Reykjavik, she visited the country’s coastline and its interior, which consists of a plateau highlighted by sand and lava fields as well as mountains and glaciers, many of them flowing to the ocean through the lowlands. As part of her research, she will look at how the land developed, where its warm spots are and “try to understand the natural hazards and how the residents live with them.”

She learned that the Icelandic people are generally hardy and self-sustaining despite winter temperatures that often drop to barely above zero.

“The Icelandic people don’t seem to be threatened by volcanic eruptions, although there are live volcanoes all around them. I want to understand what they perceive as a threat and what is worrisome to them,” Sawyer said. “The people are very aware of climate change, and they believe in it. They have no interest in drilling for oil or natural gas because they have so much electricity between the geothermal and the hydroelectric applications from the environment.”

The group met with multiple employees of the government, including the Department of Civil Protection and Emergency Management, and Landsvirkjun, the national power company of Iceland. They toured a geothermal power plant, visited Thingvellir National Park, Reykjanes UNESCO Global Geopark, the Westman Islands and the Solheimajokull Glacier.

Sawyer noted that an increasing number of Americans are visiting Iceland as the result of an economic slump, “and marketing the country as a tourist destination was Iceland’s way of recouping from it.”

She will also be modifying some of her classroom lectures to share what she saw and new ideas that apply to her classroom curriculum.

“I will be making more trips there for my research,” Sawyer said. “And, I hope to be making them at different times of the year.” In Reykjavik, the average July high temperature is 56 degrees, but in January the average high drops to 35. The lowest temperature on record is 39 degrees below zero.