South Part of 'Cultural Shift' in Responsibility to Sustainability 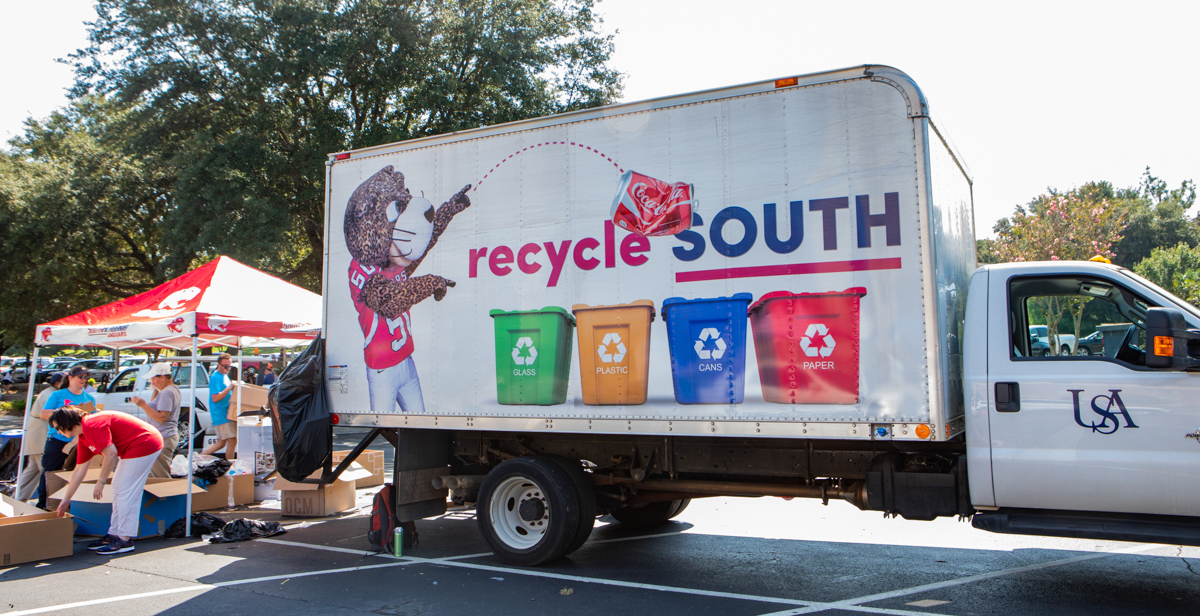 The University collected 7,350 pounds of cardboard during Move-In Day from students moving into residence halls.

When more than a thousand freshmen moved into the University of South Alabama residence halls last month on Move-in Day, they brought with them more than just clothes, books and food.

Think of all the cardboard boxes they used to carry those things into their new homes. And after they unpacked and put everything away, what happened to those cardboard boxes?

Well, student volunteers and University employees took the boxes to be recycled right on campus. How many boxes? Try 7,350 pounds of boxes. That’s right, more than three TONS of cardboard to be recycled and reused.

Madeleine Boudreaux, a pre-med student majoring in biology, is one of the students actively involved with sustainability at South. Originally from Theodore, Boudreaux started recycling as an undergraduate in Texas, where recycling programs were readily available.

“These programs empowered me to actively do my part to mitigate the climate crisis in my own small way, and the rewarding feelings that came with starting those small habits encouraged me to seek other ways of reducing my personal impact,” Boudreaux said. “I also think there’s a slow but steady cultural shift happening, where actively doing your part to care for our planet is becoming an expectation. This is largely due to people being better informed about how their daily activities can harm the environment.”

Dr. James Bridgeforth, the director of University Housing, is the sustainability committee’s chair. “Our primary mission has been to increase the availability of recycling options on campus,” Bridgeforth said. “The committee strives to promote environmental stewardship and engage students, faculty and staff to enhance knowledge of sustainability.”

While the amount of recycled cardboard is impressive, much more than that is recycled at South. Here’s a representative list of items taken to the University Recycling Center in roughly the last 12 months:

Since January, USA has accepted more than 850,000 pounds of cardboard, paper, plastic, aluminum and steel for recycling. That’s the equivalent weight of 245 midsize cars.

“There are many reasons that recycling has improved on campus,” Bridgeforth said, pointing out that many faculty and staff volunteer to engage in various sustainability initiatives on campus and in the community.

“The students are very passionate about sustainability and they have a deep desire to recycle and protect the environment. They are the true energy behind the movement,” Bridgeforth added. “From the very beginning, students participated in the recycling efforts at a very high level. In fact, it was our fraternities and sororities who led this movement at the start. Their efforts led to South Alabama being recognized as a leader in campus recycling for plastic bottles.”

The University Recycling Center is designed only for items to be recycled that are generated as part of the daily operations on campus. As part of that initiative, campus cleanup days are held periodically throughout the academic year. The next campus cleanup is scheduled for Saturday, Oct. 19, with a tentative time from 9-11 a.m. The cleanup will focus around the residence halls and the wetlands between USA North Drive and Aubrey Green Drive. Volunteers should assemble at the entrance of the Glenn Sebastian Nature Trail on Aubrey Green Drive.