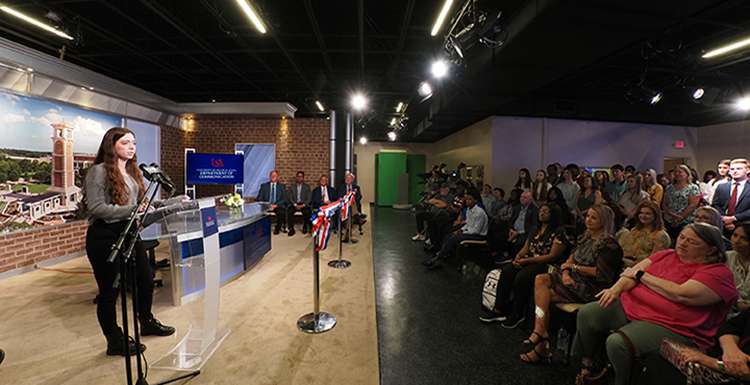 Morgan Brobston, a communication student at the University of South Alabama and manager of JagTV, gives a speech at a recent ribbon cutting ceremony for South’s newly renovated television production studio.

Communication students at the University of South Alabama now have access to a newly renovated television production studio where they can practice everything from anchoring to operating cameras to fine tuning studio lighting. A ribbon cutting ceremony for the studio, which includes a set donated by WKRG News 5, was held Sept. 27, 2022.

“This new set means so much to the department and our students,” said Dr. Steve Rockwell, associate professor of digital film and television and director of JagTV. “I witnessed student enthusiasm and energy increase as the set came together over the past few months. Students are very excited to have this space to create their content.”

New additions include an anchor desk, two monitors, lights and a talk show set. Several pieces come from WKRG’s old news set that aired for many years. Over the summer, the set was moved to South’s campus and installed in the television production studio (Room 172) in the Science Laboratory Building.

“Special thanks to WRKG for their generosity and continued partnership,” Rockwell said. “I also want to thank the University’s renovations team. They are true craftsmen. This set will have a tremendous impact in educating our students in TV production and broadcast news.”

WKRG and their parent company, Nexstar Media Inc., continue to be generous partners and supporters of the University. They have provided internships and hired several broadcast journalism and meteorology students over the years.

According to the U.S. Bureau of Labor Statistics, communication and media occupations are projected to grow 14 percent by 2030 resulting in 151,000 new jobs. Effective communication is necessary in all industries to build and maintain relationships and to convey information to diverse audiences.