South Grad's 'Got What it Takes' in Hollywood Film Industry 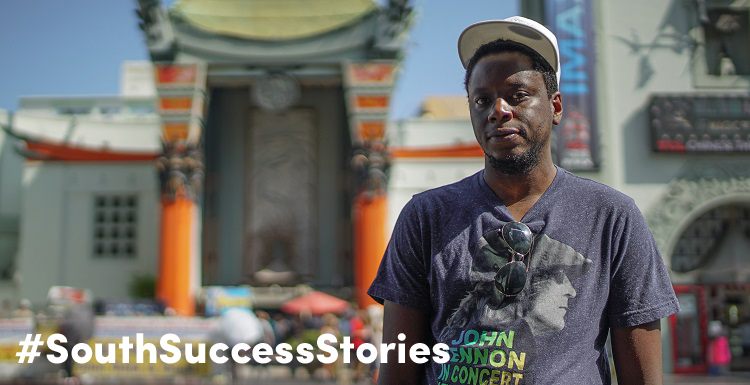 Tinashe Nyatanga, '12, bought a one-way ticket to Los Angeles after graduation to break into the film industry. Nyatanga, here in front of Grauman's Chinese Theatre just a few blocks from his home, is honing his craft with the hopes of directing full-length movies.

There’s a fish-out-of-water scene in “Beverly Hills Cop” when Eddie Murphy’s character, Axel Foley, drives his faded blue Chevy Nova down Rodeo Drive and looks on in amusement as he passes high-end shops, towering palm trees and the beaux monde.

Tinashe Nyatanga knows the scene well and played it over in his mind countless times since he was a child, the son of a Zimbabwean diplomat, who eventually found his way to the University of South Alabama and now works in the film industry in the very city he fantasized about.

“It was pretty much the only movie my family had at the time when I lived in Algeria that had a black hero, and it’s something I looked up to because I identified with the character on the screen,” Nyatanga said. “It was almost an inspiration seeing Eddie Murphy and just being like, ‘Hey, he looks like me.’ So it played a big role in really wanting me to follow the path into the industry. I would even ask my dad to laugh like Eddie Murphy did in the movie.”

“It was almost an inspiration seeing Eddie Murphy and just being like, ‘Hey, he looks like me.’ I would even ask my dad to laugh like Eddie Murphy did in the movie.”

Since graduating with a communication degree in 2012, Nyatanga’s work and dues paying has landed him editing jobs with major record labels, working as a production assistant on a Rihanna video and serving as a body double for will.i.am. (On the latter, the video got scrapped. “But I still got paid, so I’m not too mad,” Nyatanga said.)

P.A. work has led to editing work that has led to directing work, and now Nyatanga has hooked up with Guerilla Hollywood and Executive Producer Michael Mihail, whose credits including directing videos for Kendrick Lamar, Seal and the Alabama-born Yelawolf .

But before that, Nyatanga was at South, and before that he was all over the world. As a diplomat’s son, Nyatanga actually spent little time in Zimbabwe. He attended an American school in Algeria, a British school in Belgium and an Indian school in Iran.

He began to find his direction in watching cartoons, “Beverly Hills Cop” and MTV, and somehow knew that’s what he wanted to do, even if he didn’t know exactly what that was. He’d stay up into the early hours of the morning making videos using crude software.

He followed his sister to the University of South Alabama, where she was studying biology, and immersed himself in video production, serving as general manager of JagTV and creating videos for South’s website and the Mitchell Center. “If you went to the games at that time and looked at the video screen, that was me in some capacity,” he said.

One day, as graduation approached, Nyatanga was sitting in his apartment when a Yelawolf video came on his TV. “The production value on it just blew me away,” Nyatanga said.

He found the email of the director through a Google search and shot Mihail a note with the subject: “Employment or Volunteer Positions Inquiry.”

While it would be another year before Mihail and Nyatanga would meet up, he bought a one-way ticket to Los Angeles and began to work in the film industry. The two kept in touch and eventually had breakfast together. There, Mihail asked Nyatanga if he wanted to intern on a Kendrick Lamar video. Nyatanga jumped at the chance.

Mihail described Nyatanga as his protégé. Nyatanga said Mihail has introduced him as his “young Jedi.”  Beyond being technically versed in editing software, Nyatanga has a great eye and the ability, as Mihail put it, to separate art from disposable content.

“I’ve seen directors and filmmakers come and go — one week you’re hot and the next you’re forgotten,” Mihail said. “It takes a lot of patience and creativity to say ‘no’ to something, or to fight for what you believe in creatively and not compromise your art, and I think he gets that. He’s shown me job after job and year after year that he’s got what it takes to stick it out and hang with the big guys.”

“I’ve seen directors and filmmakers come and go — one week you’re hot and the next you’re forgotten. He’s shown me job after job and year after year that he’s got what it takes to stick it out and hang with the big guys.”

And at the same time, not forget where he began to learn his craft. Dr. Richard Ward, USA professor of communication, said Nyatanga still stays in touch, and in the last year spoke in a video call to one of Ward’s production classes. The most important lesson for the students, Ward said, was that Nyatanga’s story shows a path from school to the film industry, and “he’s able to speak to them and really still seem like he’s one of them, doesn’t seem like the stereotype of someone in Hollywood production.”

Nyatanga is young, but even at 30, he feels that his next steps will be critical in his trajectory. He said he wants to make decisions that will eventually put him directing movies. “I like to think of the extreme worst cases and extreme best cases when making a decision.”

The best outcome will land him in a director’s chair; the worst keeps him in the editing booth and puts his career on cruise control.

There’s a second scene in “Beverly Hills Cop” that has stuck with Nyatanga. Foley, the detective, goes into an office building to ask questions about his friend’s death. He gets shut down, though, and tossed out by henchmen through a plate glass window.