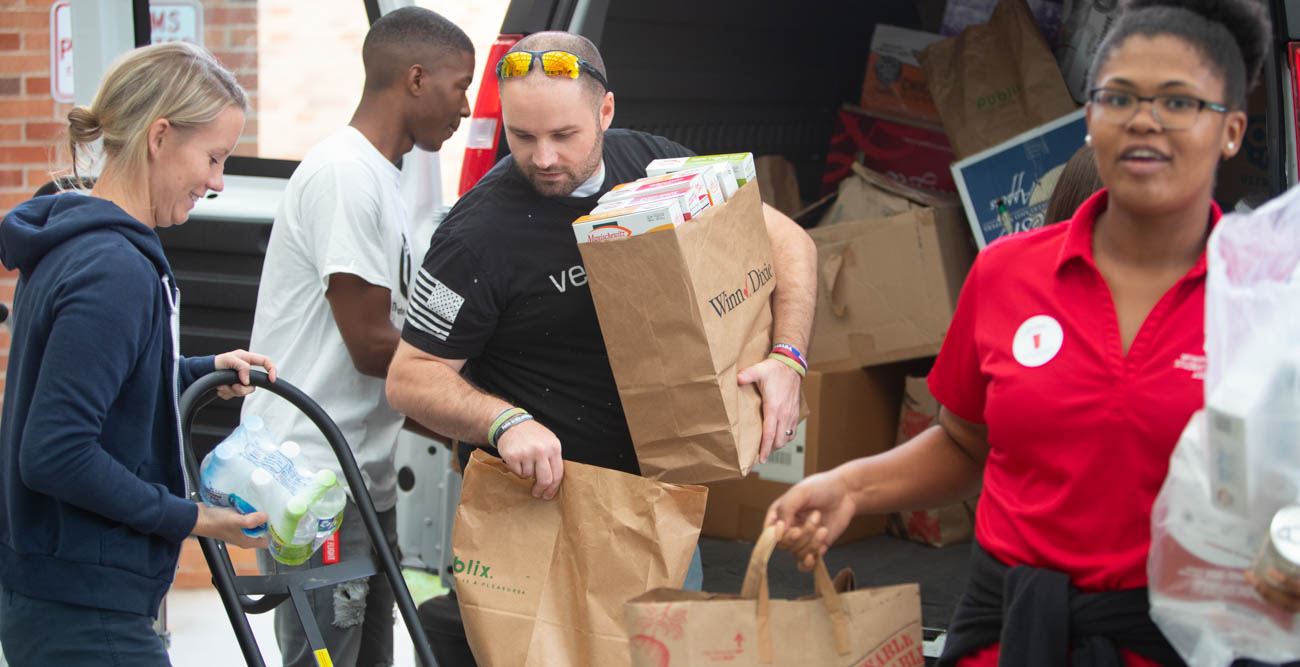 Student volunteers unload the largest donation ever for the Donor to Diner food pantry at South. The donations came from Ahavas Chesed Synagogue.

Donor to Diner, the food pantry that helps students in need at the University of South Alabama, on Wednesday received its largest donation since it opened almost one year ago.

Food donated by members of the Ahavas Chesed Synagogue in Mobile was collected during Yom Kippur, Sept. 18-19. Each year, the synagogue holds a food drive during their observance.

“A friend told me about the food pantry for students with food insecurity, and that led to us researching ‘food insecurity,’” Kathy Bronstein said as she watched USA students unload the synagogue’s donations from a large van. “So, this is something that educated us, and we are letting others know about food insecurity, too.”

The term food insecurity means an inconsistent access to food due to a limitation of resources. Before opening the pantry, Feeding the Gulf Coast and South’s Student Government Association conducted a study that suggested 57 percent of the student body is estimated to be affected by hunger at some point while they are in college. Nationally, about 48 percent of college students are affected by this issue, with it being more prevalent among students of color and first-generation students, according to the National Student Campaign Against Hunger and Homelessness. South is one of more than 300 schools across the nation that have set up food pantries for students.

“I know, as a professor, students who are insecure in their food are also going to have problems focusing on their studies,” said Dr. David Meola, a member of Ahavas Chesed Synagogue, the Bert and Fanny Meisler Assistant Professor of History and Jewish Studies and director of the Jewish and Holocaust Studies Program at South.

The donations included a wide variety of food such as canned meat, soups, beef stew and vegetables. Gulf South Distributing donated a van for the delivery.

“We are certainly appreciative of this donation,” said Dr. Michael Mitchell, vice president for student affairs and dean of students. “This food is going to go a long way on our campus.”