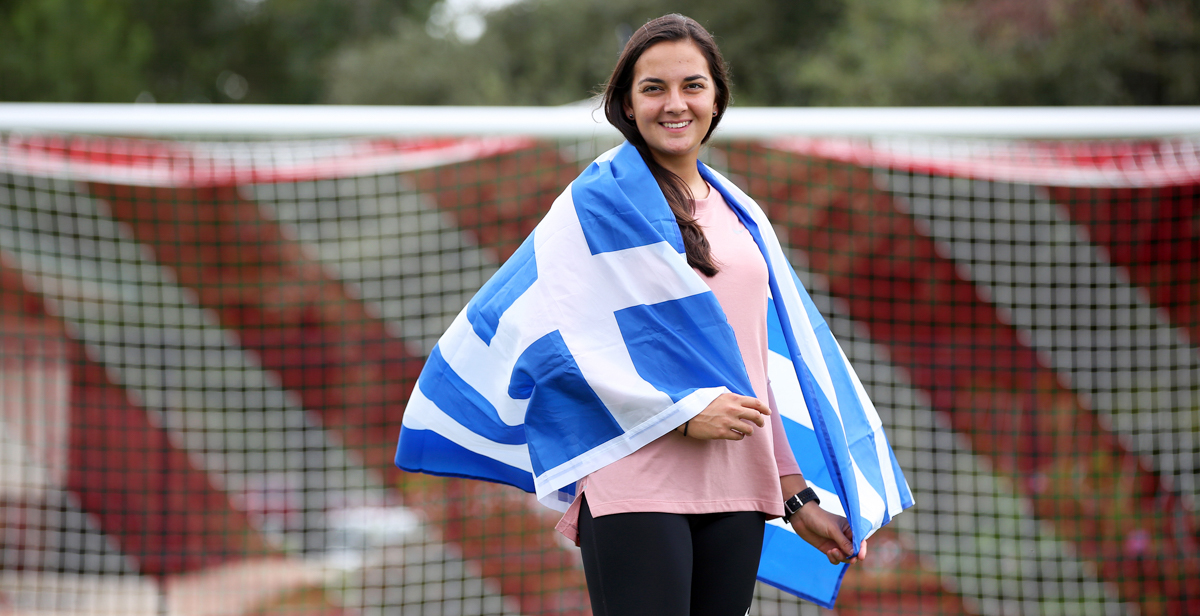 Athanasia Moraitou is a graduate student at South, where she is a midfielder on the soccer team. She also plays for the Hellenic Women’s National Team.

His mission: pick up midfielder Athanasia Moraitou from Hartsfield-Jackson Atlanta International Airport and deliver her to Statesboro, Ga., where she would meet up with her team. Well, one of her teams.

Such are the logistical considerations faced when you recruit a student-athlete who also takes the field for the Hellenic Women’s National Team.

Moraitou’s commitment to Greece means she had to miss the Jags’ recent win against Arkansas State, and she’ll be playing against Montenegro and Ireland during next month’s Sun Belt Conference Tournament.

But her contributions to the South Alabama team are undeniable. “Having played at the levels she’s played, she’s just really smart,” said Head Coach Richard Moodie. “We knew recruiting her we’d be supporting this.”

Moraitou started in South’s first 12 games before leaving to play in the Oct. 8 Greece-Germany matchup. Up to then, she had seven points on a goal and five assists, and added another assist within 10 minutes of taking the field last week against Georgia Southern. Her maturity and experience also shows in the locker room, Moodie said, with Moraitou on track to being a team captain next year.

For Moraitou, soccer and life actually began in Germany. Born to a Greek national and a German mother whose family emigrated from Greece, Moraitou was raised outside of Stuttgart. While home may be Germany, Moraitou identifies as a Greek. Her name, upbringing and the music she listens to are Greek, even if her accent happens to be German.

So at 6 years old, Moraitou made a deal with her mother. Young Athanasia would play the flute, and in return, she would also get to play soccer. That lasted two weeks before her flute teacher handed down an edict.

“She said, ‘You have to stop soccer, because you’re really bad (at flute),’” Moraitou said. She put down the flute; soccer stayed.

Without an organized girls team in the area, her parents sought permission for her to play with the boys, which she did until age 14.

At 15, Moraitou played for the junior national team for Germany. Then came the call from Greece. She accepted the invite and eventually moved up to its senior team, playing in 2017 and 2019 qualifiers for the Women’s Championship and World Cup.

She still gets goosebumps when she takes the field to Greece’s national anthem. “It’s amazing,” she said, “to play for your country.”

At South, Moraitou is a graduate student who plans to pursue a Master’s in Business Administration. She earned her undergrad in Germany, where she also interned at automotive maker Daimler AG. She wants a corporate job after finishing South, but also wants to try to play professionally.

If that involves some traveling, she’s more than ready to get picked up at the airport.