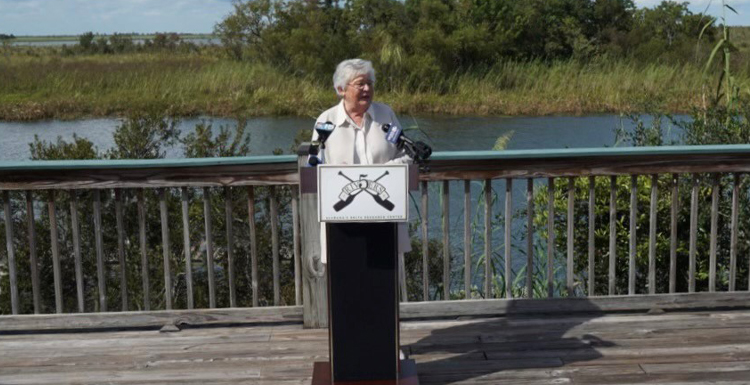 Alabama Governor Kay Ivey announces at an October 15, 2021 press conference that $41 million dollars from Gulf of Mexico Energy Security Act of 2006 will fund 17 separate projects around the State. South’s project, the Healthy Ocean Initiative, will receive $2,018,880 of that total.

The University of South Alabama’s new School of Marine and Environmental Sciences recently received more than a $2 million boost from the State and the Alabama Department of Conservation and Natural Resources.

In an October 15, 2021, news conference, Governor Kay Ivey announced that $41 million dollars will fund 17 separate projects around the State. This funding is provided by the Gulf of Mexico Energy Security Act of 2006 (GOMESA). South’s project, the Healthy Ocean Initiative, will receive $2,018,880 of that total.

“This funding will play a critical role in establishing the University of South Alabama’s new School of Marine and Environmental Sciences as a state and regional leader in addressing challenges facing the coast, while enhancing our ability to educate and train the next generation of environmental and marine scientists,” said USA Interim President John Smith. “Through this grant, Governor Kay Ivey and Commissioner Chris Blankenship are supporting coastal protection and fisheries conservation now and in the future.”

The Healthy Ocean Initiative is intended to be a one-stop program that the State of Alabama can rely upon to monitor important aspects of water and seafood quality in coastal Alabama.

The specific objectives are establishing a state-of-the-art environmental analytical facility to test for common and emerging contaminants in the coastal ocean and seafood; develop a rapid response team to investigate water quality threats; and during the three-year program startup, conduct surveys of seafood harvested in coastal Alabama to ensure that contaminants are at low levels in addition to sampling and mapping areas that may potentially have harmful algae blooms.

“The new School of Marine and Environmental Sciences is based on experiential learning and the new analytical equipment and oceanographic instrumentation that will be purchased with the funding will allow us to provide our students with an exceptional opportunity to excel in marine and environmental sciences,” said Dr. Sean Powers, chair of marine sciences at South and a senior marine scientist at the Dauphin Island Sea Lab.

GOMESA provides for the four Gulf Producing States and their eligible coastal political subdivisions (CPS) to share 37.5 percent of the qualified revenues from Outer Continental Shelf (OCS) oil and gas leases issued since December 20, 2006. With approval from the Governor's Office, the Alabama Department of Conservation and Natural Resources administers the funds.  Mobile and Baldwin Counties receive separate GOMESA disbursements directly from the Federal government.