Freshman Follows a Music and Engineering Path to Medicine 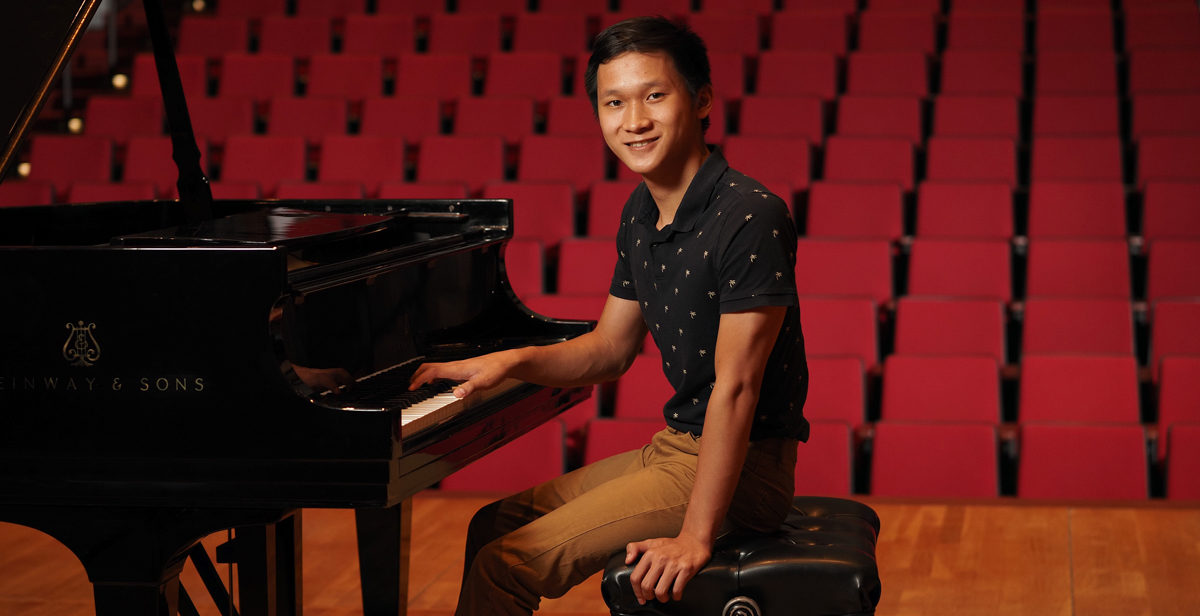 Paul Nguyen is studying music and electrical engineering at the University of South Alabama. “After studying all day, music helps me release all of that. It’s definitely freeing, but if you want to play at a high level, you have to concentrate. There’s a lot of discipline,” he said.

Paul Nguyen grew up in Beaverton, Oregon, just outside Portland, so he thought he might study engineering on the West Coast.

Instead, he crossed the country to enroll at the University of South Alabama. He’s a pre-med student with a double major of music and electrical engineering.

Nguyen never visited Mobile before coming to South, so he’s still adjusting to the culture and climate.

“I knew it would be hot and humid, but I didn’t know it would rain so much,” he said. “There was a lot of rain in Portland, but it’s different – cold and miserable. Even the rain culture is different. Nobody there carries umbrellas. They all wear rain jackets.”

After Nguyen’s mother, Teresa Tran, immigrated from Vietnam, she lived in Mobile and earned a degree in mathematics and statistics from South in 1990. That connection led to his college choice, especially after a successful audition for the music program.

“South offered me some good financial aid, but it really came down to my mom graduating from here,” he said. “She was the one who told me about South Alabama. She liked the idea of me going to an institution she trusted.”

Were you nervous about your piano audition for South?

“I’m always a little nervous before a performance. Because it was online, a Zoom call, I got to play on my own piano, and that helped. I think I played Beethoven’s ‘Tempest’ sonata and Ravel’s ‘Sonatine.’”

How does college life compare to high school?

“It’s busier, for sure. I don’t know that it’s harder, but you do have to train yourself in time management. I came from a really competitive high school, Westview High School, and we had a lot of Advanced Placement classes, so I was able to start college in Calculus III.”

What do you do in your free time?

“I listen to some K-pop, a group called DPR. Sometimes, with my friends, I play a videogame, Teamfight Tactics, which is a spinoff from League of Legends. It’s like a board game on a computer, and you try to make a team to fight other boards. I think I reached the top 800 players on the continent.

“In high school, I did some swimming. Here, I swim laps at the Student Rec Center. I used to do a workout of 3,000 yards. Now, I try to do a mile. In the evenings, the pool is open until 8, if I get out of class in time.”

Have you gotten a chance to try Mobile culture and cuisine?

“I’ve been to a Florida beach, in Pensacola. I have a meal plan, so I usually eat in the cafeteria. And I’ve got a pressure cooker in my residence hall. Stir-fry, basically. Rice, eggs and soy sauce. I like to let the soy sauce evaporate so it soaks into the rice, and you get a smoky flavor.”

You’re studying music and electrical engineering. Are they completely different, or a lot alike?

“I feel like they’re different. Sitting down to do math or STEM homework is different from sitting down at the piano. After studying all day, music helps me release all of that. It’s definitely freeing, but if you want to play at a high level, you have to concentrate. I’m not playing to have fun. There’s a lot of discipline.”

You haven’t lost any of your love for music?

“When I was in high school, I found it kind of hard to practice. I would play maybe an hour a day. Now that I’m here, once I’m in the practice room, I can crank out three hours, easily. It’s like a different mindset.”

And you plan on going to medical school? What kind of physician would you like to be?

“I have a lot of family in radiology, so I’m looking at that, but I’m keeping my options open. Seeing what I like.”