Now in Police Boots, He Walked In Students' Shoes 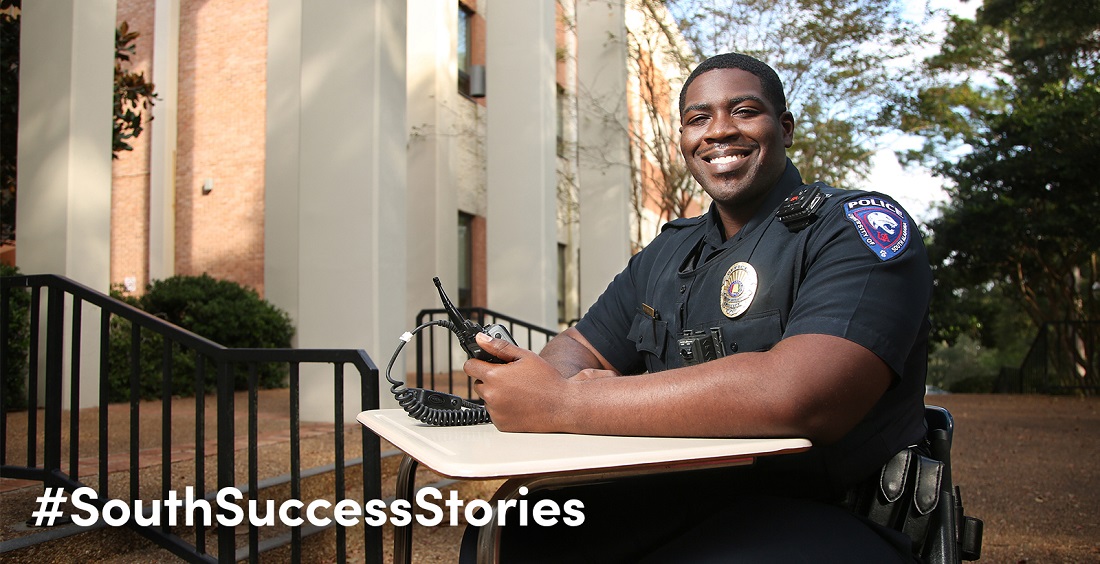 University of South Alabama Police Officer Roy Mendenhall, sitting in front of the Humanities Building where he once took classes, earned a degree in criminal justice in 2016. He's one of three officers at South who graduated from the University that same year.

“They’re having a bad day.” That’s how University of South Alabama Police Officer Roy Mendenhall thinks of the people he encounters in the line of duty. So he treats them accordingly — as decent people who, at that moment, are not at their best.

A big percentage of on-campus calls involve such minor incidents as “jump starts and unlocks,” he said. “It might be finals week, and you’re stressing over your finals, and then you locked your keys in your car or your car won’t crank. You’re just having a really bad day.

“So in the process of dealing with that, we can give them a kind word. We’re here to help them. We’re not here to lock them up or give them a ticket. We want to avoid that as much as possible.”

Mendenhall and his fellow officers can definitely identify with the student experience at South. Of the 18 officers who patrol the main campus and USA Health facilities, most graduated from South. Mendenhall earned his undergraduate degree in criminal justice in 2016.

Even in situations involving something far more intense than a frazzled student’s frustration with an uncooperative car, he still takes a de-escalating approach. “Sometimes you have to be an authoritative presence on the scene,” he said. “But you also talk to them like a human. Talk to them like a person.”

With his imposing physique and deep voice, he can be an authoritative presence without difficulty. His biggest asset, though, may be his empathy. “They could be going through something else in their life, or a friend might be going through something that’s affecting them,” he said. “So if possible, I just try to talk it through with them and find out what else is going on.

“Once you bridge that gap, once you act humane toward them, just relating to them as a person, they’ll be more willing to cooperate. Maybe they had a bad experience with law enforcement in the past, but we can show them that not everybody’s the same.”

USA police are sworn state law enforcement officers who receive 13 weeks of training at the state training academy in Selma, just like, for example, state troopers with the Alabama Law Enforcement Agency. Chief Zeke Aull strongly encourages members of the department to take advantage of deep tuition discounts to continue their education at the University as well. Several have or are working toward master’s degrees. Mendenhall plans to be one of them.

He began as an engineering student. When he realized he didn’t have a strong enough physics and math background, he switched to criminal justice. Upon graduation, though, he decided against a law enforcement career.

“With everything going on around the country with how the police were viewed among the citizens, I didn’t want to be associated with it at the time,” he said.

Instead, he kept his job in the kitchen at a restaurant in Mobile. “I like to cook,” he said. “That’s another way you can make people happy.”

Eventually, after some reflection and conversations with his parents and friends, he changed his mind. He began to see police work as “a way to give back to the community” by showing a positive example of justice tempered with compassion. He joined the department in early 2019.

Today, many areas of the country are experiencing some of the same tensions between police and the people they serve that gave Mendenhall pause four years ago. “To make sure we don’t get to that point,” Mendenhall said, “we want to bridge the gap between law enforcement and students.”

Everyone from rookie officers to Chief Aull makes a point of informally interacting with the University community — chatting on the sidewalk during routine foot patrol, meeting over coffee with members of various organizations, sitting with students in dining halls. (COVID-19 protocols have unfortunately curtailed some of those activities for now.)

When he came to South, he found a wider world. Mobile offered much more to do and, to his particular delight, lots of restaurants to explore. On campus, he got a taste of police work by serving as an auxiliary officer at sports events. He got to know some of the officers who are now colleagues and, in handling the tricky role of being both student and law enforcer, honed his empathetic approach to projecting authority.

In and out of the classroom, he felt at home. He still does, even when dealing with people having those bad days.