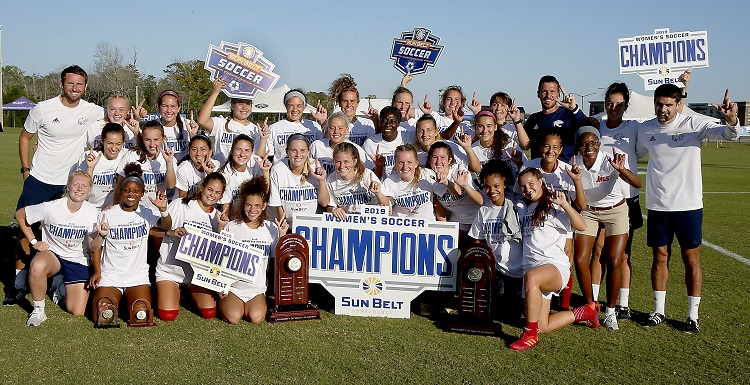 The University of South Alabama Jaguars are the Sun Belt Conference Women's Soccer Tournament champions after a 5-1 win over Arkansas State.

For the sixth time in the last seven years, the University of South Alabama Jaguars are the Sun Belt Conference Women's Soccer Tournament champions. USA claimed the title Sunday with a 5-1 win over Arkansas State at the Foley Sports Complex.

After missing out on a title last year, the Jaguars exploded for three goals in the first half of the championship match, and assured another championship with two second-half scores.

“You step back, you self-reflect after a poor season and you just regroup,” Coach Richard Moodie said. “We talked all day about respecting every opponent because last year that happened to us as well when we were losing. To be where we're at right now, I'm extremely proud.”

Moa Öhman scored two goals on the day for South. Briana Morris, who scored her 16th goal of the season in the first half, was named the tournament's most outstanding player. Morris and Öhman were joined on the all-tournament team by teammates Tabea Griss, Justice Stanford and Brenna McPartlan.

With the win, the Jaguars improve to 16-3-2 on the year and will head to the NCAA Women's Soccer Tournament to face Florida State in the first round Saturday. (UPDATE: The Jags fell to No. 1 seed Florida State. USA ended its year at 16-4-2.)

"It's exciting just to be in the national tournament," Moodie said. "At this point in the year, you're against the elite, the best of the best. The current national champions – what better game? We've played them every year, why not again?"

The Seminoles earned one of the four top seeds and enter the tournament with a 15-5 record.

“We want to go on and make the Sun Belt proud,” Moodie said. “South Alabama has made it to the second round before, so when you talk about making the program better, that's something that the girls call BHAG: Big Hairy Audacious Goals. We want to represent the conference and I think we're the right team to do it.”