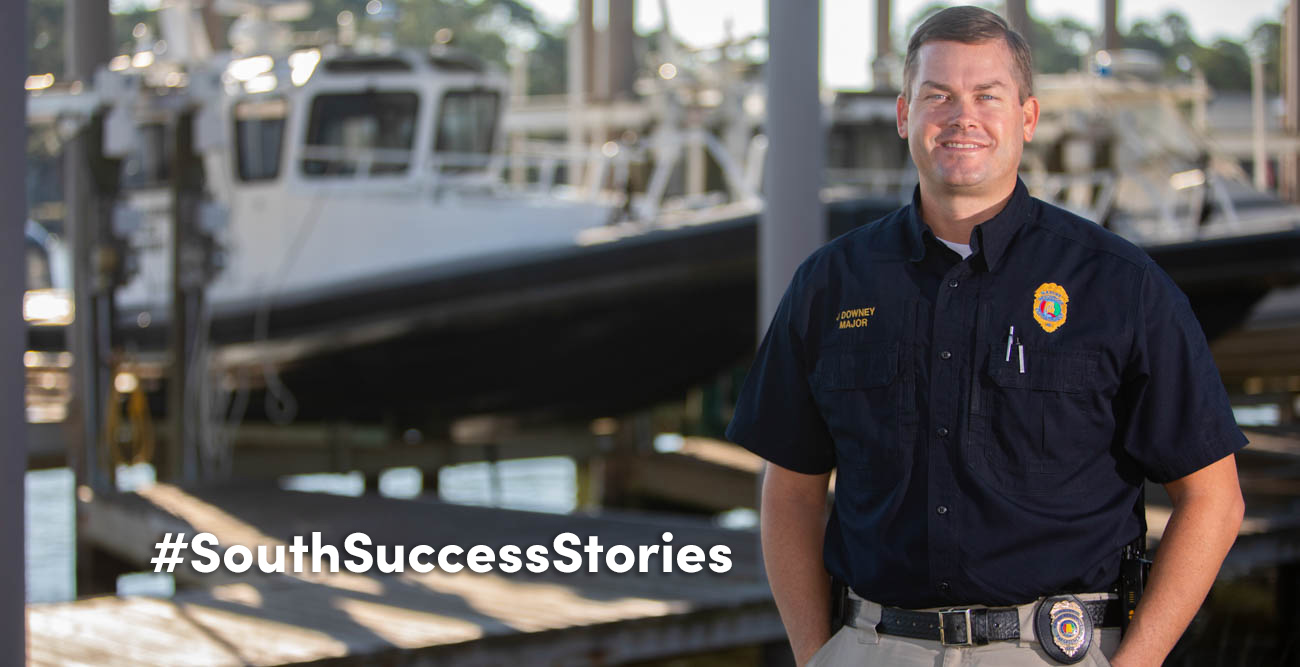 Maj. Jason Downey, a 2002 graduate of the University of South Alabama, has been named chief enforcement officer for the Marine Resources Division of the Alabama Department of Conservation and Natural Resources.

By Jason Downey’s best recollection, he was about five years old when his two grandfathers began taking him to the woods and waters of Alabama to fish, ski and hunt.

As natural as Alabama’s outdoors felt to him growing up, however, it wasn’t until he found himself on a ride-along with a lieutenant for the Marine Resources Division of the Alabama Department of Conservation and Natural Resources that he realized with all certainty exactly what he wanted to do with his career.

Sixteen years after landing his first job with the Alabama Department of Conservation and Natural Resources, Downey has been named chief enforcement officer for its Marine Resources Division.

A 2002 University of South Alabama graduate, Maj. Downey says that leading the enforcement of state laws that deal with Alabama’s waterways has only increased his conviction that conservation is essential.

“Everything we do is for the public to be able to continue to enjoy all the wonderful natural resources Alabama has to offer,” he said. “I’d like people to think about how great it is and how it would be if we did not have it.”

Downey grew up in west Mobile the son of two educators. He graduated from Theodore High School and won a leadership scholarship to another university. His initial plan was to pursue coaching, a path that would have led him in footsteps laid by father Joe Downey, a longtime football coach for Theodore High School who enjoyed a 40-year coaching career.

But being three hours from home didn’t feel right to Jason Downey. After his freshman year of college, Downey transferred to the University of South Alabama. Here, he was closer to his family — and, not coincidentally, his future wife and future South alumna, Mindy, whom he’d dated since high school.

Following that eye-opening ride-along, Downey sought input from South’s counselors about how he could leverage the college courses he’d already taken into a degree that would best position him to quickly begin work with the Department of Conservation and Natural Resources. He’d already collected many of the credits needed to obtain a bachelor of science degree in sociology, so that’s what he chose.

Downey was so motivated to get to work, he landed a job as an aid with the agency in his final year of college. Soon, he rose from a laborer in the enforcement section to being named a conservation enforcement officer in 2004. Eight years later, Downey became a lieutenant, overseeing conservation enforcement in Mobile County. He spoke about his job in a 2014 video produced by the Alabama Department of Conservation & Natural Resources.

Today, he resides in Daphne with Mindy and their two daughters, ages 8 and 10. Downey’s job has taken him pretty much anywhere water goes or touches, from diving during search and rescue missions to checking fishing licenses to inspecting seafood shops and more. Downey is also certified by the Federal Bureau of Investigations to provide firearms training to his officers and supervisors.

In his new position overseeing the division, Downey says he’s becoming reacquainted with his love of coaching. “I really enjoy dealing with the people I supervise,” he said. “It’s kind of like being head coach. You’re the leader of the team.”