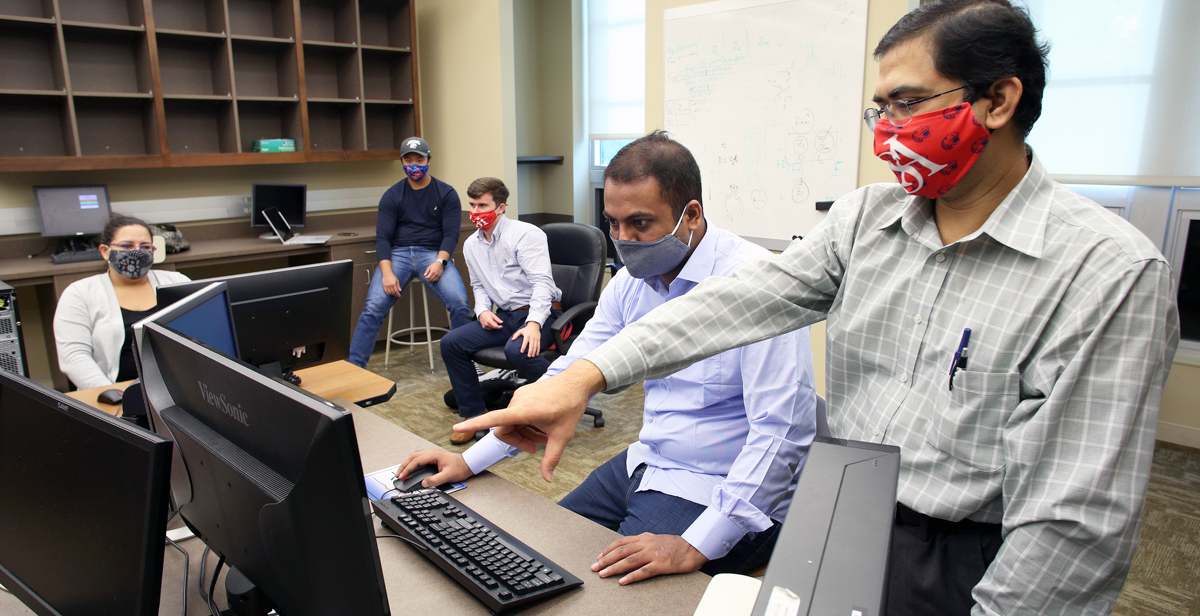 Dr. Saeed Latif and a group of engineering students at the University of South Alabama are preparing to explore space with a satellite project called SWARM-EX.

The plan is to launch three identical CubeSats – miniaturized, light-weight and low-cost satellites – to form a small constellation orbiting around the Earth. The satellites will feature new technologies for advanced data downlinks, radio communication among satellites, and onboard propulsion for autonomous operations within the swarm. The mission includes public outreach and science education for undergraduate and graduate students.

“Typically, satellites cost millions of dollars and take years to send, so most researchers don’t have access to them,” said Latif, an associate professor of electrical engineering. “With this one, we’ll build it in three years, fly in the third year, and in the fourth year we’ll do the experiments.

“This is good experience for the students. They get to participate in a big project with different phases and processes.”

Work on the satellites began in January. Launch is expected in 2023.

The latest student engineers to join SWARM-EX at South describe the program as an out-of-this-world opportunity.

Josh Yang, a junior from Gulf Shores, learned about the project from a classmate.“It just seemed cool to me, to build an electrical power system for something like a satellite,” he said. “I’ve never had practical experience like that.”

Aaron Mattox, a junior from Semmes, found the satellite work demanding but rewarding.

“It can be overwhelming,” he said. “We’re at the very beginning of the project, so I try to take it one task at a time. I think of it as a really good learning experience.”

Latif was awarded a $218,000 grant from the National Science Foundation to run the program at South.

The CubeSats will orbit the earth at an altitude of 300 to 600 kilometers, measuring ionized and neutral gases in the Earth’s upper atmosphere. Each CubeSat will include an atomic oxygen sensor and a Langmuir Probe to study the evolution of the equatorial ionization anomaly and equatorial thermospheric anomaly.

Large groups of satellites offer an opportunity to understand these anomalies and predict space weather. Yet the actual spacecraft are small, measuring just 10 by 10 by 30 centimeters.

“Each of them,” Latif said, “would be the size of a shoebox — actually, smaller than a shoebox.”

Latif is involved in another satellite project, called JAGSAT-1, that could launch next year.

Crystal Pitts, an engineering senior from Daphne, has been working on JAGSAT and SWARM-EX.

“With the first one, I jumped in after it started, so I didn’t get to see a lot of it,” she said. “This one just got started, so I get to plan out what I need and what I can provide. That’s a lot cooler than coming in when it’s almost finished.

“For SWARM-EX, we’re still at the stage of what-ifs, so we have more questions than answers. We’re figuring out what components we need and how to fulfill our requirements.”

Pitts’ father, Paul Barrios, earned an engineering degree from South in 2001. Now he works in California for the aerospace industry.

His daughter is more interested in solar cells than satellites, though she can’t deny the appeal of “shooting stuff into space.” She believes it’s important to develop solar energy as an alternative to fossil fuels. Most solar cells are made of silicon, but the CubeSats will use gallium arsenide, which is more efficient — and exciting.

“These are the big boys of solar cells,” Pitts said. “They can put out a lot of power.”

In Shelby Hall, which houses South’s College of Engineering, a sign on Room 3217 says “Microwave/Antenna Lab.” This is the home of SWARM-EX.

There are a few pieces of equipment in the lab, but most of the space is occupied by conference tables and computer stations. Latif meets with students once a week to plan work and review progress. South students also are collaborating with students at other institutions.

“Even before the coronavirus pandemic,” Latif said, “most of our work in this project was done remotely, as it involves students at multiple universities.”

The exception to that rule is the corner work station of Muhammed Mubasshir Hossain, a graduate student from Bangladesh. That’s a long way from Mobile, but for him it makes perfect sense.

“My undergraduate thesis was on small satellites,” he said. “I learned online about Dr. Latif and his work at South Alabama.”

The working title for Mubasshir’s master’s thesis at South is “Circularly Polarized Antennas for CubeSats for Deep Space Missions.”

The undergraduates who have joined SWARM-EX carry laptops that allow them work anywhere.

At home in Semmes, Mattox, 20, studies satellite technology in the evening and on weekends. He likes to have a little country music playing the background.

In his west Mobile apartment, he’s more of a morning person.

“If it’s an off day with no classes, I work on the SWARM-EX project during the day,” Yang says. “I find it easier if it’s quiet.”

Pitts, a 29-year-old single mom, lives on the Eastern Shore with her two sons. Her research follows a different kind of afternoon schedule.

“After my kids get off the bus, they have a snack and do their homework,” she said. “I do at least two hours of satellite work a day.”

Pitts enjoys collaborating with students and professors at the University of Colorado and other colleges. There are a lot of bright engineers working on SWARM-EX. The only problem is that she’ll graduate this year and move on from the program.

That’s why she’s training her replacement. Soon she hopes to land a job that is just as challenging.

“If there was an opportunity to do this kind of project for a company,” Pitts said, “I’d love to do that.”