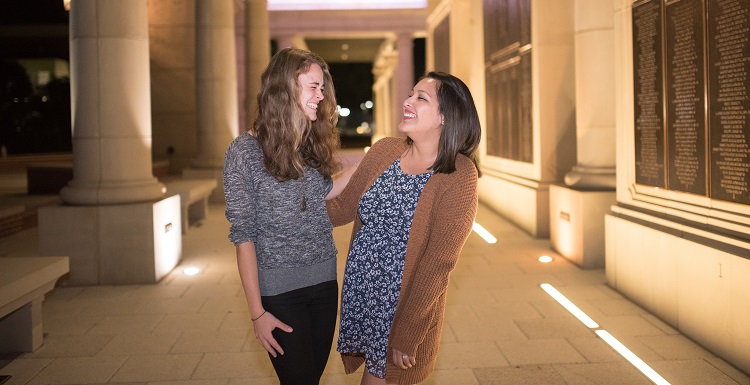 Rebecca Fitz, left, is visiting the United States through a bilateral student exchange program. Patricia Bellido Jara, a South student, attended Fitz's University of Passau in Germany in the spring. "There’s no question the cultures are different – and that can be a shock – but each place I visited was unique in its own way," Bellido Jara said.

Nearly 7,000 miles separate the hometowns of Patricia Bellido Jara and Rebecca Fitz, but the University of South Alabama’s international student exchange program has erased that distance, offering each a taste of the global experience driving their studies.

Bellido Jara, a senior double majoring in psychology and German, spent her spring 2016 semester at the University of Passau, a public research university located in Lower Bavaria, Germany.

Meanwhile, Fitz is a Stuttgart, Germany, native studying international culture and business studies with a focus on American culture, and isn’t shy about admitting she selected South from Passau’s list of partner universities partly because of its warm Gulf Coast climate.

“Obviously Study Abroad helps your language skills,” Fitz said in practically flawless English before adding the experience allows participants to “get out of the everyday, routine life you’re living.”

“We’re young, and we should not settle down yet. And it’s simple things, really. You have to figure out if you like it better when the sun is shining or when it’s snowing. I want to leave my heart in different places of the world. Traveling makes you feel more connected,” she said.

The University has more than tripled its number of Study Abroad students in the last two years, and has bilateral foreign exchange programs with ten Universities.

“Our students, and those from other countries who visit South, have found intercultural exchange to be incredibly rewarding,” said Bri Altier Ard, assistant director of international education and Study Abroad. “They are having experiences, both inside and outside of classrooms, that are shaping their view of the world and giving them a global educational perspective that will be useful no matter their discipline.”

Ard’s office this week hosted a series of events for International Education Week, a joint initiative of the U.S. Department of State and the U.S. Department of Education to promote programs that prepare Americans to succeed in the global economy, foster cultural exchange, and encourage future leaders worldwide to engage in study abroad and exchange experiences.

Despite their overlapping experiences, Fitz and Bellido Jara only met in person one month ago when Fitz began tutoring Bellido Jara in German through the Language Resource Center.

“I knew Rebecca was here, and everyone kept encouraging me to take advantage of that because she’s a native speaker, but I was nervous and a little intimidated, I guess,” Bellido Jara said.

Fast-forward four weeks, and the two giggle about her hesitation.

“She was avoiding me,” Fitz joked of Bellido Jara, “and I don’t have any idea why. Her German is very, very good.”

It helps, Bellido Jara said, that her early education in Peru taught German – not English – as a second language to Spanish, yet by the time she began her studies at USA she felt she had lost much of that foundation after moving to Mobile in high school.

Her professors disagreed, though, and encouraged her to pursue the double major. In turn, she said the experience might redirect her career path.

“I've had a couple of internships in the psychology field, but I am not sure if it is something I want to continue to do. Lately, I have been leaning more toward teaching,” Bellido Jara said.

Meanwhile, Fitz, who is only in her second of three years at Passau and might pursue a master’s degree, said she’s definitely thinking globally about her career options.

“If I could choose right now I would like to work in a chamber of commerce. It has to be an international institution/company for sure,” she said.

Bellido Jara, who was accepted for the Passau exchange only after her second try due to strong demand, said she simply cannot stress the positive impact the experience has had on her studies, making her glad she persevered and applied a second time.

“It opens you up. You discover things about yourself you wouldn’t be able to at home, and it definitely exposes you to new experiences,” she said, adding, “Traveling in Europe is really cheap compared to the U.S. There’s no question the cultures are different – and that can be a shock – but each place I visited was unique in its own way, whether it’s how they’re living or what they’re eating.”

So what’s on the menu in Passau?

“They eat a lot of pork,” said Bellido Jara, eliciting another affirmative giggle from Fitz, who likened the broader perspective of Bavaria by the rest of Germany to the way Americans view Texas.

“Bavaria really is like its own little country inside a country,” Fitz said.

Bellido Jara also noted the German approach to studies can be jarring to American students.

“I was excited to be going to such a small city because I knew I wouldn’t get to practice English much and it would force me to practice my German, but things are a lot more independent there. Over there, your grade only depends on the final exam, so you have to push yourself to study. Here, you get homework and reminders, and there just seems to be more guidance,” she said.

“It sounds horrible to say, but nobody there cares if you fail. If you fail, it’s your fault,” Fitz said. “That’s not to say they won’t help you if you have problems, but the approach really does push you to be independent.”

There are other differences.  Campus life is a foreign concept in Passau, she said, where students live in “private flats” as opposed to in the United States where “you can go weeks and never leave campus.”

Which brings us directly back to Mobile’s warm weather.

“I always wanted to come to America. The fact that it’s so warm here really helped me make my decision on which school to go to. I knew that it was going to make me go out more and meet people instead of staying inside and bundling up,” Fitz said, noting she also appreciates the hands-on approach to her studies here.

“I feel like I read more here. I write a lot. I have a lot of papers which really helps me with my English, and it’s helping me to learn how to write better,” she said.