The University of South Alabama completed its $150 million Upward & Onward campaign on September 30, exceeding its goal by $10.9 million by raising $160.9 million, the University announced today. More than 23,000 individuals, businesses and foundations donated to the campaign.

The campaign publicly kicked off in 2015 with an emphasis on supporting five strategic priorities: Student Access and Success, Enhancement of Research and Graduate Education, Global Engagement, Excellence in Healthcare, and University-Community Engagement. Dr. and Mrs. Steven and Angelia Stokes, both USA alumni, served as co-chairs of the Upward & Onward campaign.

“Angelia and I have been honored to serve the University in this ambitious campaign,” said Stokes. “USA has given us so much, and we are confident that, because of the success of this campaign, many more students and the community will reap the benefits for years to come.” 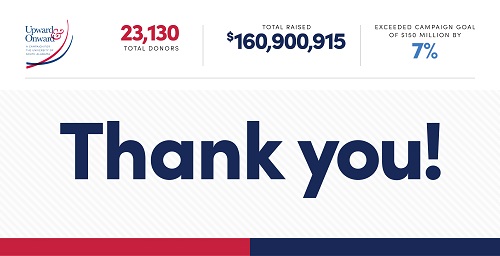 Upward & Onward is the second, and largest, campaign in the University’s history. Since 2015, the University and USA Health have completed funding for 11 capital building projects, adding more than 718,000 square feet to the University’s facilities. A few of the projects include Hancock Whitney Stadium, the Health Simulation Building, the Fanny Meisler Trauma Center and the MacQueen Alumni Center.

Longtime USA supporter Abraham “Abe” Mitchell invested a record $50 million gift in 2013, during the quiet phase of the campaign, which led to the creation of the University’s landmark Mitchell-Moulton Scholarship Initiative. Throughout the campaign, the Initiative matched more than $17.5 million in gifts, for a total of $35 million raised in support of student scholarships.

“We have not only increased the ability to serve more people through the addition of new facilities,” said USA President Dr. Tony Waldrop, “the campaign has elevated every aspect of the University by opening doors for students, advancing groundbreaking research and enhancing life-saving treatments for the people of the Gulf Coast region.”

Enhancement of Research and Graduate Education