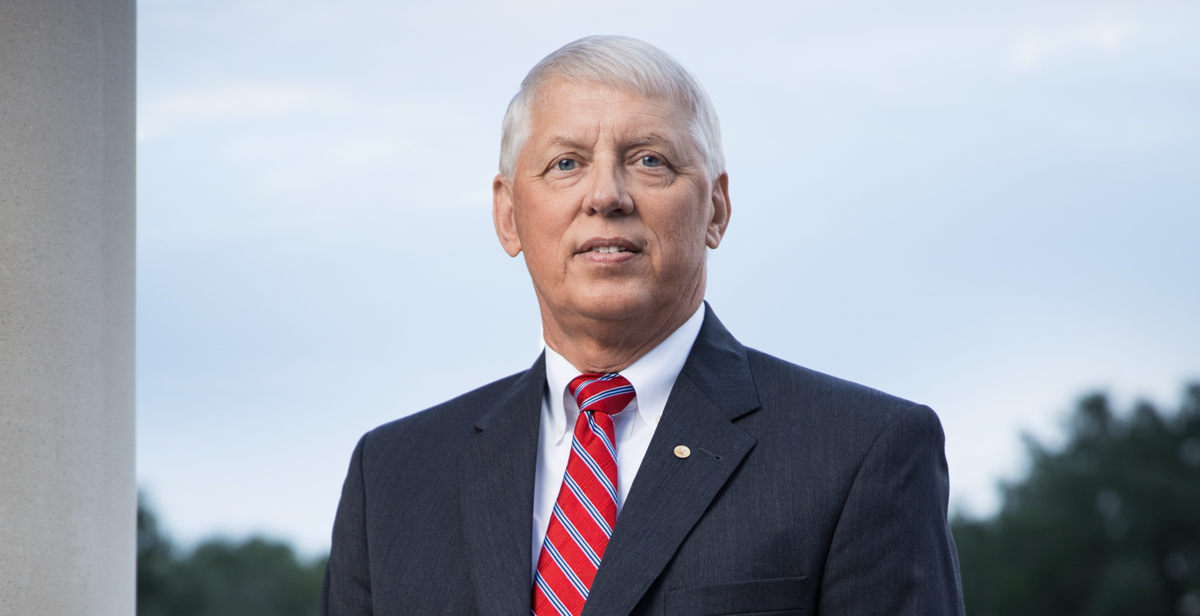 Dr. Tony G. Waldrop, who helped raise academic standards, elevate research and usher in a new era at USA Health as the third president of the University of South Alabama, died Saturday in Chapel Hill, North Carolina, after a long illness.

After leaving South in 2021, Waldrop, 70, returned to his native North Carolina with his wife, Julee, who became assistant dean of the Duke University School of Nursing.

“President Waldrop was a pivotal figure and determined leader for the University of South Alabama,” said Arlene Mitchell, chair pro tem of the USA Board of Trustees. “He was instrumental in the extraordinary growth at USA Health and helped us develop and mature as an institution of higher learning.”

His years at South, beginning in 2014, saw great change at the University and USA Health.

During his presidency, the University started an Honors College, developed the School of Marine and Environmental Sciences and constructed Hancock Whitney Stadium. South significantly increased retention and graduation rates, bolstered study abroad programs, added more than a dozen degrees to its offerings and launched the Pathway USA program for transfer students, increasing access to and affordability of a four-year degree.

It also completed an Onward & Upward comprehensive fundraising campaign that raised more than $160 million for the University and USA Health.

Waldrop led dynamic growth of USA Health by hiring new leadership and developing a comprehensive strategic plan focused on being the only academic health system in the region. Research and education programs were expanded, as were primary and specialty care practices across the region. A new Fanny Meisler Trauma Center at University Hospital opened, $50 million was secured from Gov. Kay Ivey to build a new College of Medicine, and work began on the Mapp Family Campus in Baldwin County and the freestanding emergency department on Hillcrest Road in west Mobile.

“Dr. Waldrop lifted research activity and academic standards at the University of South Alabama and set it on a course for future growth and success,” said President Jo Bonner. “His legacy lives on in each of us through this commitment to education, research, service and healthcare. We will honor him as we build on his contributions at the Flagship of the Gulf Coast.”

Waldrop was a quiet academic and disciplined administrator who often woke before dawn. He enjoyed morning walks with his wife. He refused to accept individual praise for University achievements, saying they were all group efforts.

“The goal has always been, no matter what the position I had in administration, to leave things better than the way they were,” he said in 2021. “I really do think the University is better than what it was when we came here, and that gives me satisfaction.”

At South, Waldrop was shy to speak about one of his most remarkable personal accomplishments. In 1974, as a track star at the University of North Carolina, he set a longstanding world record of 3 minutes and 55 seconds in the indoor mile. The next year, instead of preparing for the Olympic Games, he quit competitive running to focus on earning his Ph.D. in physiology.

In 2014, he was named the third president of the University of South Alabama, following the administration of Frederick P. Whiddon and V. Gordon Moulton.

Dr. Sean Powers, professor and director of the School of Marine and Environmental Sciences, considers Waldrop an important president in the history of South. After Whiddon, the founder of the University, and Moulton, the builder who revitalized campus, the University gained from the leadership of an academic researcher who could recruit professors and motivate faculty to improve standards.

“We needed Tony Waldrop for that stretch,” Powers said. “He set the course for increasing the rigor of research and academic achievement here. I think that’s his claim to fame at South.”

Powers, like many on campus, had to learn from others that Waldrop had been a track star and world record holder. He became a friend of the Waldrops and often visited with them on Dauphin Island, where the Waldrops had a condominium. The couple’s partnership and shared vision immediately stood out.

“From the faculty point of view, he was very interested in everything we and our students were doing as far as research and professional development,” Powers said. “He was a traditional academic, and I think he enjoyed that part of his job the most”

“That was a pivotal moment in our history,” said Dr. Julie Estis, president of the Faculty Senate at the time. “There was a lot of excitement and newness around that whole experience of inaugurating a new president. He laid out those five priority areas that really shaped his tenure here at South.

In addition to Hancock Whitney, construction on the University campus during Waldrop’s presidency includes the MacQueen Alumni Center, a Health Simulation Building for the healthcare professions, and the Camellia student residential hall.

Near the end of Waldrop’s administration came the COVID-19 pandemic, which brought disruption and uncertainty. Waldrop assembled a University committee that included USA Health epidemiologists and infectious disease specialists to help in the decision making process.

“He looks at the situation through the lens of a researcher,” said Estis, the University’s COVID-19 response coordinator, in a 2011 profile on Waldrop. “He finds out all the information about whatever topic or decision it is, and he will take time to consider it, carefully weigh it, and let that inform his decision making.”

Tony Gerald Waldrop grew up in Columbus, North Carolina, south of Asheville in the foothills of the Appalachian Mountains. His father was an industrial machinery mechanic with a sixth-grade education, while his mother was a high school graduate and receptionist.

He was a track athlete who attended the University of North Carolina on an academic scholarship.

Waldrop became a six-time All-American, won a gold medal in the 1975 Pan American Games, and set his world record in the indoor mile. The Olympics beckoned, but Waldrop left the pressure of elite racing for the challenge of a new career.

“He had a decision to make,” recalled teammate and longtime friend Larry Widgeon. “Do I become a scientist and pursue academic exploits, or do I train for the Olympics? So, he just said, ‘I’m not going to run competitively anymore. I’m going to run for fun.’”

Funeral arrangements will be announced by the family. In addition to his wife, Waldrop is survived by the couple’s two children, Cabe and Dallas, and extended family.