Tied Up In Knots 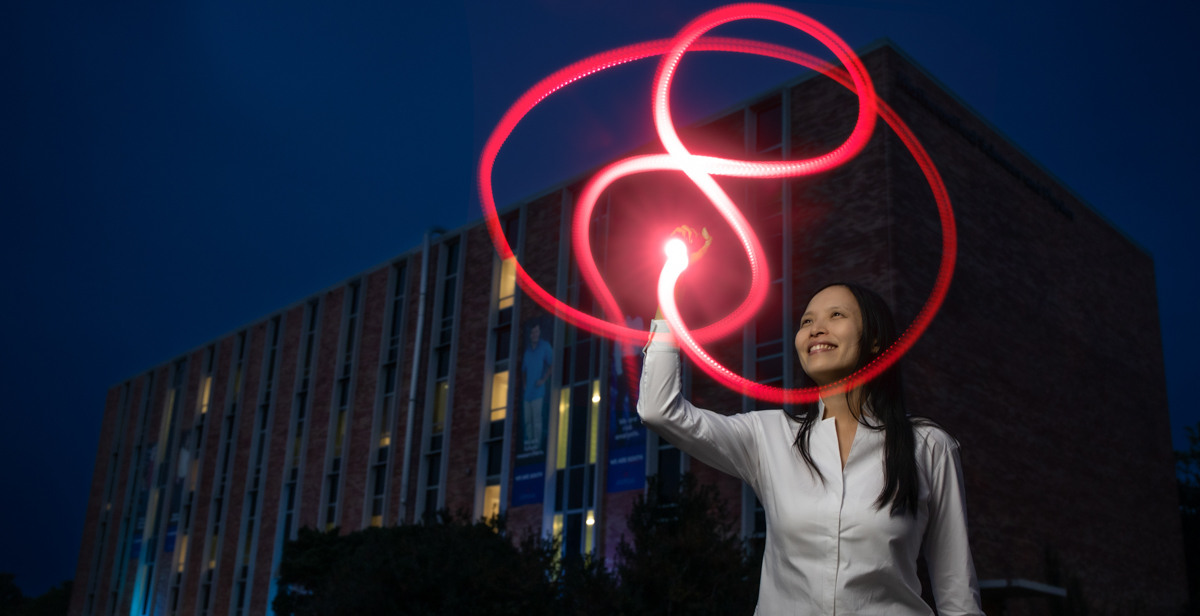 Dr. Christine Ruey Shan Lee traces a figure-eight knot with light outside the Mathematical Sciences and Physics Building at the University of South Alabama. Her research in quantum topology earned a grant from the National Science Foundation.

When Dr. Christine Ruey Shan Lee explains her research in knot theory, she likes to bring along visual aids.

“I say that I study shapes,” said Lee, an assistant professor of mathematics at the University of South Alabama. “Recently, I gave a colloquium talk about the shape of the universe, and that seemed to work with students. I also brought in donuts, because in topology a donut’s the same shape as a coffee cup. If you imagine they’re made of stretchy material, like Play-Doh, they’re the same. … It’s also a great excuse to bring in donuts.”

Lee, 36, has the easy laugh of someone who enjoys working with people. She can’t imagine being a mathematician without teaching undergraduates or guiding graduate students.

“I need some connection,” she said. “Every class is different and every student is different. And it’s very interesting to have someone to study a problem with. Every time I face a new problem, it’s the same. I feel like I’m learning along with the students.”

Lee still works with Dr. Effie Kalfagianni, her mentor at Michigan State University, where she earned her Ph.D. in mathematics. They share ideas, questions and problems with colleagues from Georgia Tech to the University of Iowa, along with researchers in Australia and the Netherlands.

“Mathematicians are actually very collaborative,” she said. “I enjoy that aspect. We talk to people all the time. We Zoom, we Skype, or we meet at conferences.”

The field of topology considers the properties of geometric objects that are unaffected by change in size or shape. It is sometimes called “rubber sheet geometry,” because objects can be stretched and contracted, but not broken. For non-mathematicians, drawings are helpful, because descriptions of this work soon grow dense.

In knot theory, mathematicians study closed loops in a three-dimensional space. Knots that cannot be transformed into one another are considered different, or inequivalent. Key tools for distinguishing these knots are called invariants. An important knot invariant, the colored Jones polynomial, lies at the heart of quantum topology, low-dimensional topology and hyperbolic geometry.

Lee has contributed to journal articles such as “The slope conjecture for Montesinos knots,” in the International Journal of Mathematics, and “Stability and triviality of the transverse invariant from Khovanov homology,” in Topology and Its Applications.

Her work is pure mathematics, though there are applications in quantum physics and other fields. Companies such as Microsoft employ mathematicians in her area for research on quantum computing.

Lee’s most recent research continues work funded by a $109,000 grant from the National Science Foundation. She’s exploring the relationship between quantum knot invariants, a relatively less understood family, constructed from the ideas of quantum physics and mathematics. The grant served as confirmation and support for her research.

“This was huge,” she said. “I’ve been thinking about this since I was a graduate student. Writing a proposal is like a promise of what you’re going to do. That’s great, but I always feel a lot of responsibility.”

Dr. Madhuri Mulekar, chair of the department of mathematics and statistics at South, called Lee’s NSF grant a great accomplishment. “We’re lucky to have her,” she said. “She’s a great addition to our department.”

Mulekar happened to attend Lee’s recent talk with students — the one with the donuts.

“It was wonderful,” she said. “She’s a really in-demand teacher. I see students coming up to her and asking questions all the time. She’s very patient and fun to talk with.”

At Michigan State, Kalfagianni remembers working on two papers with Lee while her student was busy writing her dissertation. They met weekly and always ended up talking longer than they'd planned.

"Dr. Lee’s work has matured and broadened its scope over the years," Kalfagianni said. "She is doing important work at the interface of Jones-type quantum invariants and classical knot theory, where she has firmly established herself as an expert. I often write to her when I have questions or thoughts in this area, and she is always helpful.”

‘It’s Knot What You Think’

Lee’s office at South has a view of oaks and pines, but most of her shelves are bare. A chalkboard facing her desk is covered with equations from a problem she’s working on with a graduate student.

There are a few posters on her walls.

“Mathematical Research — It’s knot what you think,” reads the copy of one poster from the American Mathematical Society. “That is, mathematical research is not adding, multiplying and dividing big numbers. It is asking questions, on subjects ranging from how proteins fold to the shape of the universe, answering those questions by finding patterns or unifying principles, and proving that the answers are valid.”

A filing cabinet in one corner holds a few pieces of origami, along with a 3-D printed model of a topological construct called a Klein bottle.

“It’s a non-orientable surface,” Lee explained. “It doesn’t have an inside or outside.”

Finally, next to her desk, there’s a hand-colored folding sign for weekly meetings of Girls Who Code, a computer organization for middle school students. The group at South was started by Dr. Selvi Kara, who was a colleague in the math department.

“We meet once a week and we code,” Lee said. “It’s a lot of fun. It’s more fun in person, I think, because you can see their faces.”

Lee grew up in a Taiwanese-American family in Alhambra, California, just outside Los Angeles. Her father was a physician. He expected his daughter to become a physician, too.

Instead, Lee began a career in mathematics at the California Institute of Technology.

“It just appealed to me,” she said. “The way you can make arguments visually. It’s beautiful. Mathematicians, when we say something’s beautiful, it doesn’t always convey what we mean. The fact that there’s this deep relationship between the things we study, that’s very beautiful to us.”

Her parents didn’t share her preference for math over medicine — “that was pretty traumatic for them” — but felt better when she earned her doctorate at Michigan State. (And one of her younger brothers did become a physician.) Lee did post-doctoral research at the University of Texas before joining the faculty at the University of South Alabama in 2018.

In Mobile, Lee lives in Midtown, and enjoys a short commute to campus. She says she doesn’t really have any hobbies or side interests. Research is her focus.

“It takes so much effort just to be a mathematician, at least for me,” she said. “I’ll be doing the dishes, thinking about this proof, or something I just read.”

When pressed, Lee will admit to binge-watching television series. Right now, it’s a cold war drama, “The Americans.” She’s usually a few years behind the times.

“I don’t like watching things that haven’t been concluded,” she said. “It’s too much to think about.”

There’s always something new to think about in knot theory. All she needs is a sheet of paper, for drafting figures, or a laptop computer, for conferring with colleagues.

She comes up with ideas and shares them with others. They respond and she thinks about what comes next.

“I enjoy mathematics — I enjoy it very much,” she said. “Every morning I wake up, and I’m happy.”