South Teams Up With Yale on Mosquito Research 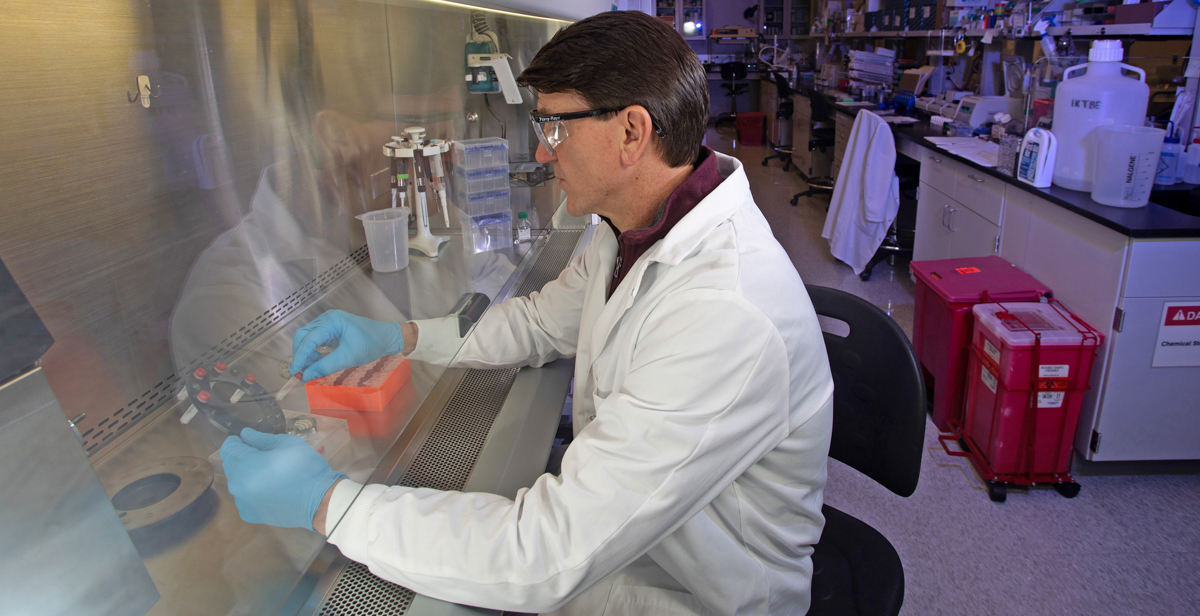 Dr. Jonathan Rayner, associate professor of microbiology and immunology, and director of the Laboratory of Infectious Diseases at the University of South Alabama College of Medicine, works in his lab. Researchers at the College of Medicine are collaborating with members of the Yale School of Public Health and its West Nile 4K Project to reconstruct a picture of how the virus has spread and adapted.

To better understand the evolution of mosquito-borne viruses, University of South Alabama College of Medicine researchers are collaborating with members of the Yale School of Public Health and its West Nile 4K Project to reconstruct a picture of how the virus has spread and adapted during the past 20 years in the United States.

The West Nile 4K Project is a partnership between West Nile virus surveillance laboratories and academic institutions across the United States. The University of South Alabama is the first academic institution in the state to take part, said Dr. Nate Grubaugh, assistant professor, epidemiology of microbial diseases at the Yale School of Public Health.

Genetic material taken from infected mosquitoes will be sent to Yale to be sequenced, said Dr. Jonathan Rayner, associate professor of microbiology and immunology, and director of the Laboratory of Infectious Diseases at the USA College of Medicine. “They are looking at how the virus has evolved over time by sequencing genomes.”

A genome is an organism's complete set of genetic material, in this case RNA, including all of its genes. Each genome contains all of the information needed to propagate and perpetuate that organism.

“Our goal is to use genomics to understand how outbreaks occur and help design targeted control measures,” said Grubaugh. “For this ambitious goal, we are sequencing thousands of West Nile virus genomes from across the country, and are using the genetic relatedness of the viruses to uncover the spatial and temporal patterns of West Nile outbreaks and spread.”

Mosquito-borne viruses containing an RNA genome are known to mutate quickly, Rayner said, which is why studying how a virus such as West Nile adapts over time is vital in figuring out how to develop vaccines and therapeutics to protect or treat people.

The number of West Nile virus cases rose across the United States in 2018, claiming 167 victims, according to data from the U.S. Centers for Disease Control and Prevention. There were 2,647 cases of West Nile virus in 2018, the CDC said, 550 more cases than the year before.

West Nile virus was first detected in the U.S. in 1999 in New York. Within a few years the virus spread across the nation. Now, West Nile virus is endemic and has become a serious threat to people and animals in America and Europe. While outbreaks have occurred, little progress has been made in controlling them.

The data generated from the West Nile 4K Project — which now includes 48 institutions in 33 states — is being immediately released to the public via the westnile4K.org website, and along with other entomological data, will be used to uncover local transmission dynamics. Analyses and visualizations also are being made publicly available in real-time as data are produced.

For effective targeted control measures to be developed, there is a critical need to explore the diversity of circulating West Nile viruses and how this may influence the emergence of new virus strains that cause disease outbreaks, according to Grubaugh. Some of the questions that researchers hope to answer with this project include how prevalent the spread of West Nile is, if new virus outbreaks are caused by newly introduced viruses or older ones, and if different strains of West Nile have different outbreak potentials.

For more than 18 months, Rayner has been screening locally captured mosquito samples collected by the Mobile County Health Department for other viruses as well, including Eastern equine encephalitis, St. Louis encephalitis, dengue, zika and chikungunya. The insects collected are delivered to the Laboratory for Infectious Disease at USA and positive samples will be used in the West Nile 4K Project.

The idea is to provide direction locally on mosquito control efforts. Yet the ultimate goal of the research performed at USA will be to develop life-saving vaccines and therapeutics. There are currently no licensed human vaccines or therapeutics available to prevent or treat infection with any of these viruses, Rayner said.

Identifying viruses in mosquitoes in Mobile County can be a bit of a catch 22, Rayner said: “In this situation it’s exciting to get a positive scientifically, but then it also means that people are at risk of being infected.”

Most commonly spread through the bite of infected mosquitoes, West Nile Virus infection is typically a seasonal epidemic in the U.S. that begins in late spring or early summer and continues into the fall. Most people infected with West Nile experience no adverse impact, with 1 in 5 developing a fever and other side effects, according to the Centers for Disease Control and Prevention. Serious symptoms can include a high fever, severe headache, nausea, stiff neck, confusion, muscle weakness, paralysis, disorientation and seizures. About 1 in 150 develop a serious or deadly illness such as encephalitis or meningitis.

While most people with the disease recover completely, the elderly and those with compromised immune systems are at higher risk for long-term impacts or death. Although an effective veterinary vaccine against West Nile is available, no human vaccine has been approved for commercial use.