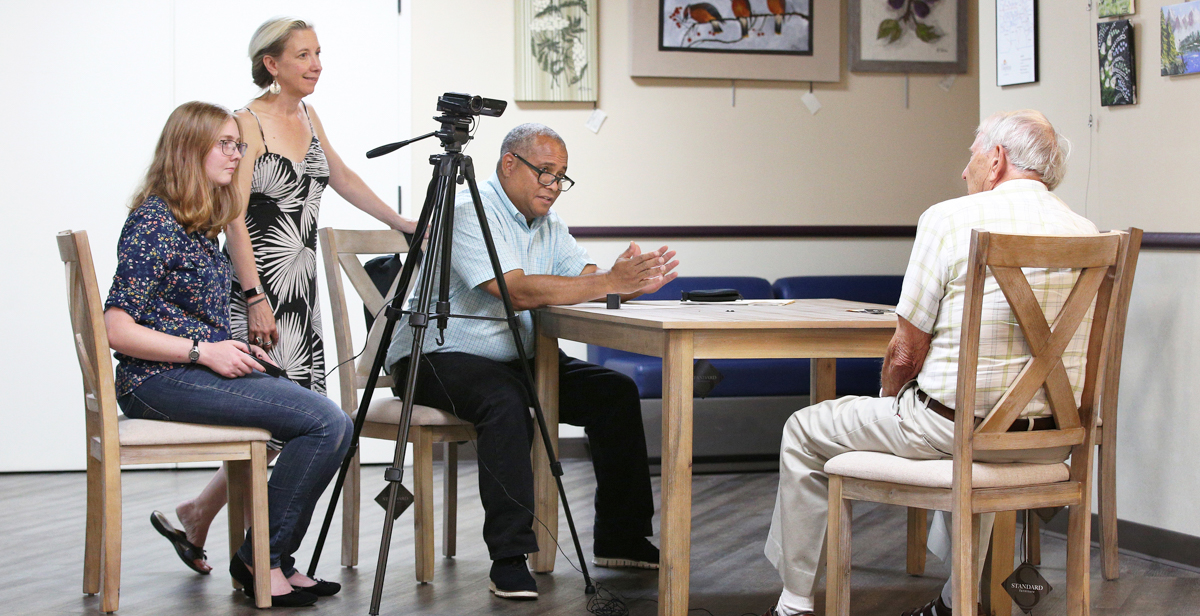 Ruby Bryan, a University of South Alabama student, joined Dr. Kathy Cooke, Honors College dean, and Dr. Kern Jackson, director of the African American Studies Program, for an interview on the Eastern Shore as part of an oral histories program. The interviews will be shared with the public in local library programs early next year.

For an oral history program in the Honors College at the University of South Alabama, Ruby Staten expected to dive into everything from delta history to marine science to estuary conservation.

The snake came as a surprise.

A curious water moccasin interrupted one of her video interviews with a fisherman from Blakeley Bluff.

“I didn’t even see it,” Staten said, laughing. “He’s like, ‘Hold on one second,’ and starts taking off his microphone. Then he got a stick and kind of shooed it away.”

Field interviews are part of the research experience for USA students participating in a pair of oral history projects focused on the Mobile-Tensaw Delta. While just 30 minutes from campus, the delta offers a glimpse into another world.

They learn history that includes the Battle of Fort Blakeley, one of the final engagements of the Civil War, where Northern forces included 5,000 men from the United States Colored Troops. They learn science based on the astonishing diversity of the Mobile floodplain, which biologist E. O. Wilson described as “America’s Amazon.” They learn of the ethnic diversity at Blakeley, north of Spanish Fort near the base of the Delta, where blacks, whites and Native Americans have lived together for decades. 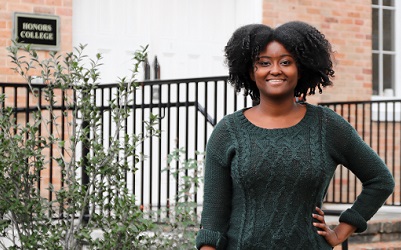 Ruby Staten, a psychology major, is one of the students participating in the USA Honors College oral histories program.

“Their sense of community is very strong,” said Staten, a 21-year-old psychology major from Theodore, Ala. “Every Sunday, they have a big dinner and you’re welcome to come every week. That’s what the Delta is. That’s how these people live.”

“All of these are pilot programs,” Jackson said. “I see it as something larger, coming out of the Honors College, becoming available to other students and being sustained on campus. We’ve had such good results. Hopefully, it’ll be instructive to the University community. You know, if just a little bit of money in the humanities can get all of this? That’s impressive.”

Several South Alabama students traveled to Utah in October for presentations at a national meeting of the Oral History Association. Their Blakeley interviews will be shared with the public in local library programs early next year. Four students will continue with training and research in a Delta Fellows Internship Program, which will pay a stipend of $1,000.

Cooke started work on the oral history program a year ago. It fits her vision for the Honors College. The more she learned about the Mobile Delta, the more she saw it as an ideal resource for interdisciplinary research.

“It’s got history and literature and poetry and art and all kinds of science,” she said. “There’s tourism, engineering — everything you can imagine, all in a small, easily accessible place.”

Jackson, an assistant professor in the USA English department, has been doing oral histories in Mobile for more than 20 years. Now he’s training students to follow in his footsteps.

“It’s funny,” he said, “because the first thing I told them was just mind your manners. Use your Ma’ams and Sirs. Don’t be pushy. In a way, it’s on-the-job training. As they became more comfortable, they could ask questions in a different way or a different order. They could figure out which questions worked and which did not.”

The Honors College has established relationships with Finch Conservation, which is working on a preservation corridor in Alabama, along with Historic Blakeley State Park and the Mobile Creole Cultural and Historical Preservation Society. Interviews with Blakeley residents help fill the gaps with more personal views of trends and change along the bay.

“These people wanted to go down Memory Lane hard,” Jackson said. “They wanted to talk about labels and how they’re misrepresented. You know, ‘I’m not a conservationist, I’m not an environmentalist, I’m just me. And these are the things I care about.’”

Scientists, like Blakeley fishermen, worry that the biodiversity of the Mobile Basin is threatened by industrial and agricultural pollutants moving downstream. In the summer, dead zones appear in Mobile Bay. This is environmental history in the making.

One of the ideas behind the Honors College program is getting students out of the library and into the world surrounding the University of South Alabama.

“This is a form of community engagement, in addition to earning a grade,” Jackson said. “Particularly with our best and brightest, the sooner we can get them off the GPA train, the sooner they can look at ideas and the community, in terms of the footprints they leave behind.

“It’s been nice to see our students being invited back into the community. You know, ‘Come out and have a meal with us.’ All of our field workers have been excellent ambassadors.”

Getting people to talk

Cooke, who is a history professor, has not done much work in oral history. She calls herself a newbie. She marvels at the interview techniques used by those with more experience, such as Jackson, and has witnessed students following his lead.

“There’s a real art to talking to people,” Cooke said. “The main thing is helping people believe they have something you want to hear. And the ability to read people and ask the right follow-up question. Just being willing to pause 30 seconds while they get their thoughts together.”

Staten, the USA psychology major, knew nothing of Blakeley before she joined the oral history team. Her education since then has included a conversation with Vince Dooley, the famous football coach who grew up in Mobile. She learned as she went along.

Staten also spoke with Sue Pie, a Native American community leader who invited her to dinner on the Fourth of July, but declined to sit down for a formal interview. Pie is a fixture at the Blakeley landing on Mobile Bay. Kids call her “Mom.”

Recording a dozen interviews has given Staten some confidence in her oral history skills. She talks about the “magic” of developing a rapport with someone she just met.

As a Delta Fellow, she’ll be going back to Blakeley as a more experienced researcher.

“It’s going to be a more in-depth version of what we’ve already been doing,” she said. “Maybe we can get an interview with Sue.”