'Everything He Did, He Did For His People' 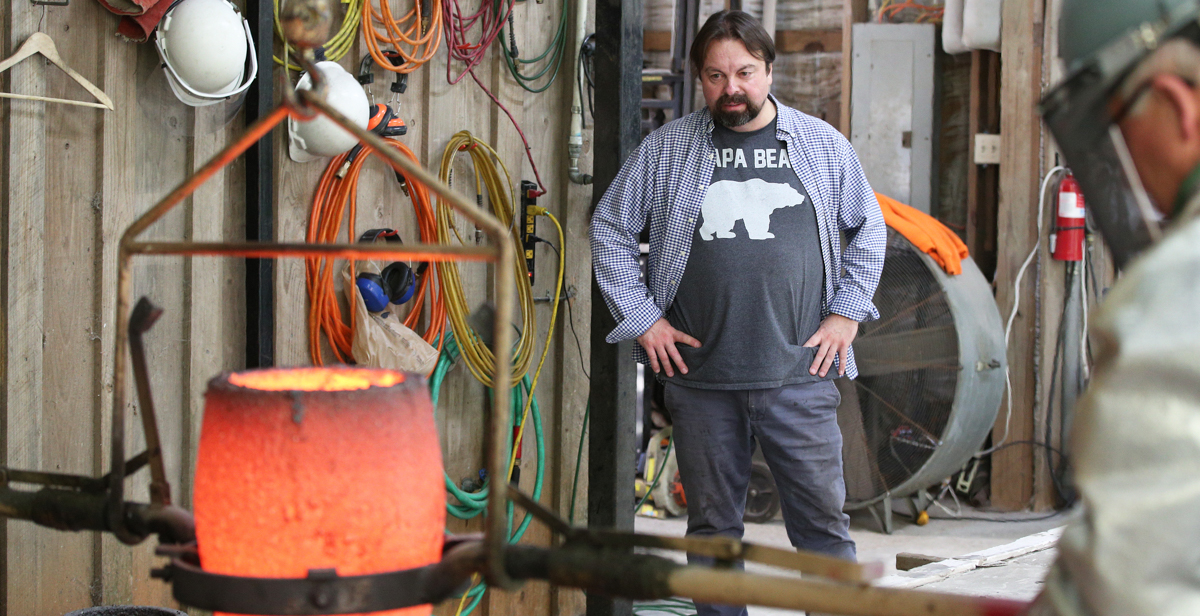 Fernando Guérard, a graduate student at the University of South Alabama, watches as his sculpture of Chief Calvin McGhee is being cast in bronze at the Fairhope Foundry. “This man, his humbleness and his honesty, I really connected with,” Guérard says.

When Fernando Guérard talks about his sculpture of Chief Calvin McGhee — the late Poarch Creek Indians leader who’s become his obsession ­­— he tends to get sidetracked by details of his youth in Spain, or his time running a Fairhope coffee shop, or exactly how a 52-year-old businessman returned to art and became a graduate student at the University of South Alabama.

“It’s a long story,” he said, grinning through a thick beard. “I’m full of long stories.”

Even in his work, Guérard can be wordy, especially for a visual artist.

The wooden bases for his busts often feature laser-cut words and phrases that have meaning for him. The carved headdress for his bronze McGhee sculpture will feature feathers representing things such as “Courage,” “Freedom” and “Respect.” 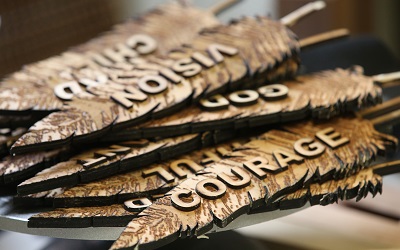 Feathers representing "Courage," "Freedom” and “Respect” were created for the headdress.

His inspiration began with a visit to Kerretv Cuko, the “Building of Learning” at the Poarch Creek Indians Museum and Gift Shop in Atmore. Like so many Alabamians, the artist marveled at the story of McGhee. Somehow a dirt-poor farmer with a fifth-grade education managed to fight and win 20th-century disputes with the state over public education and tribal lands.

“This man, his humbleness and his honesty, I really connected with,” Guérard said. “Then I got obsessed and started going through archives and reading everything I could get my hands on. You know, every time he would go to Washington, members of the tribe would come together to have a chicken fry and everything to pay for the trip. Everything he did, he did for his people.”

He examined historical photos and chose to sculpt McGhee as an older man worn by toil and hardship.

“I wanted his face and neck to look right, with the folds and wrinkles of skin,” Guérard said. “These wrinkles, you know, they’re like a map of his life.”

In the art and art history department at USA, there are many nontraditional students pursuing second careers or graduate degrees. Guérard manages to stand out in a crowd.

“He’s colorful and fun and does great work — all of those things,” said Susan Fitzsimmons, chair of the art department. “He has a very warm personality. People immediately warm to him. That’s terrific.”

She isn’t surprised that words often find a way into his art.

“That’s who Fernando is,” Fitzsimmons said. “There’s a connection there.”

To help pay for sculpting supplies, Guérard applied for and won a $2,000 grant at USA.

Casting work in bronze can be expensive, so he’s also working for Corey Swindle at the Fairhope Foundry on the Eastern Shore. Soon after meeting, they had an arrangement.

“We kind of barter and it benefits both of us,” Swindle said. “He’s helping me and at the same time he’s learning some new things at the foundry. He’s got a great work ethic and some great ideas.”

Swindle laughs when he talks about Guérard’s easy way with people in Fairhope. Once Swindle showed up early for a meeting downtown and sat quietly by himself.

“Then Fernando comes in and he has to make his rounds and talk with everyone in the place,” Swindle said. “People have come to know Fernando. He has a good heart, a good spirit, and that’s seen in his work.”

‘Freedom to express yourself’

Guérard’s father was an American who married a Spanish woman and raised a family in Madrid.

His son went to an Irish boarding school before returning to Spain. Later, he traveled to the United States for college.

“I always felt American,” he said. “I had it in my blood. The freedom to express yourself, the freedom to do anything. Here, I could be myself.” 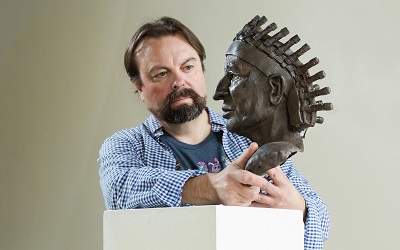 Fernando Guérard with an unfinished cold-cast version of his Chief Calvin McGhee bust.

At the University of South Carolina, he studied international relations for three years. Finally, he changed majors and graduated with a degree in fine art.

“I loved it — loved it,” he said. “I wanted to do everything, from printmaking to sculpture and photography. I got to do a lot of things, experience a lot of things.”

Guérard returned to Spain and worked at different jobs in different businesses. For more than a decade, he was a manager for a marketing company that did displays at trade shows.

Guérard eventually moved to America, and after visiting a cousin in Alabama, he settled into the arts community of Fairhope.

Almost on a whim, he opened a coffee shop called Amore Que Latte.

In 2010, the Mobile Press-Register did a feature on the “half Southerner and half Spaniard” who was charming people at his new business.

“In Fairhope,” the newspaper concluded, “there is no one quite like Fernando Guérard.”

After several years at Amore, he closed shop and started an olive oil importing business. Then he decided to make a more dramatic change and enroll in graduate school.

The timing was tricky. He and his wife, Irina, who is scheduled to graduate from USA this month with a Master of Science in nursing, have three young children. Finally, he decided to make the leap.

“I was a little nervous,” he said. “Art was in my heart, but I’m new in this place, and everyone seemed so young.”

‘Believing in what you do’

Guérard dresses like a student — sneakers, jeans and a flannel shirt — for a long evening in an art department studio. During the summer, he often works at the USA Baldwin County Campus in Fairhope, while his kids ride their bikes through a nearby park.

“Art for me is a lot of patience,” he said. “Believing in what you do. Putting in a lot of time.”

The actual sculpting of a head in clay doesn’t take him that long. The difficult part is deciding on a mood and a message.

“This guy hasn’t spoken to me yet,” Guérard said, waving at a lonely figure on a shelf. “I’ll have to see what he has to say.”

Response to his Chief McGhee sculpture has been enthusiastic. Creek leaders raved when he brought a cold-casting of his piece to Atmore. Now there’s talk of collaborating on a book about tribal art and history.

“I was like, whoa,” he said. “When I walked into the museum, everyone was so excited to see it, and that was the best reward I could get.”

Guérard isn’t exactly sure where his Creek work will lead. He is halfway through a three-year graduate program at USA and still needs to complete a master’s thesis. With his art experience and people skills, Guérard thinks he might be good at teaching.

“I think I can help people express themselves in art,” he said. “But you never know what’s going to happen. That’s the beauty of it.”