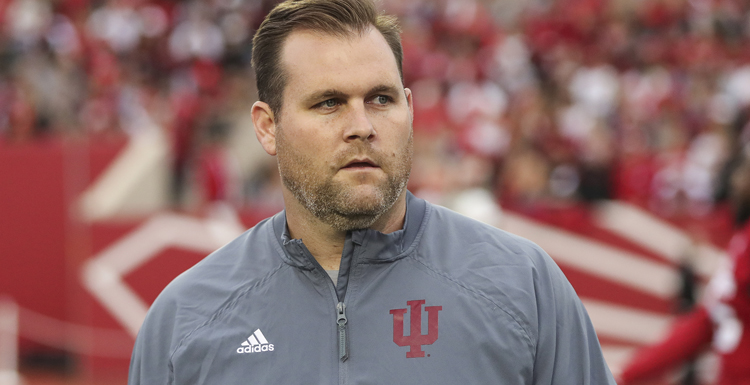 Kane Wommack is a finalist for the Broyles award given annually to the nation's top assistant coach and at 33, becomes the youngest head coach on the FBS level.

A candidate for the award given to the top NCAA Football Bowl Subdivision assistant coach, Kane Wommack has been named the head football coach at the University of South Alabama.

Jaguar Director of Athletics Joel Erdmann made the announcement Saturday.  Wommack (pronounced WAH-mick), 33, becomes the third head coach since the inception of South’s program and the youngest at the NCAA FBS level.

“To be the head coach at the University of South Alabama is the opportunity of a lifetime!  Melissa and I could not be more excited to return to a city that we love,” said Wommack.  “Believing in all that this community has to offer, we proudly join a team of exceptional leaders in steering the Jaguar football program to reach its greatest potential.  My staff and I will lead the Jaguars with a respect that honors those who have built this program; relational coaching that transforms the lives of our student-athletes; and, a contagious intensity that ignites and expands our great fan base.  Our best is yet to come, GO JAGS!”

“We are extremely excited to have Kane as the new leader for our football program,” Erdmann said.  “We conducted a national search that included many tremendous participants, and at the end of that process it became obvious to me who is the best fit for us at this point in time and as we look to the future.”

Wommack, who is in his third season as linebackers coach and second as the defensive coordinator at Indiana, is a candidate for the Broyles Award after helping the Hoosiers lead the Big Ten Conference and the country in both interceptions (17) and red zone defense (57.9%).  IU — currently 6-1 and ranked eighth in this week’s Associated Press poll — also tops the league with 20 takeaways, a plus-1.43 turnover ratio and 3.29 sacks per contest while standing among the top 20 nationally in passing efficiency (115.67 rating) and scoring (19.4 points per game) defense as well.

In his first year as the youngest Power 5 defensive coordinator, Wommack led IU to top-50 rankings nationally in scoring, total, rush and pass defense for the first time since 1993.  His efforts helped the Hoosiers hold four opponents to three points or less, the most in one season since limiting five to three or fewer in 1945.

Wommack was the Jaguars’ defensive coordinator and linebackers coach during the 2016 and ’17 campaigns, leading a unit that was among the top 10 in the country in passing defense (174.6 ypg) while allowing over 10 points fewer than the previous season — the fifth-best improvement in the NCAA FBS that fall — his first year on the staff.  In 2017, South was in the top 15 nationally in both red zone defense and fumble recoveries as the Jags recorded 20 takeaways both seasons he was in charge of the defense.

Under his direction, Jeremy Reaves — currently with the Washington Football Team in the National Football League — was a two-time first-team all-Sun Belt Conference selection and the program’s first-ever individual to receive an individual award from the league after being named the Defensive Player of the Year in 2017.  After ranking in the top 10 in the nation in both sacks and tackles for loss in 2016, Randy Allen was voted first-team all-Sun Belt while linebackers Bull Barge, Roman Buchanan, Kalen Jackson and Darrell Songy each earned all-league accolades during Wommack’s two years at South.

Prior to his arrival at South, Wommack was the defensive coordinator and safeties coach at Eastern Illinois, where he helped the Panthers make a first-round appearance in the NCAA Division I Football Championship Subdivision playoffs while finishing in the top 25 of the final national poll in 2015.  That fall, EIU’s defense ranked second nationally in interceptions (19), third in takeaways (31), fourth in pass efficiency defense (103.0), eighth in red zone defense (67.3%) and 10th in tackles for loss (98) while Dino Fanti was named the 2015 Ohio Valley Conference co-Defensive Player of the Year.  In his first year with the program, the Panthers ranked second in the league in scoring defense and fourth in takeaways as four members of the unit earned all-OVC honors.

Wommack also has experience having worked at Tennessee-Martin in 2010, Jacksonville State in ’11 — where he helped the Gamecocks claim a share of the OVC championship — and Ole Miss during the 2012 and ’13 seasons.

He began his collegiate playing career at Arkansas, where he was a fullback in 2005 and ‘06, helping the Razorbacks win the Southeastern Conference West Division title his second year.  After transferring to Southern Mississippi, Wommack helped the Golden Eagles to three straight bowl appearances before earning his undergraduate degree in political science in 2009; he began his coaching career as a volunteer assistant while at the school.

Wommack and his wife Melissa have three sons: Asher, Tatum and Jones.  His father, Dave, had more than 35 years of experience coaching at the collegiate level, including serving as defensive coordinator at Ole Miss before retiring following the 2016 season.