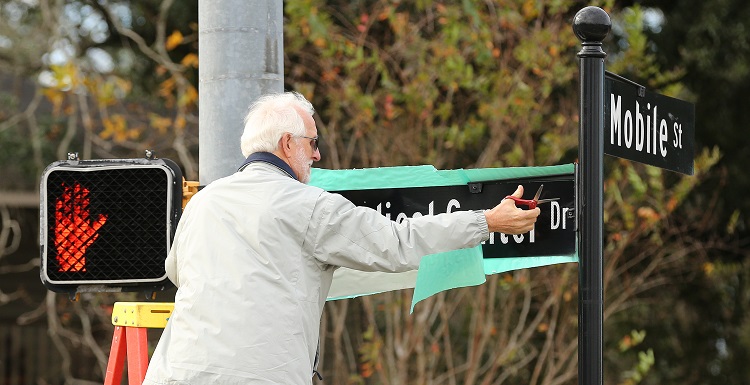 Elmer Sellers, retired USA Medical Center assistant administrator, unveils the new USA Medical Center sign at Mobile Street. The hospital houses the region's only Level I trauma center and has one of the busiest burn units in the country.

The University of South Alabama Medical Center is now located on USA Medical Center Drive, following a recent vote by Mobile City Council members to rename a portion of Fillingim Street that leads to the acute care teaching hospital.

City of Mobile council members offered a second nod to the area’s only Level 1 trauma center this month by renaming a section of Mobile Street as Honorary USA Medical Center Drive, marking a continuous path to the medical center from Springhill Avenue. Both name changes were announced during a Dec. 8, 2016 ceremony near USA Medical Center where Councilman Fred Richardson paid tribute to the leadership of USA Medical Center Administrator Beth Anderson.

USA Medical Center has served for years as the region’s only Level 1 trauma center, and includes one of the nation’s busiest burn units, the Arnold Luterman Regional Burn Center.  More than one third of the area’s physicians have received medical training at the hospital that cares for the region’s most critically ill patients.

“For many years, the Medical Center family has joined with neighboring residents, USA students and volunteers on Saturday mornings to keep our corner of the city clear of trash, debris and overgrown landscapes,” Anderson said during the street naming ceremony. “Thanks to the efforts of Councilman Richardson and his colleagues on the City Council, USA Medical Center’s significant contributions to this community by offering services unique to the region and needed medical care to residents is being recognized with the renaming of the street that thousands of patients travel each year in hopes of leading longer, better lives.”

Anderson said the renaming effort was years in the making, and began with the vision and leadership of Elmer Sellers, a retired assistant administrator at USA Medical Center. Later, Warren Greene, Anderson’s current assistant, moved the beautification campaign forward. “Warren expanded the scope of the project and helped to build enthusiasm and support for the initiative.” Greene and Sellers unveiled the new sign together as more than 50 others looked on.

In recent years, USA Medical Center leaders have partnered with elected officials from the city and county, including Merceria Ludgood, to make the entrance to the Crichton community more attractive by widening the street for better access and creating new landscaping, sidewalks, lights and banners.