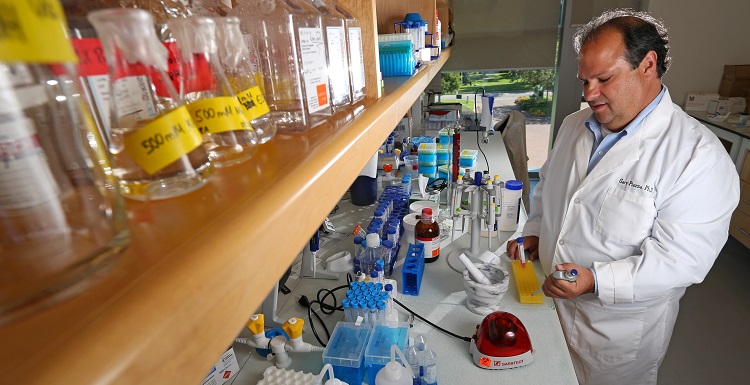 Dr. Gary A. Piazza, professor of pharmacology and oncologic sciences at USA Mitchell Cancer Institute, will be inducted as a NAI Fellow on April 6, 2017, at the Sixth Annual Conference of the NAI in Boston.

Dr. Gary A. Piazza, professor of pharmacology and oncologic sciences at USA Mitchell Cancer Institute, has been named an NAI Fellow by the National Academy of Inventors, one of 175 members of the 2016 class and the first ever from the University of South Alabama.

NAI Fellow status is the highest professional distinction accorded solely to academic inventors and is based upon a nominee’s patent portfolio. There are a total of 757 Fellows representing 229 research universities, and governmental and nonprofit research institutes. Among them are inductees of the National Inventors Hall of Fame, Nobel Laureates, and recipients of the U.S. National Medal of Technology and Innovation, and U.S. National Medal of Science.

“While it is rewarding to have my contributions recognized by the National Academy of Inventors, I am especially honored to represent the University of South Alabama and Mitchell Cancer Institute by accepting this prestigious award,” Piazza said.

Piazza holds more than 70 issued or pending patents that have been licensed or assigned to multiple companies and universities, including ADT Pharmaceuticals Inc., a company he co-founded with the mission of anti-cancer development therapeutics. Piazza came to MCI in 2011 from the Southern Research Institute and is a graduate of the University of Alabama at Birmingham, with postdoctoral training from Fox Chase Cancer Center and Brown University.

Piazza’s most recent patent applications involve novel inhibitors of the RAS oncoprotein, which is considered a culprit in the most aggressive cancers that are resistant to radiation and chemotherapy. These inhibitors are currently in the pre-clinical drug development stage, and hold promise for the treatment of pancreatic, lung and colorectal cancers.

Piazza has published more than 100 peer-reviewed scientific articles and has served on the editorial board of Molecular Cancer Therapeutics. He has received numerous grant awards from the National Cancer Institute that have funded his research since 2004.

He has also served as a scientific reviewer in multiple study sections for the U.S. Department of Defense, Veterans Administration and National Cancer Institute, including the review of small business grant applications. He has been a member of the American Association for Cancer Research since 1996.

Piazza will be inducted as a Fellow on April 6, 2017, at the Sixth Annual Conference of the NAI in Boston.