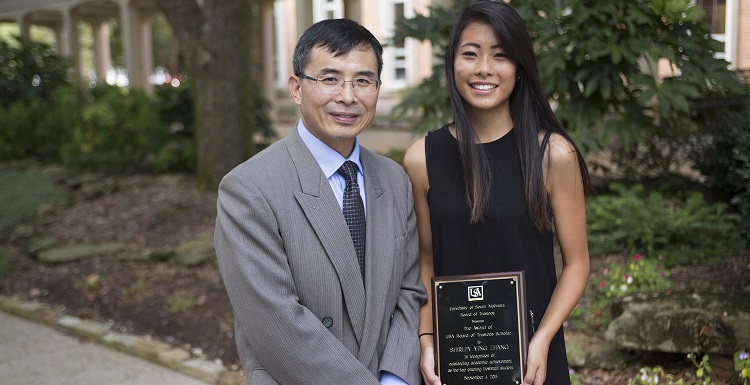 University of South Alabama freshman Shirley Zhang of Vestavia Hills, Ala., has been named the USA Board of Trustees Scholar for the 2015-2016 academic year.  The announcement was made at the University’s Board of Trustees meeting on Friday, Sept. 4, where Zhang was recognized by Chair Pro Tempore Dr. Steven Furr and other board members.

The USA Board of Trustees Scholarship program was created last year to recognize the most academically talented student in each incoming freshman class. Each recipient is awarded a financial scholarship as a supplement to other scholarships or awards.  The 2014-2015 recipient, Jeffrey Hamilton of Foley, is currently a sophomore majoring in mathematics/statistics and minoring in economics.  Hamilton also attended today’s meeting.

Zhang, with an ACT score of 35, has been admitted into the University’s Honors Program, which is designed to help exceptionally capable and motivated students get the most out of their USA experience.

At Vestavia Hills High School, where she had a perfect 4.0 grade-point average, Zhang was a member of the math team, soccer team, debate club and amnesty club.  She has yet to declare a major but is most interested in pursuing a degree in the biomedical field.  “I’m looking forward to getting involved with the community and on campus at South Alabama,” Zhang said.

The scholarship was created last year after the trustees gave the University more than $125,000, which was matched by the Mitchell-Moulton Scholarship Initiative, to create the USA Board of Trustees Scholarship.  It carries the highest honor of any scholarship available at South Alabama.

Once the program is completely phased in, there will be four USA Board of Trustees Scholars at any one time, representing each class of undergraduate students. The selection is based on ACT/SAT score, and, if needed, GPA on a 4.0 scale followed by rigor of high school coursework.