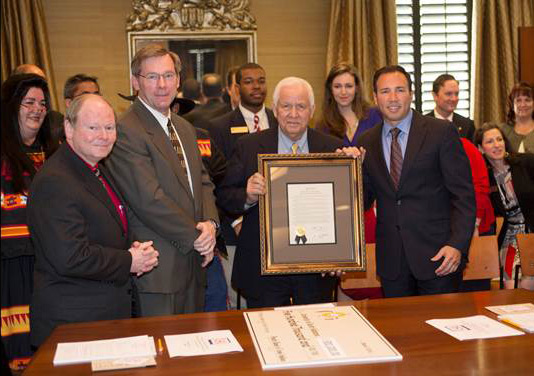 The University of South Alabama and the Poarch Band of Creek Indians have announced the creation of a Native American studies program that will focus on the history, culture and modern life of the Tribe, along with others in the Southeast and across the United States.

The Poarch Band of Creek Indians Native American Studies Program will be funded, in part, by a $500,000 gift from the Escambia County, Ala., Tribe.

“We are thrilled to make this opportunity available to USA students so they will be able to further their education in Native American studies,” said Buford L. Rolin, tribal chairman of the Poarch Band of Creek Indians. “The Tribal Council realizes how important quality education is, and for students to have the opportunity to learn about our history and culture at the University of South Alabama will only enhance the current studies being offered by the University.”

“This gift represents a substantial investment in the preservation of Native American heritage and culture,” said Dr. Joseph F. Busta Jr., USA vice president for development and alumni relations. “Together we are celebrating a historic step in a relationship that will improve the community’s knowledge of the important contributions the Poarch have made to this state’s history and culture, and enrich the education of generations of students at South Alabama. We are proud that the Poarch Band’s tribal leaders have chosen us as partners in this important effort.”

The philanthropic support will provide funding to the USA College of Arts and Sciences for an endowed professorship and program support. Among other activities, the University will:

Of the gift, $400,000 will fund the endowed professorship, which will support scholarly and community outreach activities in perpetuity. The University has committed $75,000 annually in perpetuity.

The Poarch Creek Indians are descendants of a segment of the original Creek Nation, which once covered almost all of Alabama and Georgia. Unlike many eastern Indian tribes, the Poarch Creeks were not removed from their tribal lands and have lived together for almost 200 years in and around the reservation in Poarch, Ala. The reservation is located eight miles northwest of Atmore in rural Escambia County and 57 miles northeast of Mobile.

The Poarch Band of Creek Indians is the only federally recognized Indian tribe in the state of Alabama, operating as a sovereign nation with its own system of government and bylaws. The Tribe operates a variety of economic enterprises, which employ hundreds of area residents. Poarch Creek Indian Gaming manages three gaming facilities in Alabama, including: Wind Creek Hotel & Casino in Atmore; Wind Creek Wetumpka in Wetumpka; and Tallapoosa Casino in Montgomery. The Poarch Band of Creek Indians is an active partner in the state of Alabama, contributing to economic, educational, social and cultural projects benefiting both tribal members and residents of these local communities and neighboring towns.

Robert McGhee, the Poarch Band of Creek Indians’ government relations adviser and a 1993 graduate of USA in anthropology, said the partnership with the University would have special meaning to his grandfather, Chief Calvin McGhee, who led the Tribe for two decades until his death in 1970.

“My great grandfather valued his Indian history and culture. He stayed true to his roots and his identity, even during years when it was not always easy to be an Indian,” McGhee said. “He would be so happy to know that students here will have the opportunity to learn that our history is also part of their state's history and important to everyone who calls Alabama home. I know he would view today as a landmark event and a great honor.”