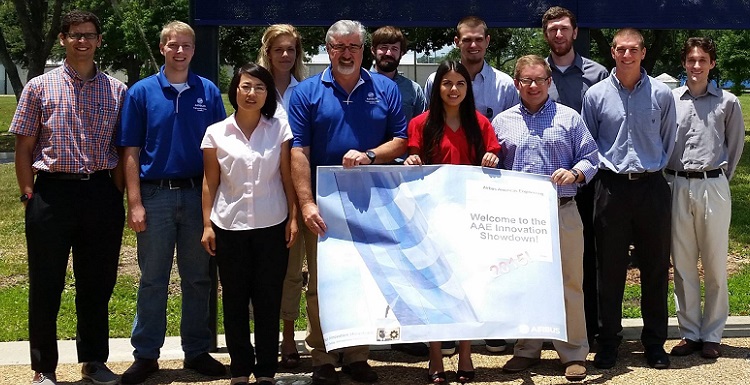 When a new generation of aircraft takes to the skies, it could be that University of South Alabama students will have played a major role in their creation. A team of University students recently won the first Airbus Innovation Showdown, a national competition among college students to help Airbus create the “Aircraft of the Future.”

The winning South Alabama team of seniors Micah Calhoun, an economics and finance major from Mobile; Brandi DePineuil, a mechanical engineering major from Ocean Springs, Miss., Dan Smithson, an electrical engineering major from Wetumpka, Ala., and Andrew Tindell, a mechanical engineering major from Pensacola, Fla., which focused on aircraft systems, was selected based on a “much more proactive market outreach and pressure testing of their ideas with key stakeholders,” said Joachim Hehemann, director of integration at Airbus, and Ronald Jonash, director and senior partner at IXL Center, which coordinated the event. Another team of USA students, who concentrated on cabin design, finished in second place in the competition.

The IXL Center will award $1,250 to each member of the winning USA team.  University Vice President for Research and Economic Development Lynne Chronister said the experience for the students is priceless. “We are exceptionally proud of both of the two interdisciplinary teams of USA students that competed in the Showdown and both teams learned invaluable lessons and experience,” Chronister said

Dr. Carlos Montalvo, assistant professor of mechanical engineering, acted as the primary faculty mentor for the USA students. “I am very pleased with our South Alabama teams, as they showed excellent presentation skills and creativity,” Montalvo said.  “I am optimistic that this will lead to future collaboration with South Alabama and Airbus, and it will undoubtedly propel each student's career above and beyond their competition.  I am excited to see what the future holds for our students and for Airbus Innovations.”

The competition was the first of its kind sponsored by Airbus Americas, which aims to gain valuable, innovative ideas for the aircraft of the future, grow potential future partnerships and identify key suppliers who could become valuable partners in the long run.

Students collaborated to develop small idea fragments that could be put together to form better, stronger ideas. The project was developed jointly between Airbus Research & Technology and cabin engineering across nearly all Airbus locations with support from Airbus Corporate Innovation. The Innovation Showdown gave students the chance to learn about the field, expand their interest in commercial aircraft manufacturing, and generate out-of-the-box, innovative ideas for aircraft of the future.