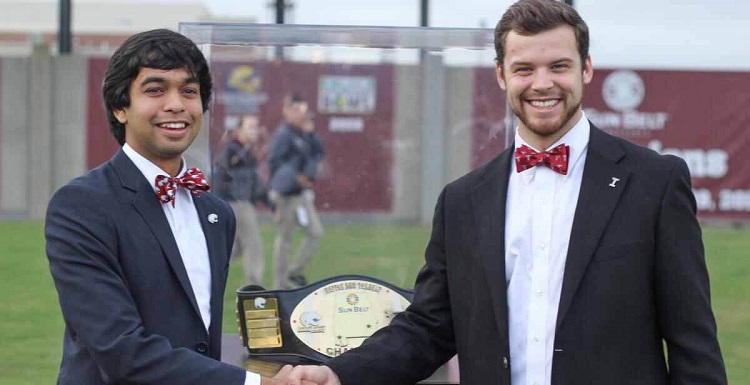 USA SGA President Ravi Rajendra is seen with Troy University SGA President Heath Barton as Rajendra prepares to present the “Battle for the Belt” trophy to the Jaguar football team.

The University of South Alabama vs. Troy University football game turned out to be more than just a rivalry match. It was an opportunity for students to join a state-wide service project and make a difference

“There are children in Alabama who need books,” said Ravi Rajendra, president of the USA Student Government Association. “This game gave our students the opportunity to do something about it.”

Students at the University recently joined college students from across the state to collect books for a bookstore under construction in Greensboro, Ala. A variety of books for both children and adults were collected. The USA Student Government Association’s “Book Your Ride to Troy” book drive collected 1,456 books.

This initiative was done in conjunction with the Troy rivalry week, which was held last week prior to the USA-Troy football game. Students were asked to bring in five books of any type, and the first 100 students to bring in the books received a free bus ride to the game, a Jim-‘N-Nicks tailgate pass, a #BeatTroy T-shirt and a ticket to the game. Each of the second 100 students who donated the five books won a #BeatTroy T-shirt.

“Book Your Ride to Troy” was a collaboration of a statewide service project spearheaded by the University Student Presidents’ Council of the Higher Education Partnership of Alabama. For the book drive, the University Student Presidents’ Council, which represents the students of Alabama's 14 public universities, partnered with HERO, a catalyst for community development to end rural poverty in Alabama's Black Belt region. As a non-profit, HERO provides economic development, community resources, housing education and affordable housing construction. When funding is available they also provide youth programming.

“'Book your Ride to Troy’” was a service project based on school pride, and it shows  just how much Jags love South, and how much Jags care about improving this great state of Alabama that we all call home,” Rajendra said. “With the book drive, I knew regardless of what happened on the football field we were winners.”

Rajendra said the rivalry game was named the “Battle for the Belt,” playing off of the Sun Belt Conference name.

“Just as belts support us in everyday life, the belt trophy metaphorically supports and represents the great traditions that take place every day at both South and Troy,” he explained. “We are so excited that ESPN’s College Football Live did a segment about the trophy.”

“After the win, I assisted Troy’s SGA President Heath Barton with unveiling the 'Battle for the Belt' trophy and presented it to our Jaguar football team,” Rajendra said. “However, the big highlight was to join with students from other universities and collect these books for a great cause. We are grateful to everyone who donated.”