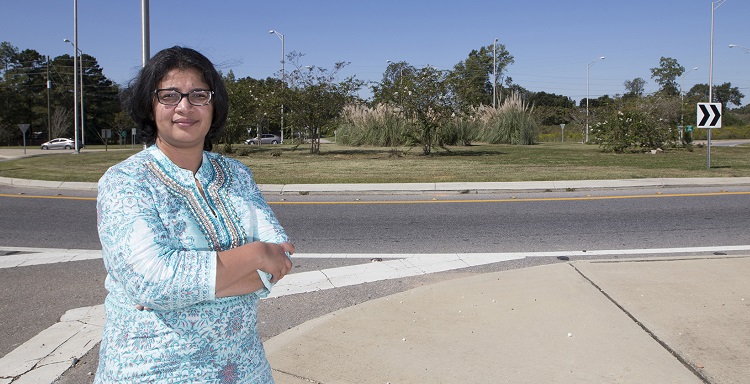 Dr. Samantha Islam, an associate engineering professor, has worked with the Alabama Department of Transportation to develop statewide operations guidelines on roundabouts. She estimates there are about a dozen under way.

Like them or not, roundabouts are coming to a troublesome intersection near you.

There’s one in west Mobile at the intersection of Grelot Road, Dawes Road and Air Terminal Drive, and there are more under or planned for construction in and around Mobile; for example, one on McGregor Avenue near Dauphin Street.

Samantha Islam likes roundabouts. She’s a civil engineering associate professor who specializes in transportation engineering, and she says they help.

“If you have congestion issues, such as those that existed on Dawes Road at Grelot, they’re a very good technique to move traffic more quickly at a lower speed with less congestion and less delay,” said Islam, who earned her doctorate in civil engineering at Purdue University. She also acknowledges that slowing down is something drivers don’t necessarily like to do.

“One of the biggest adjustments for drivers is getting accustomed to yielding instead of stopping,” she added.  That means driving more slowly.  “The roundabouts promote and provide continuous flow of traffic at lower speeds, and thereby significantly improve safety by reducing severity and frequency of overall crashes,” she said.

Islam consulted with Mobile County engineers as they constructed the Dawes/Grelot/Air Terminal roundabout. She’s also worked with the Alabama Department of Transportation to develop statewide operations guidelines on roundabouts. Islam estimates there are about a dozen roundabouts under way in the entire state, so her input will go a long way in creating the new generation of roundabouts in Alabama.

Next time you and your friends are talking about roundabouts, impress them with these facts: