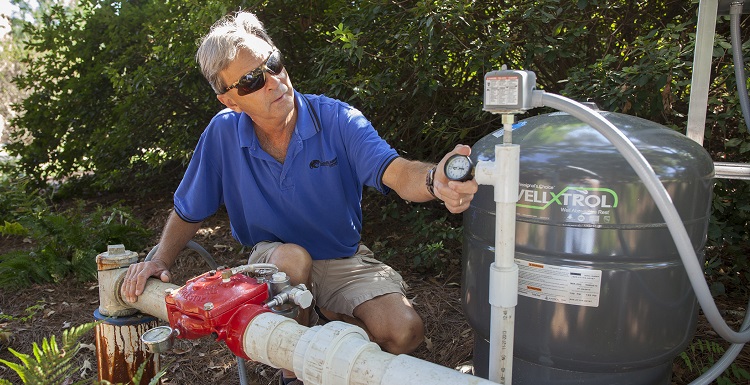 Landscaping Manager Gary Carley checks the campus wells daily. Carley and his employees use the wells for irrigation purposes, such as watering grass and flowers, but the well water is also used in the generation of the chilled water used to cool the campus buildings.

When Randy Moon first started figuring the savings that a more efficient campus energy system could provide, he got excited … and a little nervous.

“I told my boss a couple of years ago we might save as much as $350,000 a year,” said Moon, the University’s assistant vice president for facilities management.  “I thought I might be conservative, but I also thought that if I was wrong, this might be the end of my career.”

Moon laughs when recalling that, because he was wrong, but in the right way.  Instead of saving $350,000, the annual cost savings last year was $730,000.  Some of the energy savings come where you would expect it – for instance, replacing outdated equipment with energy-efficient machines – but he also looked for savings in unusual places.  Wells, for instance.

“The University had some wells on campus, but they were only being used for irrigation purposes, like watering grass and flowers,” he said.  “I wondered, with sandy soil that’s easy to drill through and abundant water below ground, that maybe we weren’t using our location to the fullest advantage.”

So about a year ago, the University started drilling more wells.  They found water, and plenty of it.  Moon did not have greener grass on his mind.

“We needed a lot of water because we use water to generate the heating and cooling of our buildings, and we were buying that water from the Mobile Area Water and Sewer System,” he said.  “What we found was so much water that we didn’t have to buy nearly as much from MAWSS.”  USA still buys domestic, or treated, water – used for drinking, washing clothes, food preparation, etc. – from the city, but the annual savings from using well water was more than $135,000 just last year.

From an environmental standpoint, it’s also a win.  “We’re now using less electricity, so that reduces our carbon footprint,” Moon said.  “And by not purchasing 154 million gallons of water annually from MAWSS, the city can redirect that resource elsewhere in Mobile.”

Students, faculty and staff may have noticed some buildings are more comfortable this year because more of them are tied directly to the new equipment at USA’s central plant, rather than connected to their own, inefficient equipment outside their own building.  This is progress, but it does have some temporary side effects.

“We know that it’s an inconvenience to our students and employees whenever we have to dig up a street in order to upgrade the system, and we are very aware that folks occasionally have to detour from their usual routes,” he said.

As the University continues to grow in popularity, the demands for energy are increasing, too.  “We are a growing university,” said Moon, “and we are also becoming more complex.  Our lab buildings, for instance, require 100 percent outside air makeup with no recirculated air conditioning.  This requires substantially more energy than a standard classroom building; therefore, there is a constant need to maintain and calibrate the building automation controls to conserve energy costs as much as possible.”

And the financial reality can’t be ignored, either.  As state funding continues to shrink relative to the size and scope of the University, dollars become even more precious.  If hundreds of thousands of dollars in energy and water costs can be saved every year, that’s an investment Moon says you want to make.

“The investments we began making just a few years ago are already paying for themselves,” said Moon.  “I don’t think we’ll ever stop looking for ways to be more efficient, use less energy and spend less money, and if we can do that and reliably provide the University’s energy and water needs now and in the future, well, that’s something to feel good about.”