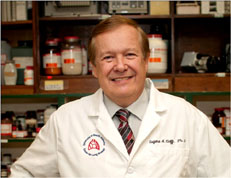 The study of carbohydrates within biological systems has illustrated that are involved in key biological functions such as cell-cell, cell-matrix, and cell-molecule interactions critical to the development and function of a complex multi-cellular organism. These glycans act as mediators in the interactions between different organisms (e.g., between a host and pathogen), and their high intra- and surficial cellular abundance denotes their key roles as recognition and regulatory molecular switches. An increasingly diverse and complete paradigm of molecular biology thus includes the glycans and covalently-linked glycoconjugates, in the context of proteoglycans, glycoproteins, and glycolipids. Our research studies are focused on two projects which involve glycochemistry and glycobiology. These projects are as follows:

A) Critical glycoconjugate interactions in the pulmonary vasculature.

B) Synthetic glycodendrimers for MRI enhancement and chemotherapeutic applications in oncology.

A common property of invasive primary and metastatic cancers is upregulation of glycolysis, with concomitant increased glucose consumption. Presumably, this constitutive upregulation of glycolysis is required for the vascular angiogenesis associated with the tumor growth. It has been widely reported that all invasive cancers avidly trap 2-18F-deoxyglucose (FdG), which is the most widely used PET imaging agent. FdG PET imaging affords quantitation of glucose uptake, and consistently correlates poor prognosis and increased tumor aggressiveness with increased glucose uptake. However, since the 18F- radionuclide is short-lived and emits both beta and gamma radiation [T½ = 1.8 hr.; β = 634keV; γ = 511 keV; (www.nchps.org)], both the medical staff and patient must be especially cautious in the use of FdG. But the avidity for glucose uptake by cancerous tissue can be exploited in a different way, using non-hydrolysable glucose-tethered dendrimers affixed to naturally abundant hydroxy-keto heterocycles which strongly and irreversibly bind M+2 and M+3 transition metals. Our prior work using isothermal titration calorimetry (ITC) has demonstrated that keto-hydroxy heterocycles show very strong binding to M+2 and M+3 transition metals. Furthermore, the parent O- or N- heterocycle itself may be "tuned" for enhanced binding to a specific metal by simple chemical modification (e.g., for Gd+3, the binding constant Ka (M-1) increased from 1.4 x 104 to 8.9 x 105 by a single ring-atom O → N substitution). The utility of non-radioactive nuclei such as Gd+3 as an MRI imaging agent (e.g., Gadovist® and Magnevist®) in clinical practice is well documented; however, anaphylactoid reactions may occur in patients with an allergic deposition to the macrocyclic azatetra-cyclododecane-triacetic acid tether, and is similarly contraindicated with patients with kidney insufficiency. Further, imaging and chemotherapeutic applications with "hot" isotopes such as 64Cu-ATSM [T½ = 12.7 hr.; β = 587 keV; positron = 653 keV; γ = 135 keV] and 67Ga [T½ = 3.3 days; γ = 185 keV] require direct tethering ligands [64Cu] or co-complexed ligands [67Ga] that may not readily select between target and non-target tissue, or is contraindicated by existing physiological conditions. The development of non-hydrolysable glucose-tethered heterocyclic dendrimers is a new unexplored class of agents, which take fully advantage of glucose avidity by a tumor. These custom-designed glycodendrimers show great potential for both MRI and radioimaging applications, and with sufficient development could become a central modality for both selective imaging and nuclear radiotherapy.