Donate canned goods for the second annual Jaguars Canned Food Drive this Thursday at the USA vs. Troy football game! 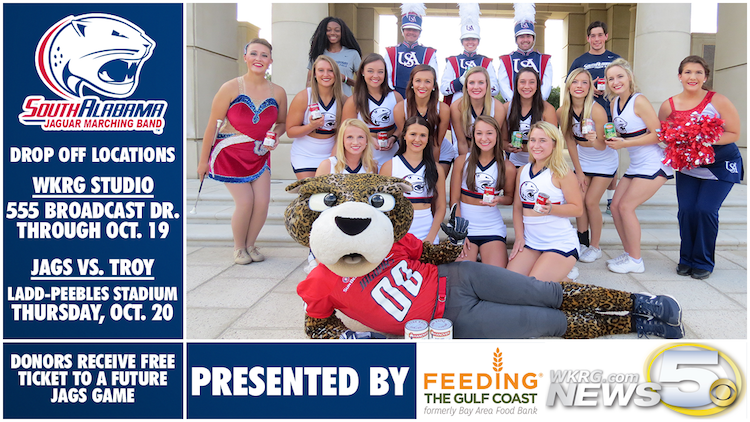 The University of South Alabama Jaguar Marching Band has teamed up with Jaguar Athletics, WKRG News 5 and Feeding the Gulf Coast to present the second annual Jaguars Canned Food Drive. Bring a canned food donation to the USA vs. Troy Football game this Thursday, October 20th and receive a voucher for four complimentary general admission tickets to South’s final home football game of the year vs. New Mexico State on Saturday, December 3rd!

Drop-off locations will be at all entry gates to Ladd Peebles Stadium.  Look for the Greer’s shopping carts and members of the Jaguar Marching Band at the entry gates.  We are looking for “one can from every fan!” but we would love to see even more donations!  Cans will be accepted from the opening of gates at 4:30PM until the conclusion of the first quarter.

In addition, you can drop off cans at the WKRG Studio at 555 Broadcast Drive through October 19th. Cans will also be accepted on-campus on Friday, October 21st at the Jaguar Marching Band Rehearsal Field next to the USA Mitchell Center from 9:00AM-5:00PM.  We encourage USA students, faculty, and staff to donate!

All donations from the Jaguars Canned Food Drive will be personally delivered to Feeding the Gulf Coast, formerly the Bay Area Food Bank. Let’s help those that are in need as we head into the Holidays!  With your help, we CAN make a difference!