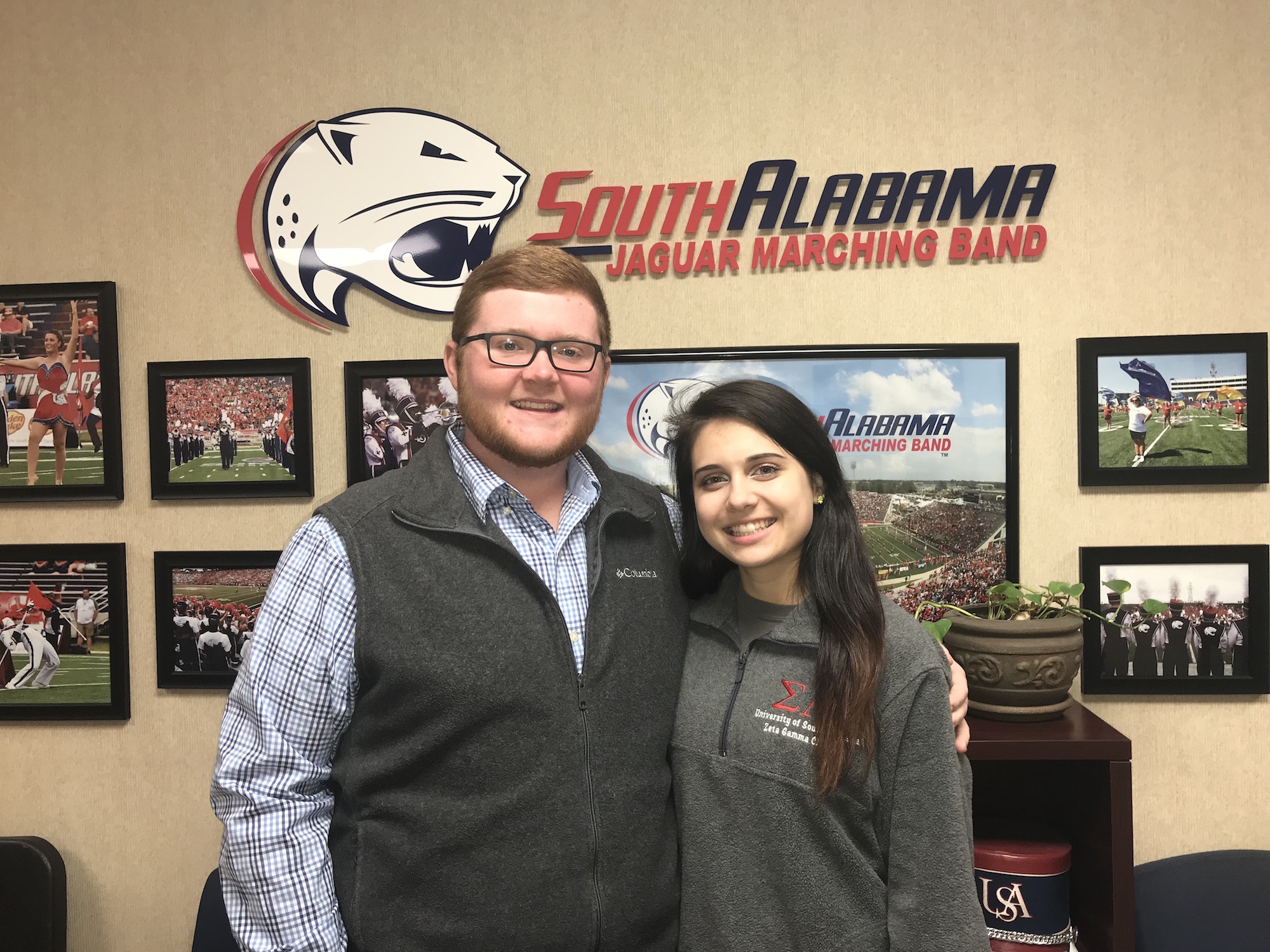 After the culmination of a search beginning in the fall of 2017, the Jaguar Marching Band is pleased to announce the selection of their new drum majors for the 2018-2019 season.  In a first for the JMB, two drum majors have been selected, a Head Drum Major and an Assistant Drum Major!  We are pleased to welcome Alexandra Linton, a junior clarinet majoring in Biology from Gulf Shores as our Head Drum Major and Jonah Hadaway, a freshman trumpet majoring Radiologic Sciences from Bessemer as our Assistant Drum Major.  Their duties will begin officially at the Red vs. Blue Spring Game on Saturday, April 14th at Ladd Peebles Stadium.  Linton and Hadaway will succeed outgoing three-year Drum Major Carson Watson of Prattville who will begin graduate studies in the Physician Assistant program at the University of South Alabama this fall.

Linton is “thrilled to take on the role” and remarked on the importance of the Drum Major position stating “not only does the Drum Major lead the members during field shows and in the stands, they also serve as a leader and an ambassador for the JMB and the University. The Drum Major leads by example and sets a standard for other members on how to best achieve their goals as a band member and as a student.”  Hadaway added that “it is a huge honor to have been selected as the Assistant Drum Major!  I am excited to see what new and challenging aspects are brought to the program this year, and I am thrilled knowing that Alex and I will contribute to it.”

Reflecting on what has been the most exciting part of being a member of the Jaguar Marching Band, Hadaway commented on the “amazing people I meet and the family that I am able to call my own.” Linton remarked that “the best thing the JMB has brought me has been friendships – I have made some of the best friends I have ever had through this organization.  This, along with the fact that I get to experience all the fun and excellence the JMB has to offer, leads to what has been an incredibly exciting undergraduate career thus far.” Linton added that “ I cannot wait to experience this new chapter of being Drum Major with Jonah - another great friend the JMB has brought me.”

The new Drum Majors are hitting the ground running and are already thinking about how they want to make their mark on the Jaguar Marching Band.  “My goal is to further that relationship and create a greater bond between JMB members as a whole” Hadaway remarked.  “Secondly, I want to help ensure that every member makes the most of their time on the field and strives to be the best they can be.” Linton is aiming to strengthen connections with all the members of the band and continue to create a fun musical experience. “Not only do I want to have fun, I want all other members to have fun. We all joined this organization because we share a common goal, to make music and support the University of South Alabama. Working towards this goal with 250 other student-musicians makes for such a fun experience, and I cannot wait to witness it from the perspective of Drum Major.”

Look for these two new leaders of the Jaguar Marching Band at the Red vs. Blue Spring Game on Saturday, April 14th and in the fall as the Jags take the field under new Head Coach, Steve Campbell!