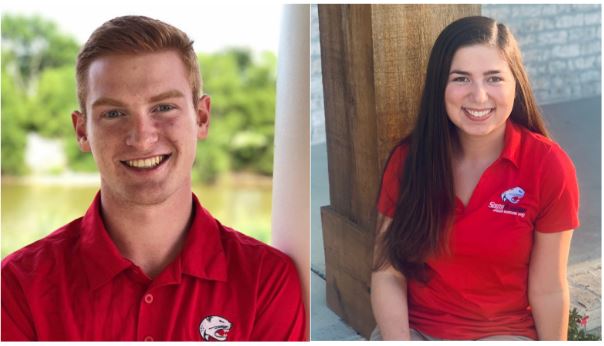 After an extensive interview process that began in the Fall of 2019, the Jaguar Marching Band is pleased to announce the selection of their new drum majors for the 2020-2021 season.  We are excited to welcome Grant Skinner, a sophomore Broadcast Meteorology major and Music minor from Smyrna, TN as our Head Drum Major and Cecelia Prentiss, a junior majoring in Exercise Science with a Spanish minor from Biloxi, MS as our Assistant Drum Major.  Skinner and Prentiss will succeed outgoing Drum Major Alex Linton of Gulf Shores who will begin graduate studies in Veterinary Science at Auburn University and Assistant Drum Major Jonah Hadaway, from Bessemer, who is stepping down to concentrate on his last year of classes at South and was recently given an opportunity to be a campus leader as a Resident Assistant.

Skinner is “very excited to work with the marching band this coming season” as the Head Drum Major.  He said he “looks forward to leading the JMB both as a leader of the band and as an ambassador of the Department of Music and the University”.   Prentiss remarked that she is “excited to be the Assistant Drum Major this coming season as we begin a new chapter of the JMB in Hancock Whitney Stadium.”  She went on to add that “this is a pivotal year for our university, and I am honored to serve in this role.”

Reflecting on her past two years as Head Drum Major, Alex Linton commented "I will cherish these memories forever and am so incredibly grateful to have had the opportunity to serve the JMB and the University in the position of Head Drum Major of the JMB.  I know I will miss it like crazy, but I am so excited to see how the JMB grows in the coming future." Linton went on to say "I am so proud that Grant and Cecelia will be carrying on this legacy.  I know they are going to do an amazing job and they will be great ambassadors of the JMB and USA."

"Due to the University of South Alabama shutting down due to the Coronavirus, the last part of the audition process had to be done remotely through Zoom so that we could complete the interviews and make our decision from the ten finalists” remarked Dr. Jason Rinehart, Director of the Jaguar Marching Band.  “Under normal circumstances we would have a ceremony at the Spring Game to ‘pass the mace’ to the next drum major, but we can’t do that this year” said Rinehart.  Our new drum majors will begin their duties in August with the start of band camp.  “I can’t wait to get started learning the music for our shows this season and to be able to stand up on that podium and conduct the Jaguar Marching Band in our new stadium” said Skinner.

Look for these two new leaders of the Jaguar Marching Band along with the other 250 student-musicians when they “Celebrate” at our first football game on Saturday, September 12, 2020 in Hancock Whitney Stadium.