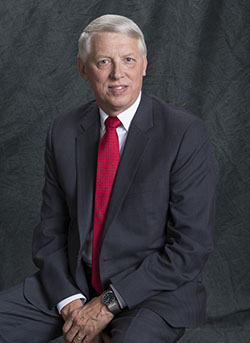 Dr. Tony G. Waldrop was named the third president in the history of the University of South Alabama following a vote on February 6, 2014, by the University’s board of trustees.

Waldrop enrolled in 1970 at the University of North Carolina as a John Motley Morehead Scholar – now the Morehead-Cain Scholarship Program – one of the oldest, most prestigious merit scholarship programs in the United States. Waldrop also attained athletic success at North Carolina, winning two NCAA championships as a mile runner on the track and field team and, in 1974, setting a world record for the indoor mile, three minutes and 55 seconds.

After earning his doctorate, he continued his training at the University of Texas Southwestern Medical Center in Dallas in 1982 as a Research Fellow in the Cardiopulmonary Division, receiving a National Institutes of Health Postdoctoral Fellowship at the Moss Heart Center.

In 1986, he joined the faculty in the Department of Physiology and Biophysics at the University of Illinois, advancing to professor, earning the school’s Arnold O. Beckman Research Award, and recognition as a University Scholar and an American Heart Association Established Investigator. Waldrop served at Illinois in a number of administrative roles and was instrumental in the development of a research park allowing for partnerships between the university and industry.

Waldrop returned to his alma mater in 2001 as the University of North Carolina’s vice chancellor for research and economic development and as a professor in the Department of Cell and Molecular Physiology. Nine years later, he was named provost and executive vice president at Central Florida.

At Central Florida, he was the second-highest ranking officer of the university, providing academic leadership for the university’s colleges, campuses, research centers and institutes, while overseeing academic support services and student services, and responsibility for curriculum, academic planning, faculty appointments, faculty development and promotion, and tenure decisions.

Waldrop is a native of Columbus, N.C., and is married to Dr. Julee Briscoe Waldrop, who holds a Doctor of Nursing Practice degree from Duke University. She has been a professor at the University of Illinois at Chicago, the University of North Carolina and the University of Central Florida. She is a published clinician and researcher and is also an accomplished athlete. They have two adult sons, Cabe and Dallas.