A Lot Goes Into a Little Pill 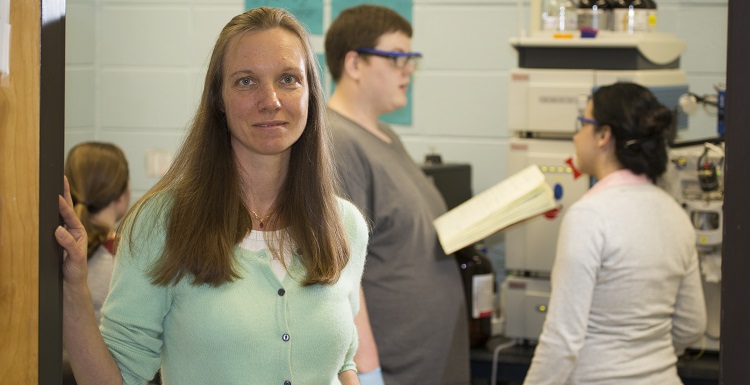 Dr. Sandra Stenson, professor of chemistry, worked at Vertex Pharmaceuticals in Cambridge, Mass., as a research scientist after earning her doctorate.

Dr. Sandra Stenson had no idea how hard it was to create a new prescription drug until she tried it. Stenson, a professor of chemistry at the University of South Alabama, will talk about the processes and pitfalls that drug researchers face — and the reason you should never turn your back on a lab robot — at a USA Science Café event titled “So You Want a New Drug? Exploring Why Prescription Drug Costs Are So High.”

The talk is one in a series of spring community discussions that brings USA experts to Moe’s Original Bar B Que, 701 Spring Hill Avenue in downtown Mobile. Stenson’s presentation, free and open to the public, will take place at 6 p.m. Feb. 7. UPDATE: This event has been CANCELED due to severe weather. Plans are to reschedule for a later date.

After earning her doctorate in 2002, Stenson worked at Vertex Pharmaceuticals in Cambridge, Massachusetts, as a research scientist and analytical chemist. She quickly learned that each step along the way to creating a new drug required complicated, expensive work that might all have to be written off if the drug doesn’t pan out.

Malfunctioning robots, professional drug-testing volunteers who take several experimental drugs at once, chemists who create incorrect compounds that turn out to be unexpectedly useful — Stenson has some fascinating tales to tell.

Here, in her words, are some of the simple questions, and complicated answers, that come up in the process of creating a new drug:

“You assume the sweet little synthetic chemists know how to make anything and everything, but it turns out there’s actually a lot of trial and error that goes into that. Making the compounds that you wrote down on paper is not quite as simple as we assume.”

2. What exactly did you create?

“When I was graduating with my Ph.D., one of our cohorts got a job, and his job was to do solubility testing. And we all snickered. Like, how hard can it be? Either it dissolves or it doesn’t dissolve. So I ended up at Vertex, and one of the things I worked at was solubility testing. And you find out that it’s not quite as straightforward. Everything the sweet little synthetic chemists made, we had to put through an assay to test at what concentration it is soluble.”

4. How do you make it easy to swallow?

“The other thing I never thought about is formulation. The thing has to be a tablet. Nobody wants anything injected. So they have to somehow get it into tablet form and get it to where it doesn’t taste horrible. We had a whole department that worked on that, and they had a little poster on their door that said, ‘Formulate this,’ with a picture of a brick.”

5. How do you manufacture it on a large scale without blowing things up?

“It frequently turns out that to make compound X they had to buy very expensive starting material and or do things like reduce with hydrogen gas. So they walk across the hall with their little balloons of hydrogen, which is of course very flammable and highly explosive. So if you want to make tons of material, you can’t afford to start with an extremely expensive starting material, nor do you want processes that are very dangerous and involve huge amounts of explosive gas.”

Dr. Sandra Stenson is a professor of chemistry at South. She heads a research group that analyzes extremely complicated mixtures found in the natural environment. She said she especially enjoys working with undergraduates in the lab, “getting the kids trained up and building up their confidence in the research setting.” She came to the United States from Germany as a teenager in 1992 because “my mom wanted to get away from cold weather and high taxes.” They wound up in Naples, Fla.. Stenson earned undergraduate and doctoral degrees in chemistry at Florida State University. After three years at Vertex Pharmaceuticals, she came to South in 2005.