'This Is My Place:' South Grad's Work Earns Statewide Recognition 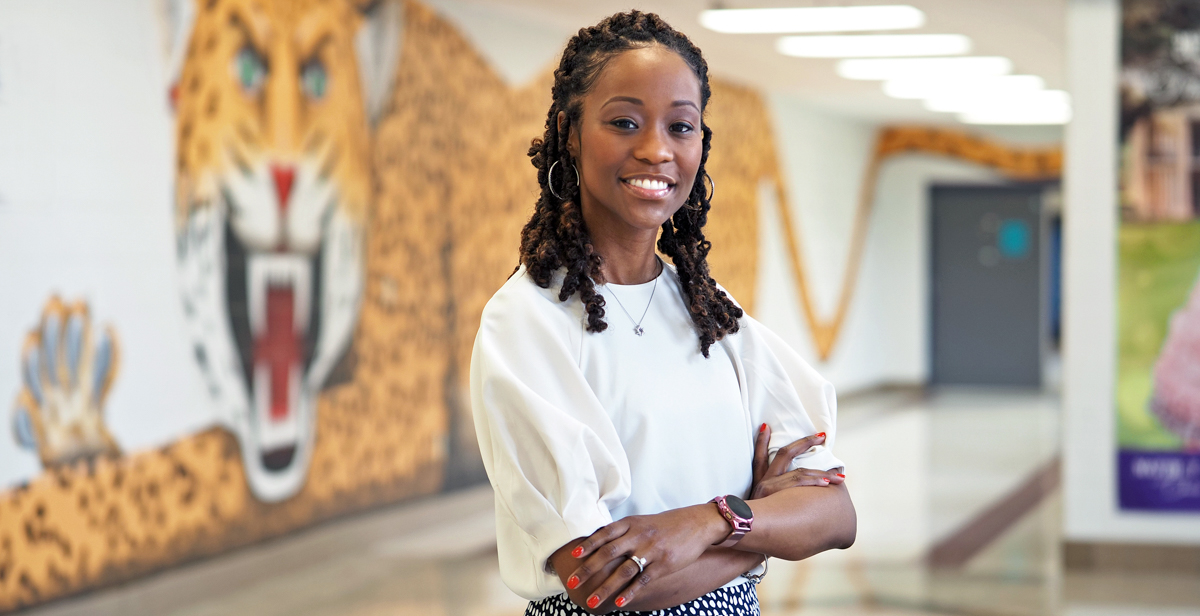 Darlene Lewis, who earned a bachelor's degree and then a master's in school counseling from the University of South Alabama, works with students at Blount High School in Prichard, her hometown.

After earning a bachelor’s degree in education at the University of South Alabama, Darlene Lewis became a kindergarten teacher at Holloway Elementary School.

While teaching in Mobile, she earned a master’s degree from South in school counseling and began working as a counselor at Craighead Elementary School. Now she’s a professional counselor at Blount High School, where some of the students look familiar.

“I’m seeing kids that I taught in kindergarten, during my early days of teaching, and now they’re students here,” Lewis said. “That‘s very rewarding. They stay attached to you. They know you. They want to be around you and they still need your help.

“One of my kids was singing in the chorus room one day. He’s super talented. And I was like, ‘I had no idea that’d be you one day.’”

Dr. Amy Upton, an assistant professor in the department of school counseling at South, was impressed with the Program of Distinction effort in Mobile. She’s known Lewis since she was a graduate student.

“Since then, she’s really done some amazing stuff,” Upton said. “Every time I think she’s found a place, she seems to reach higher and get there with energy, focus and a smile on her face. She is determined, she is positive, she is strategic. She loves the work she does and never shies away from that next challenge.”

Lewis, 35, grew up in Prichard, north of Mobile. Her father worked two and three jobs to make ends meet. Her mother was a stay-at-home mom.

Sometimes her home life was uncertain, often relying on family and friends for support, but nothing affected her love of learning.

“School was my safe haven, my safe place,” Lewis said. “That’s where I excelled. I’ve never been out of school, really. This is my place.”

She attended Vigor High School, where she made good grades. She couldn’t afford many extracurricular activities, but was active in the Junior ROTC and became commander of the Color Guard during her senior year. Yet she wasn’t on track to further her education.

“When I left high school,” she said, “I was one of those students who didn’t understand the ins and outs of applying to college and looking at scholarships or grant money.”

With advice from her aunt, Lewis began studying hairstyling at Bishop State Community College. One of her advisers, Katina Simpson-White, urged her to take general education courses as well. Again, she made good grades, but this time she had goals in mind.

She earned an associate degree in sociology and then a bachelor’s degree in elementary education at the University of South Alabama.

“Before I even transitioned, I had a plan,” she said. “I knew what courses I was going to take and when I was going to graduate. I didn’t have much of a campus life. I worked as a certified pharmacy technician at Rite Aid and as a paraprofessional for Mobile County Public Schools.”

At South, she did enjoy classroom discussions with students from all walks of life. It made things more interesting. Part of her education.

After graduation, Lewis taught kindergarten for five years at Holloway Elementary, where she enjoyed family connections at the school.

“My aunt, Deborah Adams, one of the women who raised me, was the cafeteria manager at Holloway,” she said. “So teaching there was like being at home with momma.”

It was her grandfather — Joe Lewis, a Mobile jazz musician — who encouraged her to return to South and get her master’s degree. She did, earning a degree in school counseling in 2015. She worked at middle schools before moving up to Blount High School.

Lewis doesn’t care for the old-fashioned title of “guidance counselor.” Today, school counselors help students prepare academically, as well as socially and emotionally. Her goal is to anticipate the challenges and problems facing her teenagers.

“You want to be proactive in what you do,” she said. “That’s why it’s so important to come in every day with a plan.”

Last year, Lewis married Jeremy Stradford, a biology teacher at Williamson High School. They were introduced by one of their colleagues.

He’s interested in golf and bicycling, while she prefers reading and staying at their home in Midtown. She does enjoy swimming, a sport she picked up while mentoring the Marlins Swim Team at the Dearborn YMCA.

In the community, Lewis is a member of the Junior League of Mobile. She’s active in her church, the Gulf Coast Christian Center. In her spare time, she’s a Mary Kay beauty consultant.

A few years ago, she did some local modeling. In 2008, she was a member of the royal court for the Mobile Area Mardi Gras Association.

“It was fun — and hectic,” she said. “Five days of running from here to there, with all the different outfits.”

Lewis may have moved to Mobile, but she remains proud of her roots in Prichard. She wants to make sure all of her students know about the opportunities available to them. School work is one way to give back to her community.

Even at Blount, she remains loyal to her alma mater, Vigor, which is a longtime rival.

She supports the Prichard community, no matter the school. At her church, mentors are called “destiny helpers” — people who you get where you’re supposed to be. At her high school, she strives to be professional as well as compassionate.

Lewis hasn’t planned her school career in Mobile, but already she has worked at the elementary, middle and high school levels. One day she might be interested in becoming a supervisor or taking a position in school administration.

“I’ve never had a path in mind, but I’ve always been offered jobs,” she said. “You know, ‘Come to our school. We hear good things about you.’ So I’ve been blessed in that.”